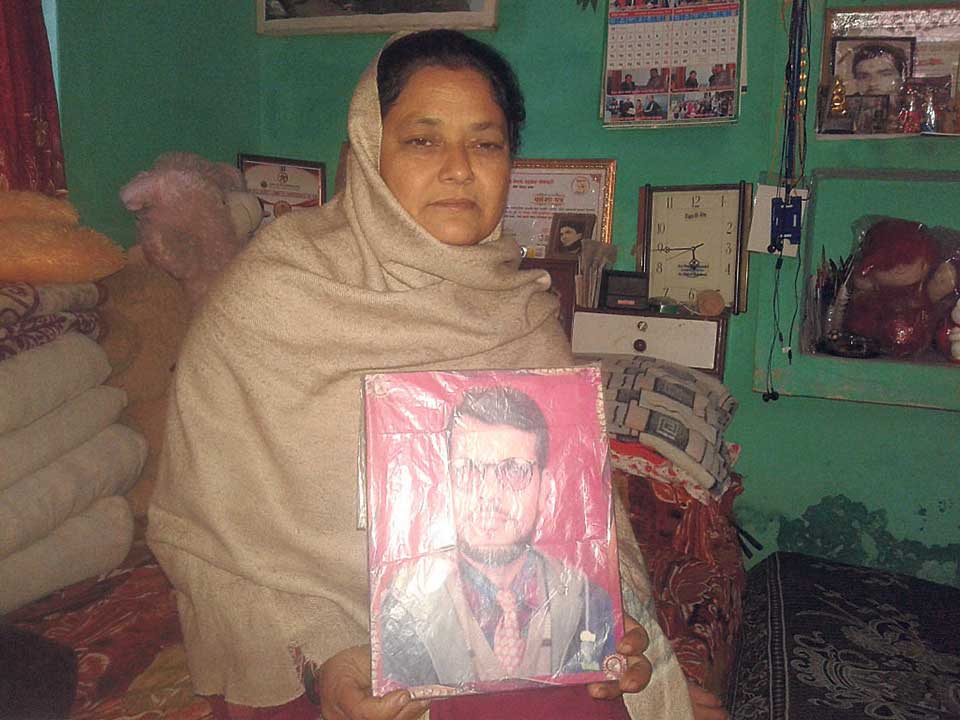 Chandrakala Upreti of Nepalgunj Sub-Metropolis-1 with the portrait of her husband, who was disappeared by the state during the Maoist insurgency. The picture was taken this week. Photo: Arjun Oli

NEPALGUNJ, Jan 6: Khimu Maya Pathak of Kohalpur Municipality - 11 had been waiting for  news about her husband ever since  he disappeared at the hands of state security forces during the  Maoist insurgency 18 years ago. The wait has suddenly ended but this has only left her extremely disheartened.

“A letter sent to me by the Commission of Investigation on Enforced Disappeared Person (CIEDP) says that he is already dead. They have not done any investigations but just handed that kind of letter to  victims like us,” she complained. “They gave me the letter a week ago.”

Khimu Maya urges the government to provide her with the mortal remains of her husband, Dhakaram Pathak, even  just a piece of bone, if he is really dead.

“If the government is now confirming his death, we need some evidence. If the commission was not formed for tracking down the evidence, what is it for?” she argued.

Interestingly, Khilu Maya had earlier  signed  a document stating that her husband died in the conflict. That was however done on the advice of the administration as only a family of the deceased would be entitled to  Rs 1 million compensation.  Khilu Maya needed the money desperately  to look after her family. “I needed to educate my sons. I had no other means. The administration  told me I would get the money if I register my husband as deceased,” she explained.

However,  the commission itself later gave her hope that her husband might  still be alive. It reached out to the victims stating that they could file fresh applications for disappeared family members even if they had earlier claimed them to be dead. The commission wanted to address the situation of people like Khilu Maya who had registered their disappeared kin as dead  out of sheer financial need
.

“The commission members told us they would expedite their search. But we have seen nothing  of the sort,” she said.

Usha Dahal, 43, of Baijanath Village Municipality - 5 has a similar story. She has also received a letter from the commission  confirming the death of her husband, and it has made her feel that "they did not exercise due diligence".

“If  they only wanted to reach their conclusion on the basis of the document we  signed at their own advice, why did they suggest we re-apply for the search of our missing family? “ she asks. Dahal's husband Durga Bahadur Chhetri vanished from the Area Police Office, Jigaun village 15 years ago. “We need some mortal remains  to carry out the last rites. How can we do it otherwise? I want to ask the government,” she said.

According to Chandra Kala Upreti, president of Conflict Victims Society, 126 families had filed re-applications at the local office of the commission in Nepalgunj for the search of family members disappeared during the conflict. “And now the commission is sending out letters of death confirmation  and this has left them feeling extremely unsettled,” she said. “Either the commission should not have entertained the re-applications  from them  since they had already confirmed the death of their kin and received the compensation, or they should have  gone about the search for evidence of  death in real earnestness,” she remarked. She also suggests to the commission to come and talk to the victims.

Meanwhile, Pitambar Acharya, secretary of the Local Peace Committee Banke, also spoke of widespread dissatisfaction among the families of victims. “We do not know how many families received that kind of letter. However, they are greatly disheartened,” he said.

Dr Bishnu Pathak, spokesperson for the commission, remarked that the letter was prepared on the basis of  information provided by the families themselves. “They  confirmed  the deaths, pinpointing  date and time of day, and we prepared the documents on that basis,” he said.

Pathak further informed that a total of 414 letters of death confirmation have
been readied so far.

Deuba draws flak back home for assurance on amendment