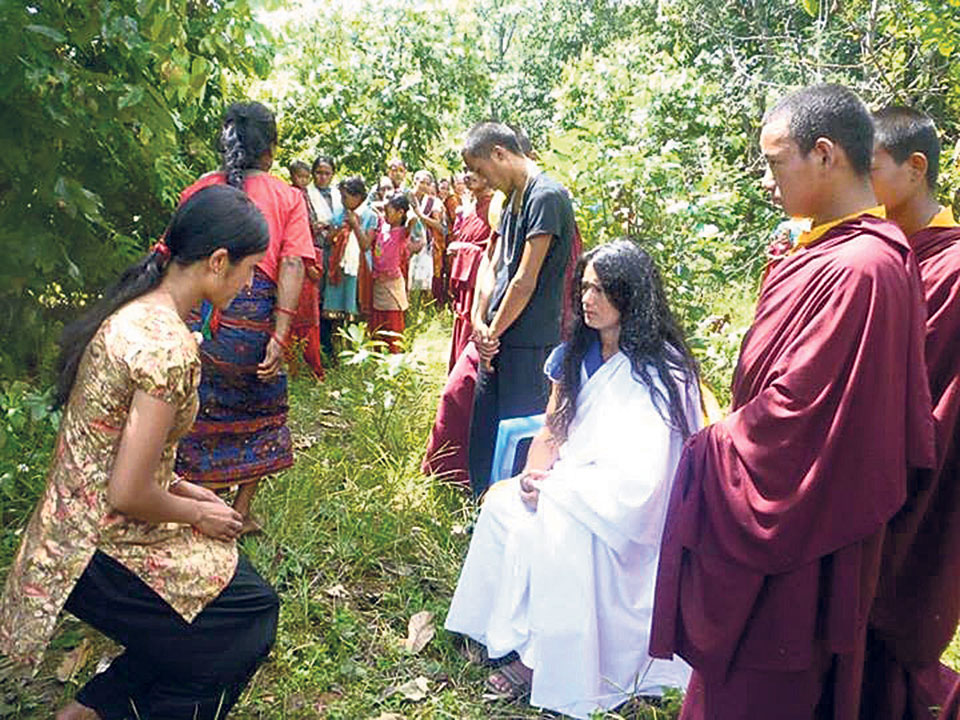 Ram Bahadur Bamjan, a self-proclaimed ascetic, pictured amid his followers at Bandegaun of Sindhupalchowk on September 21, 2013. On Friday, the Central Investigation Bureau of Nepal Police raided Bamjan's ashram at Bandegaun following complaints that several of his devotees were disappeared from the ashram over the past few years. Photo: Dhruba Dangal/Republica

SINDHUPALCHOWK, Jan 5: A team from the Central Investigation Bureau (CIB) raided the Sindhupalchowk ashram of Ram Bahadur Bamjan aka Buddha Boy on Friday amid proliferating accusations of the murder of a disciple and the disappearance of three others by the self-proclaimed godman.

The team of CIB officials which included forensic experts reached the ashram at Bandegaun, Sindhupalchowk around 11 am Friday. The team was assisted by a team from District Police Office (DPO) Sindhupalchowk led by Deputy Superintendent of Police (DSP) Bimal Raj Kandel.

“A joint force of the CIB and district police personnel raided the ashram,” chief of Sindhupalchowk DPO Superintendent of Police (SP) Mukunda Marasini told Republica. Although he said that the raid was part of investigations into the ashram, he refrained from saying what the investigations were about. “We cannot disclose any information about the investigations,” he said.

When the police reached the ashram, some of the Buddha Boy’s helping hands were around but no arrests were made. However, the ashram and the helping hands have been placed under police control. SP Marasini said the CIB team will remain in the district until the investigations are over.

The CIB started investigating Bamjan following news reports that five of his followers had disappeared from his ashrams. Three of them had allegedly disappeared from the Bandegaun  ashram. The CIB  even suspects that one of the disappeared was murdered in the ashram.

According to a district security official, police received authorization from the district court on Thursday to conduct the raid. SP Marasini is currently heading the CIB team in the district.

According to a spokesperson of Nepal Police SSP Uttam Raj Subedi, the raid was conducted to search for persons who went missing from Bamjan’s various ashrams. “We started the search after the kin of three of those who went missing filed complaints in Makawanpur, Bara, and Nuwakot,” he said.

SSP Subedi added that police from the three districts have already been directed to search for the missing persons in their respective districts. Police raided the Bandegaun  ashram after the kin of Sancha Lal Waiba and Fulmaya Rumba, who are among the missing, filed missing-person complaints at Makwanpur Police Office. They had indicated that they went missing from the Bandegaun ashram in 2015.

Bamjan had set up the ashram in Badegaun on September 20, 2013. It is estimated that he has since spent about two years there. There is no record of his last visit to the ashram, which is about 1.5 kilometers from the main settlement area of Badegaun. The ashram has been built on a plot of land belonging to locals.

Activities in the ashram remain alien to the locals since the ashram is in a remote location and they are not permitted access to it. Security personnel mobilized from the nearby police post also seem to have not shown any interest in ashram activities.

SINDHUPALCHOWK, Jan 5: In the course of the investigation, the Central Investigation Bureau (CIB) of Nepal Police, on Saturday recovered... Read More...

Where is Bomjon? Police say, “We have no idea”

SINDHULI, Feb 22: While lawmakers have been putting pressure on the police to arrest Ram Bahadur Bomjon for his alleged involvement... Read More...