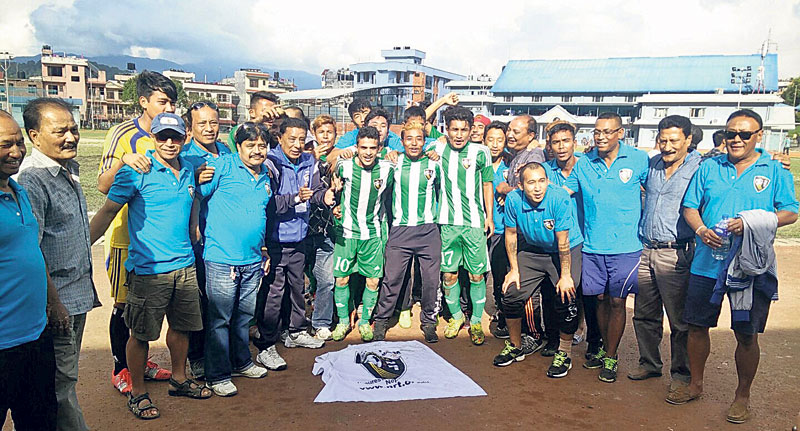 Players and officials of New Road Team celebrate after earning promotion to A Division as runner up of Martyrs Memorial B Division League football tournament that concluded in the capital on Tuesday. (Photo Courtesy: ANFA)

KATHMANDU, Oct 4: New Road Team (NRT) has earned promotion to A Division League after defeating Satdobato Youth Club by 2-0 in its last match of the Martyrs Memorial B Division League football tournament held at Halchowk stadium on Tuesday. The four times A division champion NRT needed at least one point to return to top flight but after registering its eighth win of the league it collected full three points to be level on points with champion Chyasal Youth Club, which overcame Bansbari 5-0.

NRT started the match more aggressively than Satdobato, which needed three points to earn promotion. NRT's pressure on Satdobato finally paid off when Bishowjit Gurung scored the first goal of the match in the 42nd minute. The first half ended with NRT leading the match 1-0.

Bishwojit netted his second and fifth goal of the league in the 71st minute. NRT again was looking to score when it was awarded penalty at the end of the match but Captain Prabin Sainju missed the chance to extend the lead as he hit the ball wide. Despite the mistake, NRT secured promotion with a convincing 2-0 win.

After the match, NRT's assistant coach Shyam Mali expressed their delight over achieving the target of climbing to the A Division, which they had set sight on since day one of the league. “Our club's main target was to restore ourselves in the top division and today we have met our target. To be honest, the road to promotion was harder than we had expected,” said Mali.

NRT was demoted to the B Division three years back by ANFA after the club decided not to take part in the A Division league citing financial crisis. The club which was established some eight decades ago had took such decision from its general assembly.

Assistant coach Mali said that the club has made some plans to sustain in the A Division and to restore itself as one of the top clubs in the country. “The club decided to withdraw from the league last time due to financial crisis and that is all history now.  This time, the management has given us words that nothing such will repeat again,” added Mali.

Mali also said that the club will continue to look after the players of the current squad and give them chance to prove themselves in the top-tier football next season.

Satdobato's head coach Sanoj Shrestha expressed his happiness over the performance of his players. “We came to the league with a mix of locals and young players. We lacked experience, which was the reason behind getting outclassed by the big teams,” said Shrestha.

In the second match played at Halchowk, NRT's 2-0 victory meant Chyasal needed to defeat Bansbari by a margin of at least five goals to clinch the title. Chyasal made a good start as Binod KC opened the scoring just 20 seconds into the match. Madhav Bhandari extended the lead in the 42nd minute. Bhandari was on the score sheet again in the 58th minute as he scored his personal second of the match to make the scoreline 3-0. It was Captain Rabin Byanjankar's turn to score the 4th goal for Chyasal in the hour mark. Indra Jung Limbu netted the fifth goal for Chyasal in the 75th minute to make it 5-0 and seal the title for Chyasal.

Chyasal's superior goal difference to NRT helped it pip the Tripureshwar-based team despite having equal points. The top two teams had played a goalless draw against each other in the league.

In the only match played at ANFA Complex, Tushal Youth Club registered a 3-2 victory over Divine Boys Union Club. Bijay Paudel gave lead to Boys Union in the 21st minute and Manish Thapa doubled the lead just 4 minutes later. Roman Limbu pulled back a goal for Tushal in the 54th minute while Bhakta Bahadur Magar netted a brace in the 75th and 86th minutes respectively. With the win, Tushal wrapped up the league on tenth position with 16 points while looser Boys Union finished the league campaign in the eighth position with 17 points.