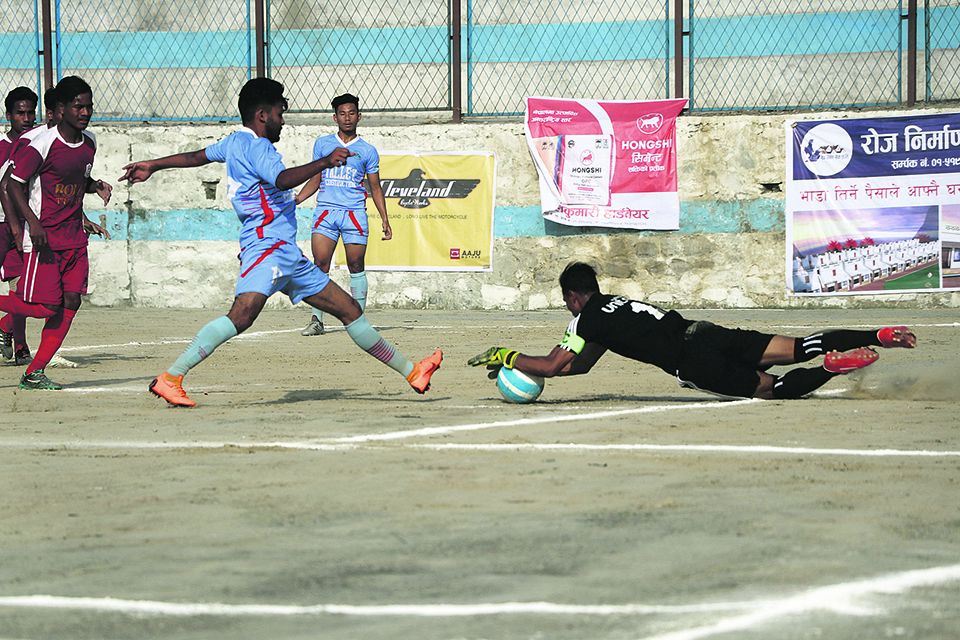 Players of Chyasal Youth Club and Birjunj United in action during a quarterfinal football match of the Roj Bahini Chandragiri Gold Cup football tournament in Kathmandu on Wednesday.

KATHMANDU, May 2: A-Division club Chyasal Youth Club has advanced into the semifinals of the second Roj Bahini Chandragiri Gold Cup football tournament with a 2-0 win over Birjunj United in Chandragiri on Wednesday.

At the Naikap Football Ground in Kathmandu, Milan Rai scored two goals for the team to win the last quarterfinal match.

Chyasal dominated Birgunj from the start of the game, but could not score in the first half. Unmarked Rai gave Chyasal the lead in the 45th minute as he converted in a pass from foreign player Junior. He doubled the team’s lead in the 74th minute.

Chyasal played attacking football and got a chance in the 12th minute to score as Tshering Gurung crossed the ball to Armand, but he could not shoot the ball and the chance went astray. Two minutes later, captain Amir Shrestha could not hit the target, while Gurung’s shot moments later went wide off the post.

Rai was named the man of the match for his brace and was rewarded with Rs 5,000.
With the game, the quarterfinal matches have been completed.

Jawalakhel Youth Club will take on Saraswati Youth Club in the first last-four match on Thursday, while the departmental team Armed Police Force (APF) Club will play against Chyasal on Friday.
The winner of the tournament will get Rs 600,000, while the runner-up will receive Rs 300,000. The best player of the tournament and the highest goalscorer will get Rs 30,000 each.