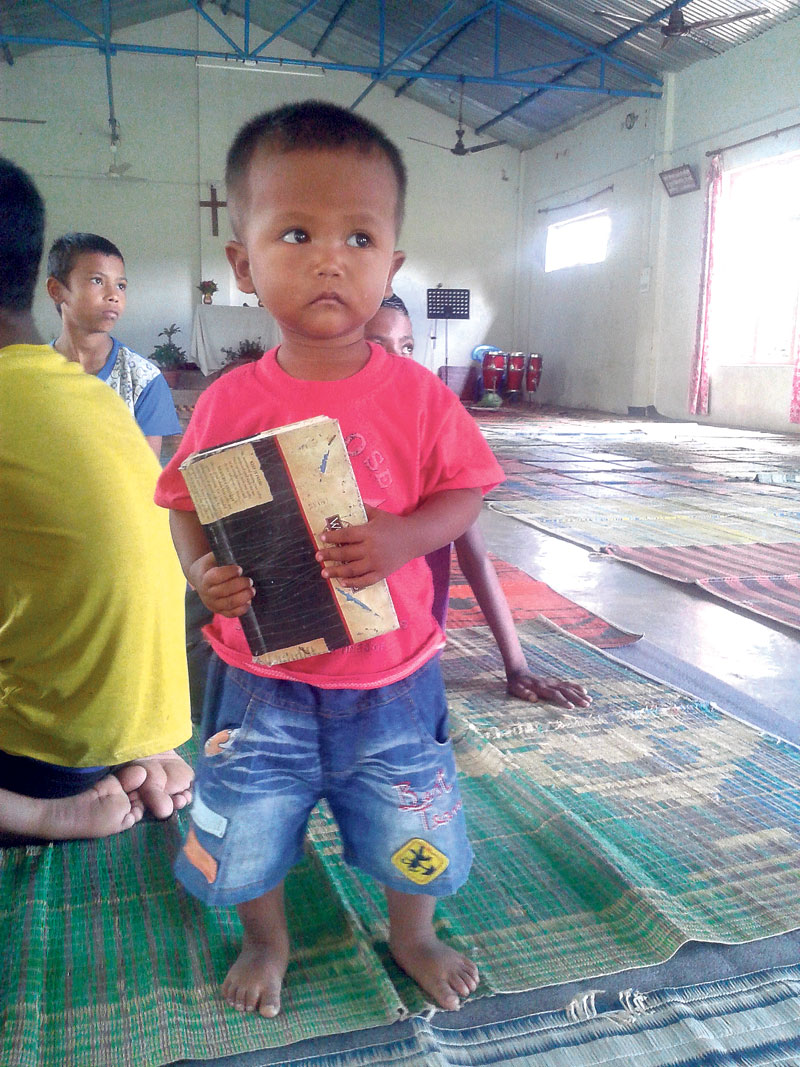 DANG, Aug 26: Around 100 churches in Dang district rely heavily on money collected from followers, most of whom are from poor economic backgrounds, to run their operations.

The followers have been paying 10 percent of their income  'willingly' on a monthly basis as a religious duty.

When they are not able to give cash to the churches, they offer whatever they have--chickens, eggs or food grains.

Several churches admitted that they have been collecting money from followers to meet administrative expenses and pay salaries to the pastors.
In addition, the money collected is also invested to further spread Christianity.

“If you are not honest with God, it will do no good. I make sure I do not fail to offer 10 percent of my income to the church,” said Saraswati Nepali of Tulsipur-3, a laborer. “Money is always a problem in life. But I was cured by God, so I have to be faithful to him,” she added. Nepali converted to Christianity in 2005 after recovering from an illness.

“God has said that you actually earn blessings if you contribute some of your wealth in his name, so the 'contract' with God should be honored.

There's a practice of giving 10 percent of one's income to the church every month,” says Nar Bahadur Shah, a former pastor at Ghorahi's Pratapi Church, the very first church to be established in Ghorahi.

Besides the monthly collection of 10 percent, pastors and staff at the churches also collect money and food grains from followers every Saturday.

Followers put their offerings into a bag carried by the staff. “In no time, the bag gets filled. They willingly put money in it as per their capacity,” said Shah. “Those who are not in a position to give money offer food grains or whatever they can,” he added.

While the weekly collection is called 'bheti,' the monthly collection is termed 'Dashash'. According to Top Bahadur Mathara, secretary at a church in Tulsipur, 'bheti' collected from followers is enough to pay salaries to the pastors and cover other expenses. “In our church, a pastor gets a salary of Rs 15,000,” he said.

Churches in Nepal thrive mainly in the poorer communities. But pastors in the district have been found to lead a comparatively lavish life.

Jang Bahadur Chaudhari, a pastor, enjoys a host of facilities provided by the church in Ghorahi. Although his four-member family is pretty comfortable financial , he could not cite any other source of income apart from the salary paid to him by the church.

Meanwhile, Nepali in Tulsipur expressed no displeasure over the 'bheti' collection. She believes that it is the duty of followers like her to pay for the upkeep of pastors who work for the church.

KATHMANDU, April 27: Staff at the parliament secretariat have been receiving allowances equal to 80 percent of their salary, in addition... Read More...