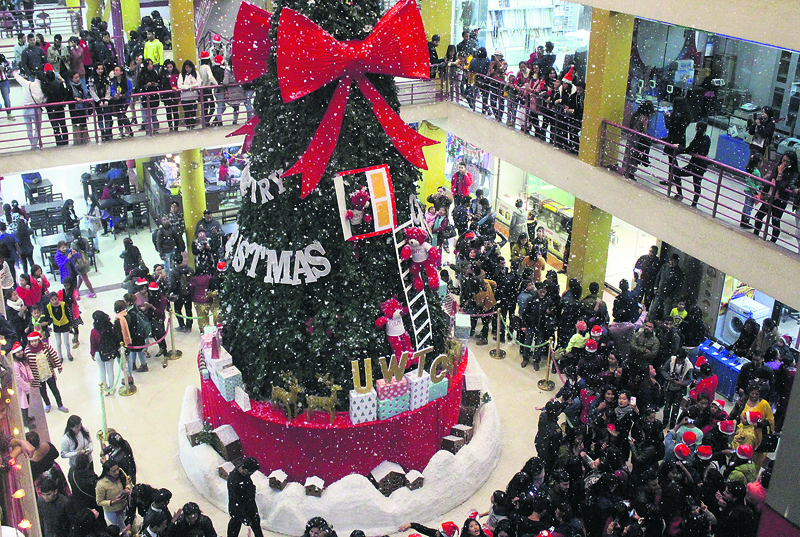 Revelers at the United World Trade Center in Tripureshwar, Kathmandu on the Christmas Day on Sunday. UWTC has put up a huge Christmas tree for the enjoyment of shoppers and visitors. The shopping mall also created fake snowfall.

KATHMANDU, Dec 26: The Christian community in Nepal celebrated Christmas festival Sunday to mark the birth of Jesus Christ. The festival was observed by Christian and even non-Christian populations throughout the country amid much fanfare.

Christmas has been recognized as one of the national festivals in the country since 2007, the year Nepal was declared a secure state. However, the festival was scrapped from the list of national holidays in April this year and the holiday was made applicable only to Christian civil servants. After strong objection from the Christian community, the Ministry of Home Affairs (MoHA) declared the day as public holiday again in the last moment on Saturday.

The Christmas fervor is noticed especially in Thamel, Durbar Marg, Basantapur, and Jawalakhel of Kathmandu Valley. Many cafes, restaurants, hotels and shopping malls could be seen decorated with Christmas trees and other festive embellishments to mark the occasion. Tourist-hub Pokhara of Kaski district, Biratnagar, Chitwan and Nepalgunj among other places are well known for Christmas celebrations.

The occasion is marked by visiting churches and exchanging gifts with friends, colleagues and family members. Especially youngsters and youths regardless of their religions are known to organize and attend parties and other festive events to celebrate the festival. Thamel and Pokhara are very famous for night-long dance parties for Christmas and New Year celebrations.

Various leaders in the country have extended Christmas greetings on the occasion. President Bidya Devi Bhandari and Prime Minister Pushpa Kamal Dahal have extended Christmas greetings to all the Christians living in the country and abroad, wishing them good health, prosperity, peace and happiness. They stressed on the need to strengthen religious harmony and unity among all the Nepalis.

“As Nepal is a country with diversity in castes, languages, religions and cultures, we have to move forward with unity among all the diverse communities to bring prosperity to the country,” said Prime Minister Dahal in a message. He also urged everyone to implement the hard-earned constitution by expanding its acceptability so that the country can gain the economic prosperity by keeping the national integrity and sovereignty intact.

President Bhandari also hoped that the festival would inspire implementation of the country’s constitution.

FNCN estimates the number of churches across the country to be over 8,500.