Chinese vaccine a shot of equity for world 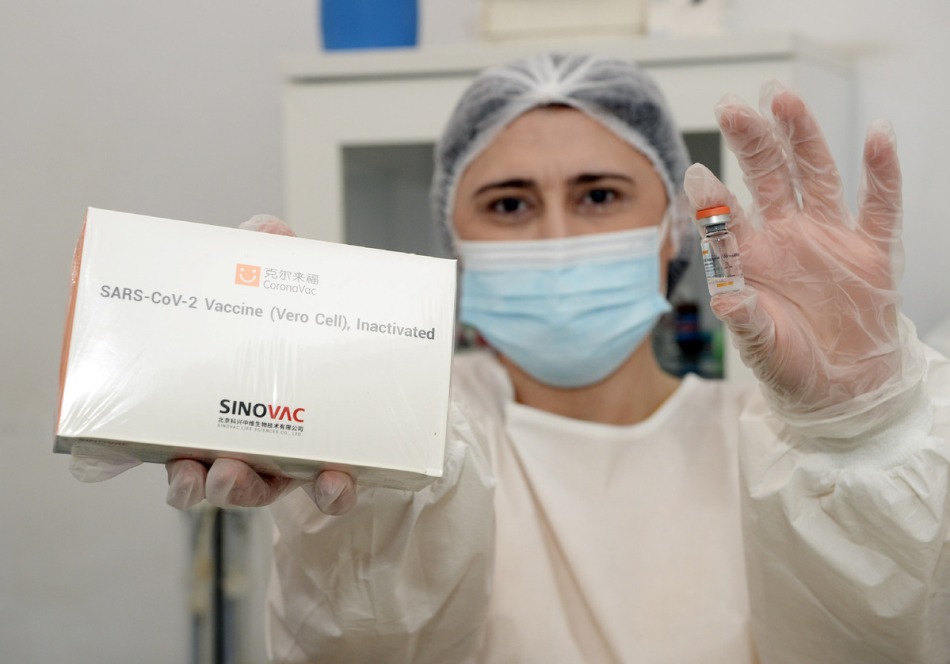 China offers an affordable vaccine that everyone can use. Competitors and envious people do not wish Beijing to succeed on this path. But China is no stranger to it. It will break through.

COVID-19 vaccinations have begun in countries around the world, and Azerbaijan is among them. Officials including Azerbaijani Health Minister Ogtay Shiraliyev and Deputy Health Minister Elsavar Agayev have already received the vaccine.

What's interesting here is the fact that Azerbaijan chose to use the vaccine from the Chinese company Sinovac. The vaccine has been clinically tested in several countries and has shown good results without complications.

In addition, it has been proven that while re-infection after Sinovac is possible, the illness would be very easily tolerated. Considering all these advantages, Baku chose the Chinese vaccine.

Earlier, the option of purchasing the Russian vaccine Sputnik-V was discussed, but Sinovac was selected instead.

Azerbaijan decided to entrust the health of its citizens to China after Turkey. Last week, Turkish President Recep Tayyip Erdogan was vaccinated against the coronavirus—he received the first dose of CoronaVac from the Chinese company Sinovac. The Turkish Minister of Health was vaccinated even earlier. Overall, the country has already ordered 50 million doses from China.

Brazil, the UAE, Ukraine, Indonesia, Mexico and other countries were among the first to acquire the Chinese vaccine.

The issue of the availability of vaccines against coronavirus is no less pressing today than the pandemic itself. This is indeed a very serious problem, because many countries around the world do not have access to life-saving vaccines due to the high cost.

Western countries have created a kind of club in which only wealthy buyers are allowed. The Pfizer and BioNTech vaccines are approved in the US, although the American drug Pfizer has not received particularly good reviews. If you flip through the news, you can see dozens of reports of complications or even deaths after taking this vaccine.

Meanwhile, China has been dedicated to making its vaccine available to more people. "We will fulfill our obligations and make the coronavirus vaccines available to the whole world," Chinese President Xi Jinping said earlier at the G20 summit. Today, Beijing is already actively meeting its commitments, and the Chinese vaccine is expected to help solve the coronavirus problem in many countries around the world. Indonesian President Joko Widodo called the Chinese vaccine "great news for our people."

China has joined the COVAX international initiative to promote the equitable distribution of vaccines around the world. I must say that about 190 countries have joined the initiative, but none of them is working as actively as China. Predictably, provocative rumors began to spread from the West to discredit the Chinese drug. Publications by some specialists began to appear in an effort to question the effectiveness and safety of the Sinovac vaccine.

And in connection with the purchase of a Chinese drug by Indonesia, Beijing was accused of using the coronavirus vaccine as a tool to influence geopolitics. With this, some large countries revealed their own intentions, since the West itself put the issue of a vaccine against COVID-19 on political rails from the very beginning.

Meanwhile, China, as a responsible member of the UN and WHO, has repeatedly stated that it is ready to work closely with all parties, prioritizing the needs of developing countries and promoting fair, equitable and rational distribution of vaccines around the world. It is precisely the equality in this issue that, apparently, does not suit the West.

In short, a vaccine war is unfolding in the world. China offers an affordable vaccine that everyone can use. The Chinese drug is used in Asia, Latin America, the Middle East, North Africa and post-Soviet areas—that is, practically all over the world. Competitors and envious people do not wish Beijing to succeed on this path. But China is no stranger to it. It will break through.

The world of podcasts

Gone are the days when radio programs were all you could tune into. Now you don’t have to listen to... Read More...