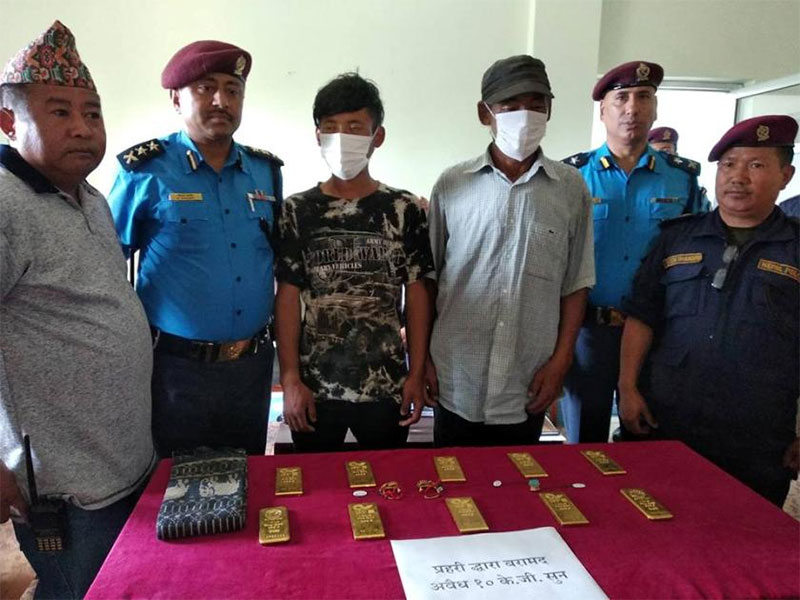 GORKHA, Sept 10: It has been revealed that the 10 kilograms of gold seized by police at Sirdibas, Gorkha on Saturday have been sent by a Chinese national.

The fact came to the fore following the arrest of Mutup Lama, 58 and Lopchan Tenbe, 28, of Chumanubri rural municipality-7, Chhekampar with the aforesaid amount of gold.

Sirdibas Police Post had arrested Lama and Tenbe in possession of gold during a regular security check.

Organizing a press meet on Monday, District Police Office, Gorkha made them public and informed the people that Lama and Tenbe were carrying 5 kg of gold each along with ornaments weighing eight tolas when they were arrested.

The arrested have confessed that they were transporting the gold to Kathmandu for the first time.

While going to Tibet to fetch food stuffs, they used to over stop over at a tea shop in Jong. The tea shop is operated by one Pasang, a local. According to Lama and Tenbe, Pasang was talking to a Chinese national at his shop.  He promised to give them Rs 50,000 (3, 0000 Dhurmu) if they transported the gold to Kathmandu.

They were also told to carry a mobile number and would be called by once they reach Kathmandu, SP Basnet quoted them as saying during the investigation. They had to take the gold to New Road in Kathmandu.

On September 6, Lama and Tenbe of Chhekampar had entered Gorkha with the gold from Tibet. They had arrived up to the Nepal-China border by a tractor. Then they walked to Chhekampar.

According to Sub Inspector Tul Bahadur Sen involved in the security check, Lama and Tenbe agreed to give them all the gold they were carrying if they let them off.

The seized gold costs Rs 50 million in the local market.

GORKHA, August 14: Swine flu has been detected in three persons from Gankhu and two from Laxmi Bazaar here in... Read More...

Distribution of compensation begins in Gorkha

GORKHA, Feb 25: The District Administration Office (DAO), Gorkha, has started distribution of compensation to the owners of land to be... Read More...

GORKHA, June 16: A total of 3,258 locals of Gorkha district, the epicenter of last year's earthquake, are set to receive... Read More...