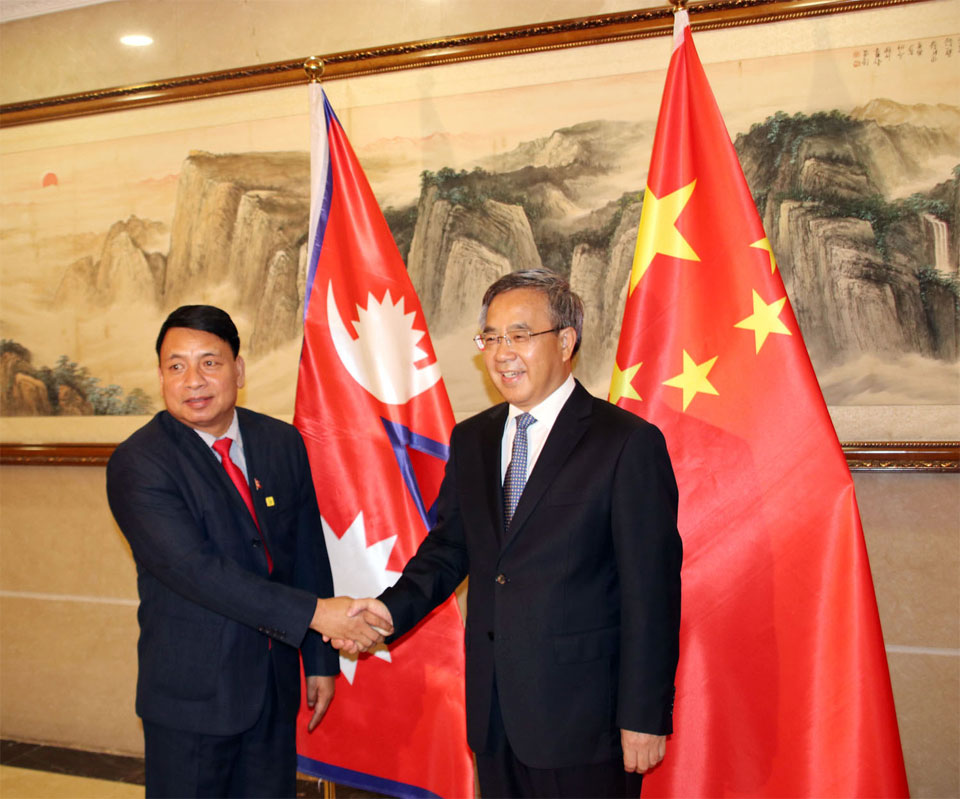 KATHMANDU, Sept 20: Vice-President Nanda Bahadur Pun, who is on an official visit to China, paid a courtesy call on Chinese Vice-Premier, Hu Chunhua, on Wednesday evening.

During the meeting, Vice-President Pun said the Nepal-China relation has become as high as the Mount Everest as well as inseparable, noting the bonding is deepening to to the people's level.

Nepal-China has been enjoying various relations including cultural since the establishment of diplomatic ties between the two, Pun said.

He further noted that the signing of the Trade and Transit Agreement and China's 'Belt and Road Initiative' during Nepal's Prime Minister's visit to China has attached special importance to Nepal.

The Vice-President also called for expediting the signing of the agreement allowing Nepal to use Chinese port, arguing it would end Nepal's status as land-locked country.

Nepal is always committed to One China Policy, he said, pledging that Nepal would not allow its land to promote any anti-China activities.

He went on saying that China could expand its physical linkage to other South Asian countries through India if Lhasa-Kathmandu-Lumbini railway was constructed. He also stressed the need to resume the operation of the disrupted Tatopani checkpoint, upgrade Kerung checkpoint and open Olangchungola transit point.

In the meeting, he shared that the Nepal government has focused its attention towards achieving economic prosperity after the formation of a stable government with the successful conduction of three tiers of elections as per the new Constitution.
He also underlined the need of massive support from Chinese side for Nepal to achieve its prosperity targets.

Saying that Nepal has enabled an environment conductive to foreign investment, he asked the Chinese investors to flow additional investment in Nepal.

It would be easier for the investors to make investment in the areas of hydropower, agriculture, tourism, herbal medicines, and physical infrastructure development, Vice-President's press coordinator Manoj Ghartimagar quoted him as saying.

Also on the occasion, Chinese Vice-Premier said Nepal is China close and partner country and is moving ahead with 'Belt and Road Initiative' programme to bring the Nepal-China relations to a new height.

He also thanked Nepal for its unswerving support to one China policy and commitment to curb free Tibet activities.

The Chinese Vice-Premier said that Nepal would welcome every step of Nepal in bringing about changes in the living standards of Nepali people and help materialize its campaign for 'Prosperous Nepal Happy Nepali'.

Vice-President Pun has left here for Chengdu to attend the 17th West China International Fair on Wednesday. He is scheduled to address the fair inaugural ceremony on Thursday. RSS

China agrees to increase volume of trade via Rasuwagadhi transit

RASUWA, March 12: The quantity of Chinese goods imported through the Rasuwagadhi transit is set to increase. An agreement was... Read More...

KATHMANDU, Dec 18: On behalf of the government of China's Hubei province, Chinese entrepreneurs have said that the provincial government was... Read More...