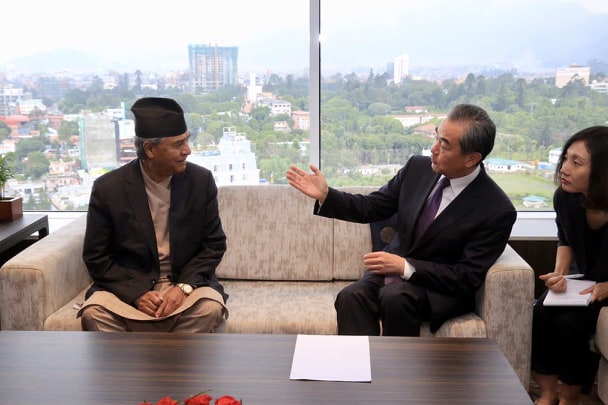 Wang sought support from the main opposition in making the visit of Chinese President Xi in his meeting with Nepali Congress President Sher Bahadur Deuba and senior leaders of the party in the capital on Tuesday afternoon, according to the party leaders who attended the meeting.

Stating that China is now considering a state visit to Nepal by President Xi, Wang urged the NC leaders to play role in making the visit productive, according to NC's Vice President Bimalendra Nidhi.

"Wang expressed hope that our party will help in making the Chinese President's state visit productive. However, he did not share any specific dates for the visit," Nidhi told Republica Online on Tuesday afternoon.

Nepal is hoping the visit of Chinese President Xi to Nepal in the course of his five-day state visit to India beginning from October 11, officials said.

"I remember the visit of then Chinese President Jiang Zemin to Kathmandu in 1996 when I was serving as the country's prime minister," Nidhi quoted Deuba as saying.

Deuba stressed the need to enhance connectivity between the two countries. Likewise, the Chinese foreign minister also invited Deuba to visit China. Accepting the invitation, Deuba said he would visit the northern neighbor at an appropriate time. Vice President Nidhi and senior leader Ramchandra Poudel participated in the meeting that lasted for half an hour at a hotel

Before holding the meeting with Deuba, Wang held a separate meeting with the ruling Nepal Communist Party Chairperson Pushpa Kamal Dahal and discussed the prospective visit of Chinese President Xi to Nepal.

It is learnt that President Bidya Devi Bhandari and Prime Minister KP Oli both briefed Minister Wang during their separate meetings on Monday that the government has made necessary preparations to welcome Chinese President Xi to Nepal.

Wang’s meetings with the ruling and opposition parties were aimed at gauging political consensus for Xi's possible visit, according to diplomatic sources privy to the development.

While his delegation-level meeting with counterpart Pradeep Kumar Gyawali was focused on reviewing all important aspects of bilateral relations.

The two foreign ministers expressed satisfaction over the expanding and deepening relations between Nepal and China in recent years and agreed to further promote co-operation in various areas of mutual interest.

On his part, Gyawali appreciated China’s continued support for Nepal’s socio-economic development and underlined the need of strengthening cooperation in the fields of connectivity, infrastructure, energy and education under the framework of China-proposed Belt and Road Initiative.

With the view to deepen cross-border connectivity, the two sides agreed to carry out the feasibility of the much-talked-about Nepal-China railway, according to officials who attended the meeting.

Wang, who is also the State Councilor of China, assured of Chinese support to Nepal’s development endeavors. The two sides exchanged substantive views on promoting bilateral economic cooperation with special focus on trade, investment, and tourism, according to the ministry.

After the meeting between Gyawali and Wang, the two sides also witnessed signing of the Exchange of Letters on the Hospital Recovery Project in Manang and the Exchange of Letters on 5000 pieces of emergency shelter tents and the exchange of Memorandum of Understanding between the Ministry of Education, Science and Technology, Government of Nepal and the Embassy of the People’s Republic of China on Volunteer Chinese Teachers’ Program in Nepal.

Wang was the first senior Chinese authority to visit Nepal after the formation of the Oli-led government in February 2018.

Wrapping up a three-day official visit to Nepal, the Wang-led 15-member Chinese delegation returned to Beijing on Tuesday afternoon.