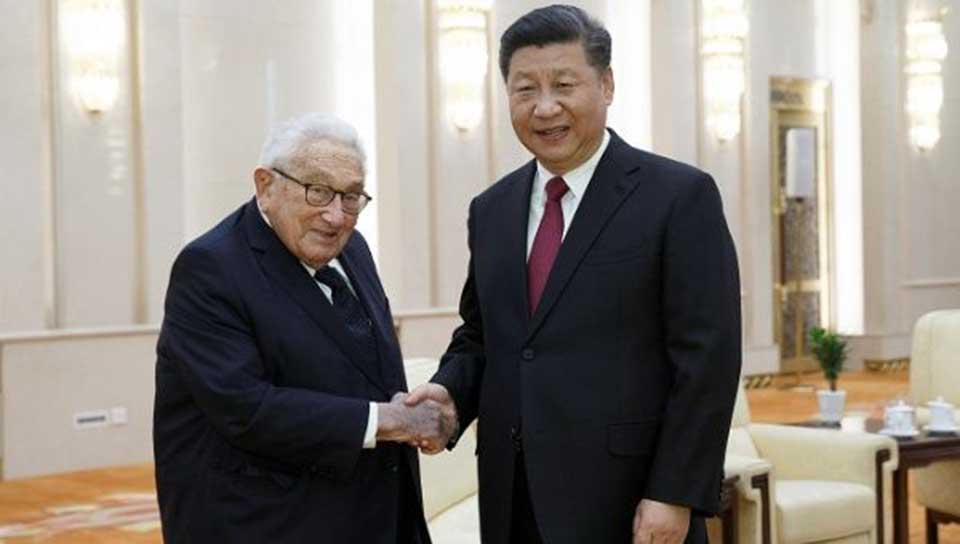 Chinese President Xi Jinping and Henry Kissinger at the Great Hall of the People in Beijing. | Photo: Reuters

During a joint press conference after the meeting, Xi hailed Kissinger for his "historic contribution" to China-U.S. relations. "We will not forget that," Xi told Kissinger.

During the Bloomberg New Economy Forum in Singapore, Kissinger warned: "if the world order becomes defined by a continuous conflict between the U.S. and China, sooner or later it risks getting out of control."

Diplomatic relations between China and the U.S. have been strained by President Donald Trump's imposition of tariffs.

Tariffs on US$200 billion worth of Chinese goods have been in effect since Sept. 24 and are expected to go up 10 to 25 percent by the end of 2018. The U.S. tariffs have unleashed what many are calling a trade war between the world's biggest economies.

Xi announced that he "agreed with President Trump to meet in the upcoming G20 summit in Argentina, where the two sides can have in-depth exchange of views on issues of common concern." Kissinger was reportedly optimistic that the two countries could "avoid catastrophe."

Diplomatic tensions are also a result of U.S. attempts to undermine China's economic and political standing in Latin America. In October, U.S. Secretary of State Mike Pompeo warned in Panama: “in some parts of the world, China has invested and left the countries in a worse situation and this should never happen.”

However, Xi reiterated "China sticks to the road of peaceful development, and is still committed to the building of a relationship with the United States that features no conflicts, no confrontation, mutual respect, and win-win cooperation."

From 1969 to 1977,  Kissinger was a dominant force in U.S. foreign policy serving served as National Security Advisor and Secretary of State under Presidents Richard Nixon and Gerald Ford.

In that time, he made a routine of cracking down on Socialist governments and national liberation movements in Asia and Latin America.

During the Vietnam War, Kissinger was jointly responsible for a massive bombing campaign in Cambodia, Operation Menu, which attempted to target National Liberation Front forces (commonly known in the U.S. as the Viet Cong) using the Ho Chi Ming Trail, deepening the chaos and suffering in the Cambodian Civil War.

He was also instrumental in the bloody Operation Condor, a joint military intelligence operation to persecute, detain, torture and kill left-wing activists and political leaders in South America.

However, with the Communist Party of China, Kissinger worked to end 23 years of diplomatic isolation in order to form an anti-Soviet, strategic alliance in the 1970s. This paved the way for future relations between the U.S. and China, which are now under duress.

KATHMANDU, Oct 12: Since the establishment of Sino-Nepal diplomatic relations on August 1 1955, traditional friendship and friendly cooperation between... Read More...

People above 50 years to get COVID-19 vaccines for four more days in KMC
21 hours ago
More than half of bottled drinking water is unfit for consumption: Govt report
5 hours ago