China Warns US: No Trade Deal if Tariffs Go Ahead 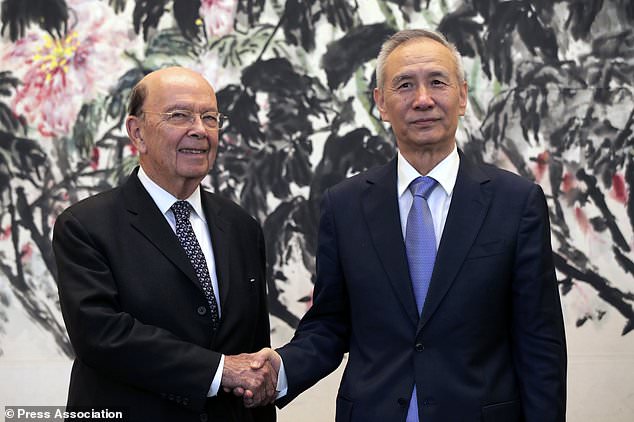 BEIJING, June 3: China has warned that any agreements with Washington in their talks on settling a sprawling trade dispute “will not take effect” if threatened U.S. sanctions including tariff hikes go ahead.

The statement Sunday came shortly after delegations led by U.S. Commerce Secretary Wilbur Ross and China’s top economic official, Vice Premier Liu He, held another round of talks on China’s pledge to narrow its trade surplus with the United States by purchasing more American goods.

The Chinese statement said the two sides made “positive and concrete progress,” but neither side released details.

The statement said, “If the United States introduces trade sanctions including increasing tariffs, all the economic and trade achievements negotiated by the two parties will not take effect.”

Ross said U.S. and Chinese officials have discussed specific American export items Beijing might buy as part of its pledge to narrow its trade surplus with the United States.

The two sides began a new round of talks in Beijing this weekend aimed at settling a simmering trade dispute.

Ross gave no details at the start of his meeting Sunday with Liu, China’s top economic official. But Chinese envoys promised after the last high-level meeting in Washington in mid-May to buy more American farm goods and energy products.

President Donald Trump is pressing Beijing to narrow its politically volatile surplus in trade in goods with the United States, which reached a record $375.2 billion last year. He’s threatening to hike duties on up to $150 billion of Chinese imports.

“Our meetings so far have been friendly and frank, and covered some useful topics about specific export items,” Ross said.

There was no indication whether the talks also would take up American complaints that Beijing steals or pressures foreign companies regarding their technology. The White House renewed a threat this week to hike duties on $50 billion of Chinese technology-related goods over that dispute.

Private sector analysts say that while Beijing is willing to compromise on its trade surplus, it will resist changes that might threaten plans to transform China into a global technology competitor.

Ross had a working dinner Saturday evening with Liu, also at the same guesthouse in Beijing.

China has promised to “significantly increase” purchases of farm goods, energy and other products and services. Still, Beijing resisted pressure to commit to a specific target of narrowing its annual surplus with the United States by $200 billion.

WASHINGTON/BEIJING, July 11: The Trump administration raised the stakes in its trade dispute with China on Tuesday, saying it would... Read More...

Doctor dies of COVID-19, first such case in Nepal
53 minutes ago