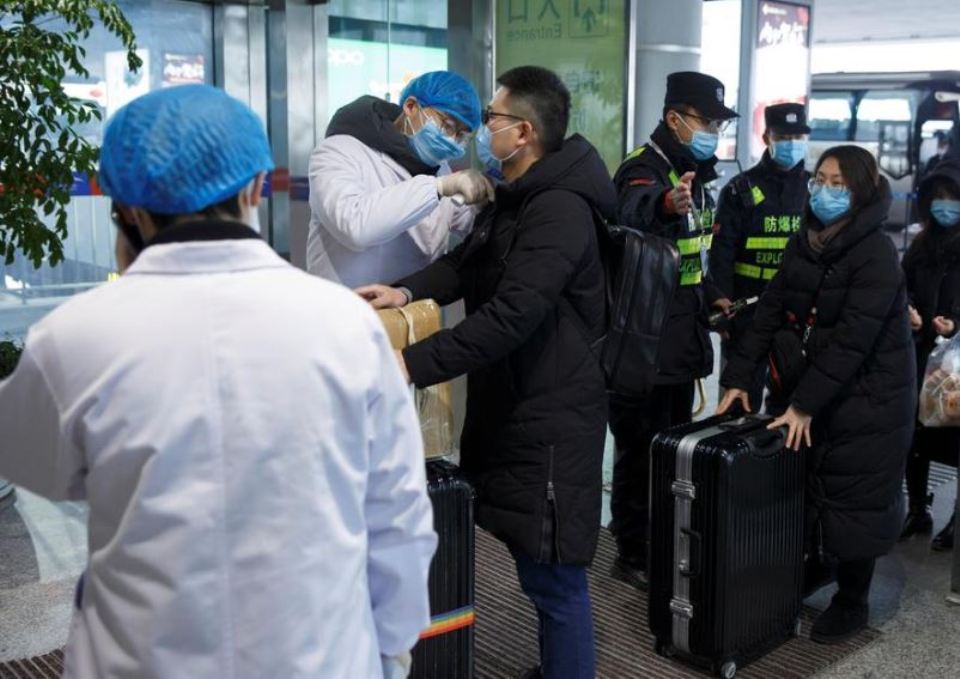 SHANGHAI, Jan 28: The United States warned against travel to China on Monday and Canada issued a more narrow travel warning as the death toll from the spreading coronavirus passed 100, with tens of millions stranded during the biggest holiday of the year and global markets rattled.

Global stocks fell, oil prices hit three-month lows, and China’s yuan dipped to its weakest level in 2020 as investors fretted about damage to the world’s second-biggest economy from travel bans and the Lunar New Year holiday, which China extended in a bid to keep people at home.

The health commission of China’s Hubei province said on Tuesday that 100 people had died from the virus as of Jan. 27, according to an online statement, up from the previous toll of 76, with the number of confirmed cases in the province rose to 2,714.

Other fatalities have been reported elsewhere in China, including the first in Beijing, bringing the deal toll to 106 so far, according to the People’s Daily. The state newspaper put the total number of confirmed cases in China at 4,193, though some experts suspect a much higher number.

On Monday, U.S. President Donald Trump offered China whatever help it needed, while the State Department said Americans should “reconsider” visiting all of China due to the virus.

Canada, which has two confirmed cases of the virus and is investigating 19 more potential cases, warned its citizens to avoid travel to China’s Hubei province, at the heart of the outbreak.

Authorities in Hubei province are taking increasing flak from the public over their initial response to the virus. Chinese Premier Li Keqiang visited the city of Wuhan, epicenter of the outbreak, to encourage medical workers and promise reinforcements.

Visiting Wuhan in blue protective suit and mask, Li praised medics, said 2,500 more workers would join them in the next two days, and visited the site of a new hospital to be built in days.

The most senior leader to visit Wuhan since the outbreak, Li was shown on state TV leading medical workers in chants of “Wuhan jiayou!” - an exhortation to keep their strength up.

China’s ambassador to the United Nations, following a meeting with UN Secretary-General António Guterres on Monday, said “the Chinese government attaches paramount importance to prevention and control of the epidemic, and President Xi Jinping has given important instructions. ...

“China has been working with the international community in the spirit of openness, transparency and scientific coordination,” he said.

Guterres said in a statement, “The UN appreciates China’s effort, has full confidence in China’s ability of controlling the outbreak, and stands ready to provide any support and assistance.”

On China’s heavily censored social media, officials have faced mounting anger over the virus, which is thought to have originated from a market where wildlife was sold illegally.

Some criticized the governor of Hubei province, of which Wuhan is the capital, after he corrected himself twice during a news conference over the number of face masks being produced.

“If he can mess up the data multiple times, no wonder the disease has spread so severely,” said one user of the Weibo social media platform.

In rare public self-criticism, Wuhan Mayor Zhou Xianwang said the city’s management of the crisis was “not good enough” and indicated he was willing to resign.

The central Chinese city of 11 million people is in virtual lockdown and much of Hubei, home to nearly 60 million people, is under travel curbs.

Elsewhere in China, people from the region faced questioning about their movements. “Hubei people are getting discriminated against,” a Wuhan resident complained on Weibo.

Cases linked to people who traveled from Wuhan have been confirmed in a dozen countries, from Japan to the United States, where authorities said they had 110 people under investigation in 26 states. Sri Lanka was the latest to confirm a case.

Investors are worried about the impact. The consensus is that in the short term, economic output will be hit as authorities limit travel and extend the week-long New Year holiday - when millions traditionally travel by rail, road and plane - by three days to limit spread of the virus.

“China is the biggest driver of global growth so this couldn’t have started in a worse place,” said Alec Young, FTSE Russell’s managing director of global markets research.

Chinese-ruled Hong Kong, which has had eight cases, banned entry to people who had visited Hubei recently.

Some European tour operators canceled trips to China, while governments around the world worked on repatriating nationals.

Officially known as 2019-nCoV, the newly identified coronavirus can cause pneumonia, but it is still too early to know just how dangerous it is and how easily it spreads.

“What we know about this virus it that transmission occurs through human contact but we are speaking of close contact, i.e. less than a meter,” said Jerome Salomon, a senior official with France’s health ministry.

KATHMANDU, Jan 28: Nepali students in Wuhan —the epicenter of the coronavirus epidemic in China— say they are very concerned... Read More...

BEIJING, Jan 29: The death toll from a new coronavirus in China rose sharply to 132 on Wednesday with nearly... Read More...

Suspension on int'l flights extended till April 30
6 minutes ago