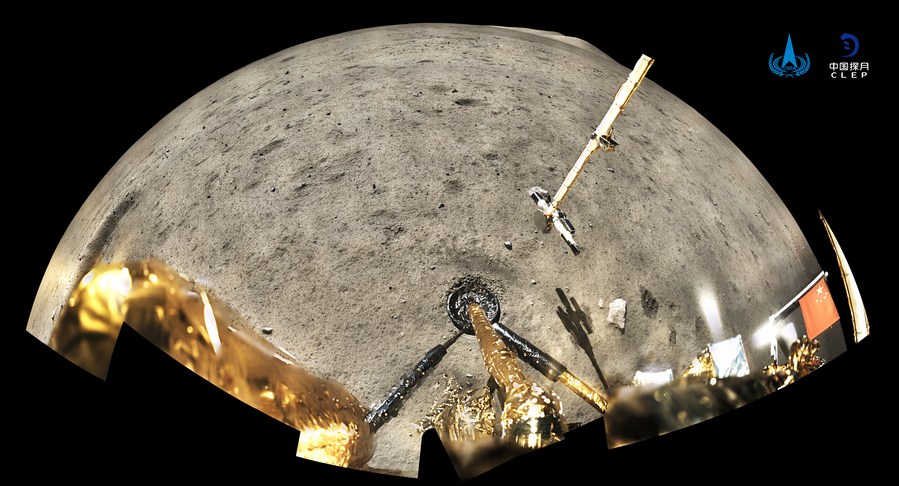 Photo provided by the China National Space Administration (CNSA) shows the view from the Chang'e-5 probe on the moon on Dec. 4, 2020. Photo courtesy: Xinhua

KATHMANDU, Dec 4: China has released images showing China's national flag unfurled from the Chang'e-5 probe on the moon, on Friday.

The images were taken by a panoramic camera installed on the lander-ascender combination of the probe, before the ascender blasted off from the moon with lunar samples late Thursday.

In one of the images, a robotic arm to collect lunar samples can be seen next to the flag.

China's Chang'e-5 probe was launched on Nov. 24, and its lander-ascender combination touched down on the north of the Mons Rumker in Oceanus Procellarum, also known as the Ocean of Storms, on the near side of the moon on Dec. 1.

After the samples were collected and sealed, the ascender of Chang'e-5 took off from the lunar surface late Thursday, and is expected to carry out unmanned rendezvous and docking with the orbiter-returner in lunar orbit, an unprecedented feat.

Chang'e-5 is one of the most complicated and challenging missions in Chinese aerospace history, as well as the world's first moon-sample mission in more than 40 years, Xinhua said in its report.

China prepares for return of lunar probe with moon samples

BEIJING, Dec 16: Chinese ground crews are standing by for the return of a lunar probe bringing back the first... Read More...

We’ve brought in wave of development in the country: PM Oli
41 minutes ago