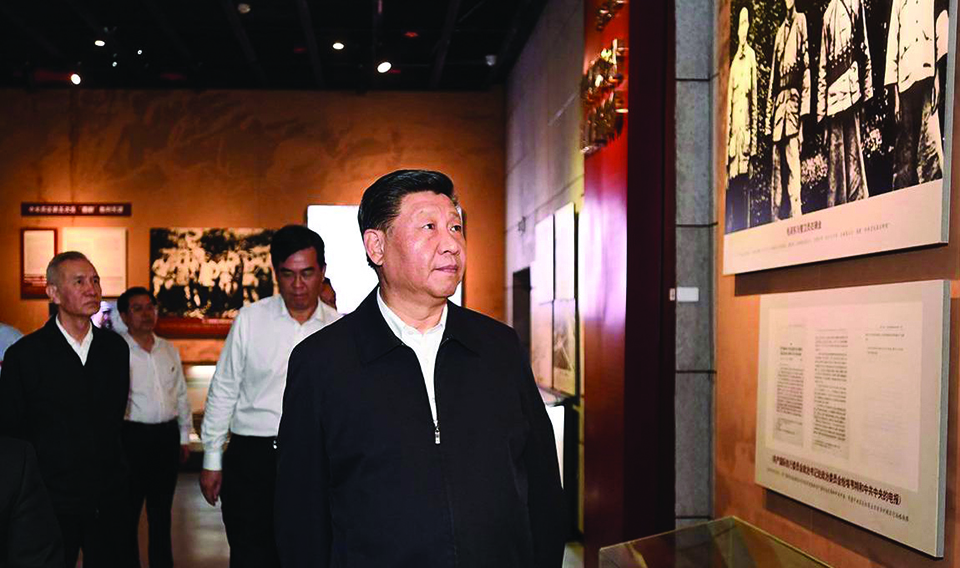 In keeping with Xi’s Long March imagery, China’s leadership is preparing for an enduring Cold-War-like confrontation, irrespective of who wins the 2020 election in the US

NEW HAVEN – A couple of months ago, while touring Jiangxi Province, Chinese President Xi Jinping made reference to an old revolutionary milestone. “Now there is a new Long March, and we should make a new start,” he said in response to the mounting economic conflict with the United States.

That strength was on display during my latest visit to China in early July. In a series of wide-ranging meetings and discussions, three conclusions stood out. Each challenges America’s bipartisan demonization of China.

First, slowing growth is not the source of fear for China’s leaders that many Western policymakers seem to think it is. Yes, from a historical perspective, the latest GDP report was weak: quarterly growth was the slowest since the current statistical reporting system was adopted in 1992, and even worse than that recorded a decade ago, in the depths of the global financial crisis. But the 6.2 percent rate for the second quarter of 2019 was a relatively mild deceleration of 0.5 percentage point from the relatively subdued 6.7 percent average pace of the previous eight quarters. By contrast, the slowing to 6.6 percent in the first quarter of 2009 was a far more abrupt deceleration of 5.5 percentage points from the average gain of 12.1 percent over the preceding eight quarters. A modest slowing is not a growth collapse by any stretch of the imagination.

That should not be surprising. China has more policy levers than growth headwinds. With ample room for further monetary easing, infrastructure spending, and other forms of fiscal stimulus, Chinese authorities are far less concerned about a sudden growth accident than the US narrative would lead one to believe.

Moreover, Washington’s fixation on who is winning the trade war overlooks a critically important structural shift in the Chinese economy. In 2018, net exports were just 0.8 percent of China’s GDP, which represents a dramatic compression from a decade earlier, when net exports accounted for fully 7.5 percent of real GDP. While hardly an oasis in a weakening global economy, China is far less exposed to a trade shock today than it was back then. Even if it loses a trade war—a debatable proposition—damage to China’s overall economic growth would be minimal.

At the same time, the May 24 Baoshang Bank failure—a first for China in about 20 years—has triggered a worrisome outbreak of counterparty risk contagion. With bad debts ballooning in excess of 30 percent, this privately-owned Inner Mongolian midsize institution was apparently victimized by corrupt management. A well-coordinated takeover by China’s financial regulators and the central bank appears to have contained the direct damage while sending an important moral hazard signal to undisciplined lenders. But the interbank borrowing market is still shaky, with spillovers to smaller banks, including those in rural areas. Ironically, China may be better able to manage trade risks than instability in its financial system.

The second conclusion that stood out from my recent discussions is that China is patient and methodical in dealing with external wildcards—especially US politics. Chinese officials are not about to bet on the 2020 US presidential election in formulating their strategic response to the trade conflict. Obviously, there is great interest in the outcome; but in keeping with Xi’s Long March imagery, China’s leadership is preparing for an enduring Cold-War-like confrontation, irrespective of who wins the election.

Significantly, many senior Chinese officials don’t share the US consensus view that America’s post-2020 China policy trajectory will stay its current course—Donald Trump or not. In the event that Trump loses, the Chinese suspect that US foreign policy will shift back to a more multilateral, alliance-focused approach. Their biggest hope is for a restoration of integrity to the policymaking process itself.

Like many in the US, the Chinese find it difficult to deal with unpredictable, almost whimsical, shifts in tariffs and sanctions. Even if a new president were to remain tough on China, a coherent and well-articulated US strategy would be far more effective in framing the debate and offering hope for constructive resolution of grievances.

Third, Huawei is a big deal for China. The tech giant is perceived to be a national champion and emblematic of China’s push toward indigenous innovation, which is central to its longer-term growth and development aspirations. By taking advantage of its “choke point” position in the Huawei supply chain, the Trump administration’s China containment campaign is seen as seeking to stifle those aspirations.

There is no question that Huawei is feeling the heat as the US squeezes the supply-chain by putting pressure on America’s leading suppliers of semiconductor chips, other components, and software—companies such as AMD, IBM, Marvell, Intel, Google, and Microsoft. According to Huawei’s management, the company’s earnings this year and next will be about $30 billion below projections.

While senior US officials have sent mixed signals about relaxing restrictions on Huawei, the weaponization of US trade policy has sent a clear message to China: the need to address the supply-chain vulnerability of its leading-edge technology companies is now a top policy priority.

The conventional wisdom in the West is that China will need ten years to build a domestic chip and software industry that could fill the void created by US restrictions. The Chinese I spoke with in early July felt that the gap could be closed much sooner, possibly within two years. If anything, Trump’s threats against Huawei have served as a wake-up call to Xi’s “self-reliance” campaign. The US chokehold could be surprisingly short-lived.

Time and again, the long view in China has stood in sharp contrast to America’s short-term approach. Needless to say, this has become all the more evident during the past two and a half years of Trump’s Twitter-driven policy gambits. One senior Chinese policymaker actually admitted to checking Trump’s Twitter feed each morning. No surprise there. Sun Tzu put it best in his ancient treatise, The Art of War: “If you know the enemy and know yourself, you need not fear the results of a hundred battles.”

Stephen S. Roach, a faculty member at Yale University and former Chairman of Morgan Stanley Asia, is the author of Unbalanced: The Codependency of America and China.