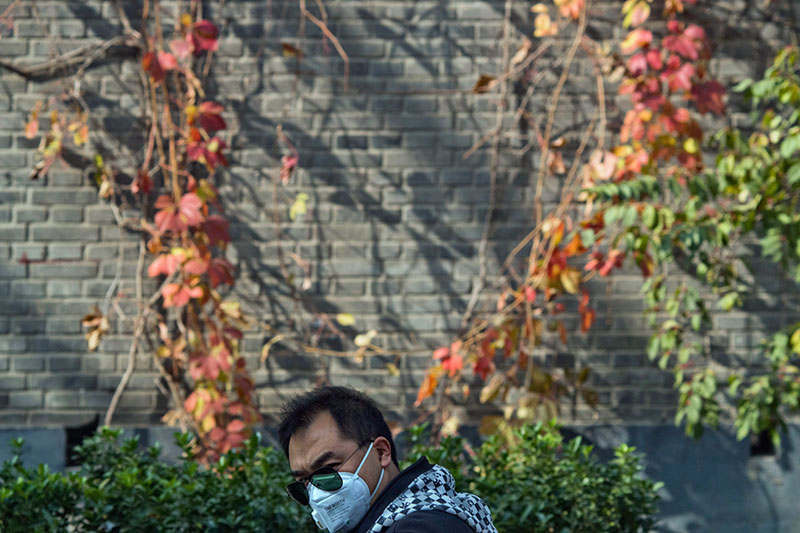 A man wears a mask during a heavily polluted day in Beijing, China, Saturday, Nov. 5, 2016. China's cabinet has issued a new climate plan targeting an 18-percent cut in carbon emissions by 2020 compared to 2015 levels. (AP)

Under the new State Council plan announced Friday, coal consumption must be capped at about 4.2 billion tons in 2020 while non-fossil fuel energy generation capacity like hydropower and nuclear power are expanded to 15 percent share of China's total capacity.

China has taken a leading role in climate change talks and its collaboration with the United States has been touted by Washington and Beijing as a bright spot in an otherwise strained relationship.

China will guarantee that emissions peak no later than 2030 under the Paris pact. There are also plans to officially launch a national carbon trading market next year.

In recent years, China has become a world leader in renewable energy investment and installation of new wind and solar power capacity, but efforts by the central government to break away from coal consumption have been frustrating at times.

Even after Beijing declared a "war on pollution," hundreds of new coal power plants were approved for construction in 2015 by local governments keen to buoy their economies.

Central economic planners earlier this year declared a halt on new approvals for coal plants. Energy officials went a step further last month when they declared a construction freeze on scores of partially-built plants across more than a dozen provinces, garnering praise from environmental groups like Greenpeace.

BEIJING March 4: China says its defense budget will rise by about 7 percent in 2017, continuing a trend of... Read More...