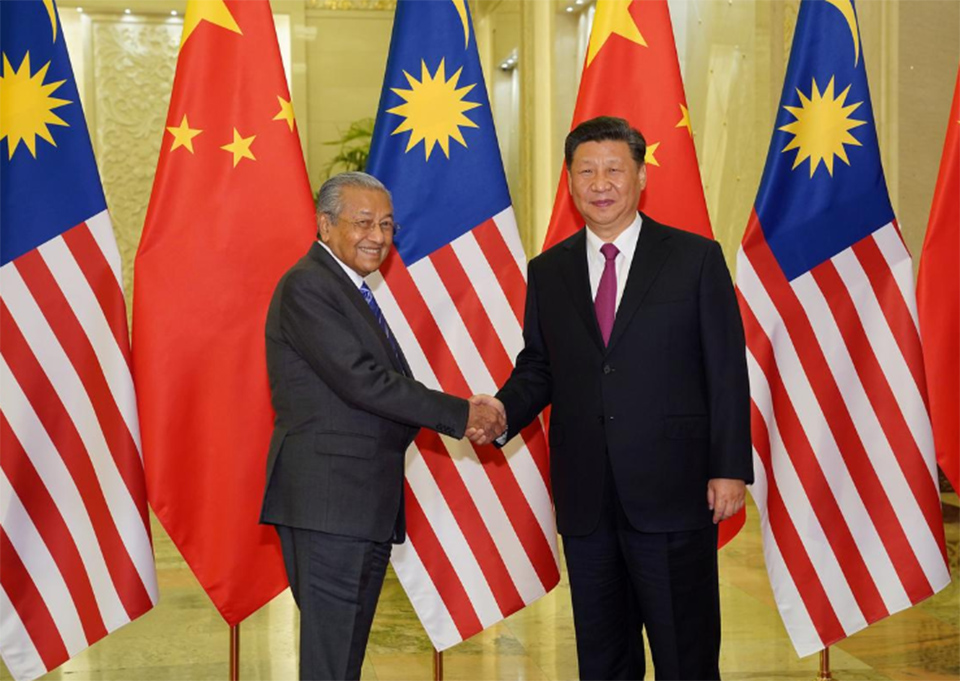 Chinese President Xi Jinping shakes hands with Malaysian Prime Minister Mahathir Mohamad before the bilateral meeting of the Second Belt and Road Forum at the Great Hall of the People in Beijing, China, April 25, 2019. Andrea Verdelli/Pool via REUTERS/File Photo

DUNGUN, July 25: China and Malaysia resumed construction on a massive “Belt and Road” train project in northern Malaysia on Thursday, after a year-long suspension and following a rare agreement to cut its cost by nearly a third to about $11 billion.

The project was initially canceled by Malaysian Prime Minister Mahathir Mohamad, who came to power after a shock election victory in May last year, as he followed through a pledge to renegotiate or cancel “unfair” Chinese mega-projects approved by his predecessor, Najib Razak.

But in April, the close trade partners agreed to proceed with the East Coast Rail Link (ECRL) at a cost of 44 billion ringgit ($10.7 billion), reducing it from 65.5 billion ringgit.

The 640 km line (398 miles), with China Communications Construction Co Ltd (601800.SS) as the lead contractor, will connect Port Klang on the Straits of Malacca with the city of Kota Bharu in northeast peninsular Malaysia.

The agreement to resume work on the project had immediately boosted confidence in Malaysia among foreign investors, China’s ambassador to Malaysia said at a ceremony in the coastal district of Dungun.

Flanked by cranes and trucks parked near a partly completed section of a tunnel, Ambassador Bai Tian spoke of “a great wave” of potential Chinese investors coming to Malaysia for field studies, and he expected many of them to decide to invest.

China is debt-heavy Malaysia’s biggest trade partner and the countries have close cultural ties too.

Ambassador Bai said the completion of the ECRL, expected by December 2026, could more than double the number of Chinese tourists coming in to Malaysia from 3 million last year.

Malaysia Rail Link, the project’s local partner, said in a statement that up to 70% of the workers will be local and that domestic contractors will get 40% of the civil works.

The Belt and Road Initiative (BRI) has been praised for its potential to speed up economic development in many developing countries but criticized for potentially saddling many of them with unsustainable debt.

Malaysia’s Finance Minister Lim Guan Eng told Reuters on Monday that Beijing had offered them more BRI infrastructure investments and that Kuala Lumpur would consider them “if the pricing is right”.