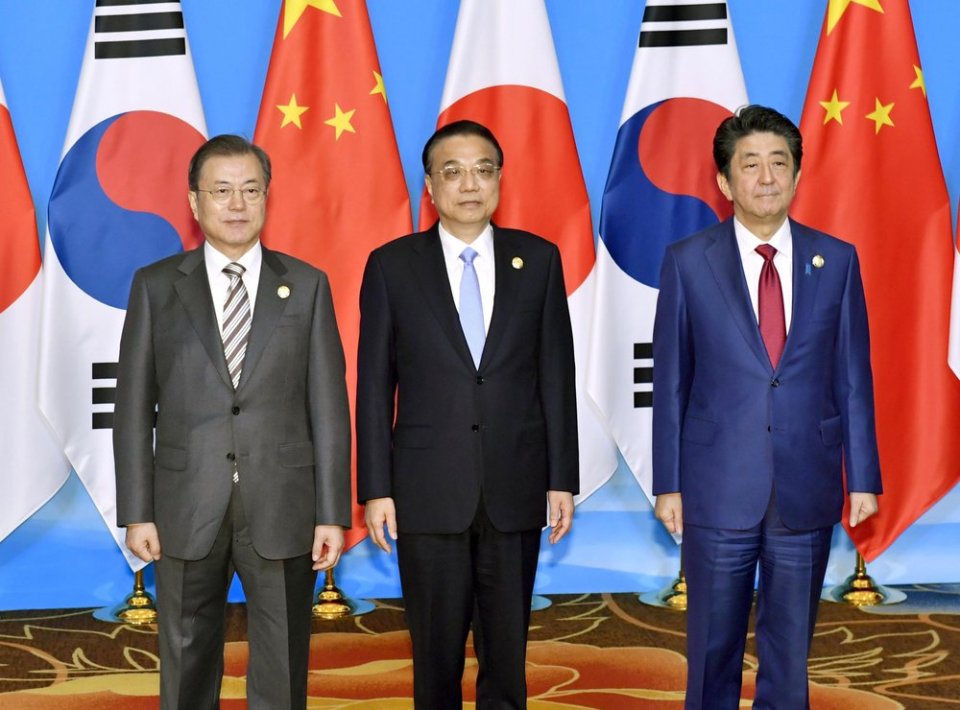 CHENGDU, China, Dec 24:  Leaders from China, Japan and South Korea reiterated their commitment to ending North Korea’s nuclear and missile programs at a trilateral summit Tuesday that comes against the backdrop of increasing demands by Pyongyang for sanctions relief.

Free trade and economic cooperation were also at the forefront of the meetings between Chinese Premier Li Keqiang, Japanese Prime Minister Shinzo Abe and South Korean President Moon Jae-in in the southwestern Chinese city of Chengdu.

Li said the three agreed that “dialogue and consultation is the only effective way to solve the issues of Korea Peninsula.”

“We three countries are willing to work together with the international community to solve the issue of Korea Peninsula in a political way,” Li said at a joint news conference following the meeting.

The North has threatened to take unspecified action if sanctions relief is not forthcoming by the end of the year. Speculation has centered on the possibility of conducting a new missile test, possibly of an intercontinental ballistic missile capable of delivering a nuclear warhead.

The North has said that what “Christmas gift” it gives the United States depends on Washington’s actions.

Li, Abe and Moon also said they discussed furthering regional cooperation on the economy, the environment and people-to-people exchanges.

“We all advocate for free trade and promote economic integration. China holds that safeguarding free trade benefits the protection of multilateralism, of world peace,” Li said.

Moon said the sides agreed to support efforts to restart talks between Washington and Pyongyang so that “denuclearization and peace ... could actually advance.”

“For that purpose, it was confirmed that full implementation of U.N. Security Council resolutions remains important, and we need to maintain the momentum of the U.S.-North Korea process,” Abe said.

Although China is North Korea’s most important source of investment, diplomatic support and economic aid, it has shown little success in convincing Kim Jong Un’s government to abandon its nuclear arsenal. The U.S. has demanded steps toward complete denuclearization before any sanctions can be lifted, while Beijing favors a multi-stage approach.

The trilateral summits between China, Japan and South Korea date back to the fallout from the 1997 Asian financial crisis, which devastated businesses across the region and prompted moves toward greater economic integration. The three countries account for about 24% of world trade and have tightly bound supply chains, with more than $720 billion in trade moving between them last year.

With the Trump administration’s abandonment of the Trans-Pacific Partnership, China has led a push for an alternative 16-nation grouping, the Regional Comprehensive Economic Partnership. Momentum toward a final agreement hit a snag this year when Chinese rival India said it would not participate, and the future of the pact remains unclear.

There is friction among the three nations that met Tuesday as well.

While Japan and China have lately set aside their historical differences, South Korea and Japan continue to feud over Japan’s colonization of the Korean Peninsula in the last century, a dispute now spilling over into their vital economic relationship.

Moon and Abe later met for a one-on-one summit, where the South Korean president described the two countries as “closest neighbors, historically and culturally” and expressed hope that they could sort out their differences through dialogue.

But the meeting ended without a breakthrough, with the leaders failing to narrow their differences over South Korean court rulings that called for Japanese companies to compensate aging South Korean plaintiffs for their World War II forced labor, which has been a major sticking point between the countries.

Moon’s office said he repeated Seoul’s demands that Tokyo reverse its moves to downgrade South Korea’s status as a trade partner and tighten controls on shipments of Japanese chemicals that are used by major South Korean companies to produce computer chips and smartphones, which are key export items for the country. Abe, in response, said that the countries should sort out the problems through talks between trade officials, South Korea’s presidential Blue House said.

Li, who is chiefly responsible for overseeing China’s economy, acknowledged the frictions between Japan and South Korea, but said that would not alter China’s commitment to free trade and open markets. Although China has been accused of “weaponizing” trade in political disputes and unfairly backing its major state companies, it has been a leading voice against protectionism amid its ongoing tariff war with Washington.

“The three countries over the past 20 years have cooperated in various fields, including business, diplomacy, culture, people-to-people exchanges and the environment,” Moon said. “We now form a core cooperative body in Northeast Asia that contributes to international peace and prosperity.”

Crane population on decline with shrinking wetland
48 minutes ago