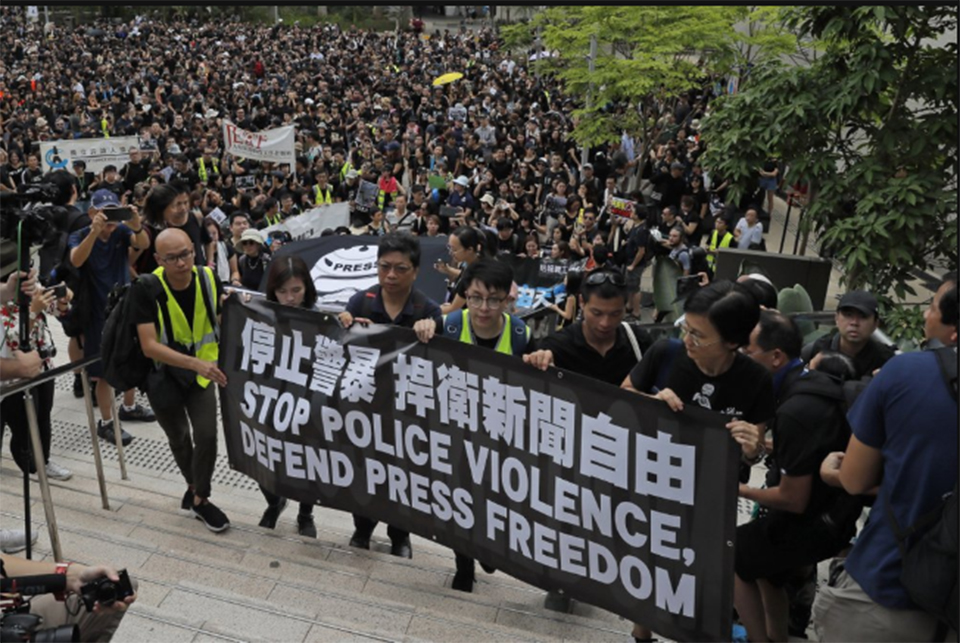 BEIJING, July 29: China blamed Western forces and defended police conduct in remarks Monday about Hong Kong after the city endured another weekend of violent clashes between protesters and police.

Yang Guang, the spokesman for the Chinese Cabinet’s Hong Kong and Macao Affairs Office, said at a news briefing that some “irresponsible people” in the West have applied “strange logic” that prompted them to be sympathetic and tolerant to “violent crimes” while criticizing the police force’s “due diligence.”

“At the end of the day, their intention is to create trouble in Hong Kong, make Hong Kong a problem to China, in order to contain China’s development,” Yang said, without mentioning any specific individuals or countries.

He added that such attempts will come to nothing because Beijing will tolerate no outside interference in the affairs of the semi-autonomous Chinese territory.

The protests in Hong Kong began in early June as a call to withdraw an extradition bill that would have allowed people in the former British colony to be sent to stand trial in mainland China, where critics say their legal rights would be threatened. Since the government indefinitely suspended the legislation, demonstrators have broadened their scope to demand greater democracy and government accountability.

The protesters have demanded an independent inquiry into police conduct at the protests, which they say has been abusive.

At least one woman was knocked down when police used rods Saturday to disperse crowds in Hong Kong’s Yuen Long area, where officers later charged into a train station swinging batons. Protesters were “holding iron poles, self-made shields and even removing fences from roads,” police said in a statement that accused demonstrators of putting officers’ lives in danger by surrounding an occupied police vehicle.

Hong Kong’s government and police force have said the protests have placed considerable strain on their officers, who are dispatched in large numbers for the protests, which occur at least once a week and generally go late into the night despite repeated appeals to disband. Hong Kong authorities said these pressures made it difficult for police to act immediately when a band of white-clad assailants beat people inside the Yuen Long train station on July 21.

Protesters said the slow police response to that attack indicated that officers were colluding with the attackers — an allegation that authorities have refuted. Last Monday, police arrested six men in connection with the attack, including some linked to triad gangs.

Coalition govt has destroyed the foundation of democracy: Oli
22 hours ago

Number of people joining the Maoist Center has increased: Dahal
3 hours ago
Eighth Tanahun festival to begin from January 22
4 hours ago