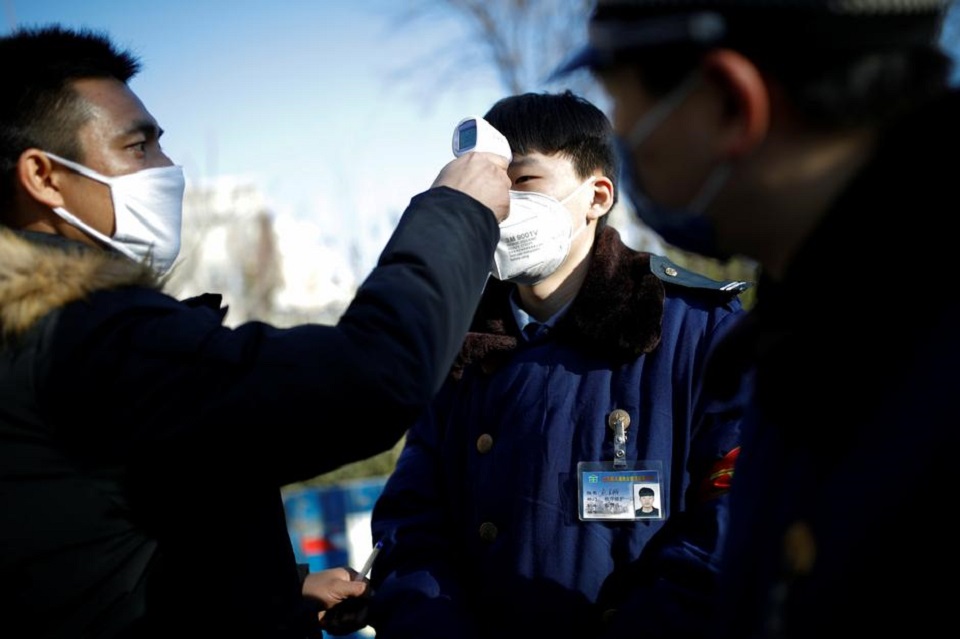 A staff member uses a thermometer to check the temperature of a colleague at an entrance of a residential complex, as the country is hit by an outbreak of the new coronavirus, in Beijing, China February 1, 2020. REUTERS/Carlos Garcia Rawlins

SHANGHAI, Feb 1: The number of deaths from a coronavirus epidemic in China has risen to 259, the country’s health authority said on Saturday, as the United States announced new border curbs on foreign nationals who have been in China.

The province of Hubei, the centre of the epidemic, remains under virtual quarantine, with roads sealed off and public transport shut down, but small numbers of travellers continue to breach the lockdown.

Amid fears that the virus could spread further overseas, the United States announced measures to restrict entry to foreign nationals who have recently been in China. All three major U.S. airlines also said on Friday they would cancel flights to mainland China.

“We would want countries to focus on the mitigation efforts of identifying the possible importation of cases and responding to any domestic outbreak,” Galea told Reuters on Saturday.

Around two dozen countries have reported confirmed cases of the virus, but the vast majority of those infected remain in China.

Qantas Airways Ltd (QAN.AX) and Air New Zealand (AIR.NZ) said the international travel bans had forced them to suspend their direct flights to China from Feb. 9.

Nearly 10,000 flights have been suspended since the outbreak of the coronavirus in China, according to travel and data analytics firm Cirium.

Many nations have put on special charter flights to repatriate citizens from China.

More than 300 South Koreans arrived home on Saturday on a second charter flight from China and have been transported to a facility where they will be isolated for two weeks, the health ministry said. Seven people on the flight exhibited symptoms and were sent immediately to hospital.

Cities across China have continued to implement special measures aimed at curbing the spread of the pathogen. Tianjin, a city in northern China with around 15 million people, said all schools and businesses would be suspended until further notice.

A senior leadership group tasked with handling the crisis promised to take action to prevent a big surge in the number of people travelling after the extended Lunar New Year holiday.

The team led by Premier Li Keqiang said they would coordinate with local governments to stagger the times when people are asked to go back to work.

The U.S.-based China Human Rights Defenders urged the Chinese government to ease restrictions on movement and counter discrimination against residents of Wuhan and Hubei, adding that censorship had contributed to the spread of the virus.

“Human rights must not be a casualty of the government’s work to contain the coronavirus outbreak that has killed nearly 200 people and affected millions,” the group said.

The WHO, which declared the outbreak a public health emergency of international concern on Thursday, has praised China’s response to the outbreak.

The United Nations has announced it has moved a key round of talks on a new biodiversity treaty originally scheduled to take place in Kunming in southwest China on Feb. 24. The talks will now take place in Rome.

Several high-profile sporting events have also been moved or postponed, the latest a badminton Olympic qualifier in Hainan province.

Walmart Inc (WMT.N), the world’s largest retailer, announced it was temporarily limiting “non-business critical travel” to China, while farm equipment maker Deere & Co (DE.N) temporarily closed its facilities in China, the latest of dozens of major companies restricting travel and operations due to the outbreak.

China’s National Health Commission said there were 2,102 new confirmed infections in China during Friday, bringing the cumulative total to 11,791.

The local health commission of Hubei province, the epicentre of the epidemic, earlier on Saturday reported 45 new deaths from the outbreak on Friday, bringing the total to 249. The other death on Friday was in the southwest city of Chongqing.

Hubei confirmed 1,347 new cases of infection on Friday, with the total reaching 7,153 by the end of the day.

Hubei’s provincial capital Wuhan, where the virus is thought to have originated, reported 576 new confirmed cases over the day, and also saw 33 deaths from the virus. A total of 192 people in Wuhan have now died.

CALIFORNIA, Nov 15: As the scope of a deadly Northern California wildfire set in, the sheriff said more than 450... Read More...