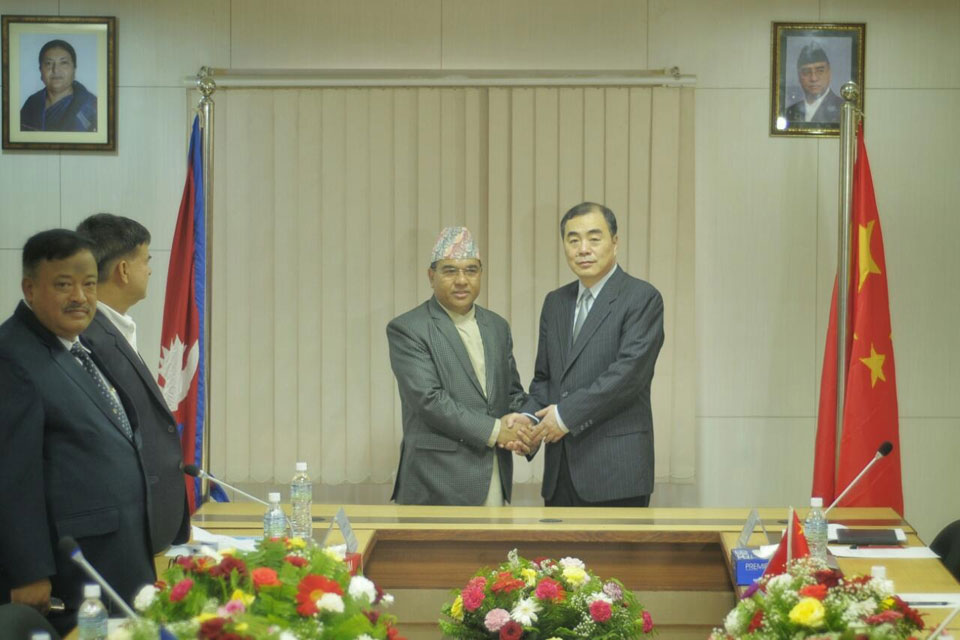 "Visiting Chinese delegation has assured to reopen the customs point once the reconstruction and rebuilding work in the area is completed."

KATHMANDU, June 21: China has agreed to reopen the Tatopani customs point that remains closed since April 2015 when the earthquakes heavily damaged infrastructures on both sides of Nepal-China border.

Officials participating in the 11th Nepal-China Joint Consultative Mechanism meeting held in Kathmandu on Tuesday said the Chinese side has assured Nepal that they are committed to resuming the operation of the Tatopani customs point once the reconstruction of the damaged buildings and road and protection works of the area are completed.

The Chinese delegation told the Nepali side that they are investing some Rs 2 billion for the protection and reconstruction works in the area.

Chinese assurance to resume the customs point comes in the wake of speculations in Kathmandu that China was in favor of permanently closing the customs point that was opened in 1960s. Only Rasuwagadhi customs point is operational between Nepal and China since the 2015 earthquakes.

Although the Chinese side has been expeditiously working to reconstruct the damaged infrastructures on its side of the border, not much work has been done yet on the Nepalese side, officials said. "He told that we are ready to put in place the infrastructures on our part. We are optimistic that the customs point would resume soon," said Foreign Secretary Shanker Das Bairagi, who leads the Nepalese delegation at the meeting.

During their visits to China, the then prime ministers K P Sharma Oli and Pushpa Kamal Dahal had asked the Chinese side to reopen the Tatopani-Zhangmu border point. Nepal has also been raising this issue in all other meetings with the Chinese side.

The Joint Consultative Mechanism was set up in 1996 as a platform for discussing the matters of mutual concerns and cooperation at the senior officials' level between the Foreign Ministries of Nepal and China. While Foreign Secretary Bairagi led a 21-member Nepali delegation, Assistant Minister of the Ministry of Foreign Affairs Kong Xuanyou led the 12-member Chinese delegation in the meeting.

The meeting dwelled on reviewing the status of Nepal-China relations and assessing the progress made in the implementation of agreements/MoUs reached between the two sides in the past. "The two sides expressed commitment to further promote cooperation in mutually agreed areas. Both sides also agreed to work in realization of economic opportunities available for mutual benefit,"said an MoFA statement issued after the meeting.

The meeting discussed ways to promote trade, investment, infrastructure development and people-to-people contact and maintaining the tradition of regular exchange of high-level visits between the two countries. Discussion on the ways to further enhance coordination and facilitation for the promotion of Nepal's tourism prospects in China in the context of the Chinese Government's announcement of the year 2017 as 'Nepal's Tourism Promotion Year in China' was also held.

During the meeting, the Chinese side had appreciated Nepal for deciding to be a part of the China's Belt and Road Initiative last month. "The Nepali side expressed hope that cross-border connectivity, infrastructure development, diversification of Nepal's trade, promotion of investment and tourism would receive priority in the implementation of the MoU on cooperation under the Belt and Road Initiative signed by the two sides on May 12, 2017,"said the MoFA statement.

The visiting Assistant Minister Kong is scheduled to pay courtesy calls on Prime Minister Sher Bahadur Deuba and Foreign Affairs Minister Krishna Bahadur Mahara on Wednesday. He is also scheduled to visit the reconstruction projects in Kathmandu being implemented under the Chinese grant assistance.

KATHMANDU, March 16: China has agreed to extend support to Nepal to bring back into operation the Tatopani border point, which... Read More...