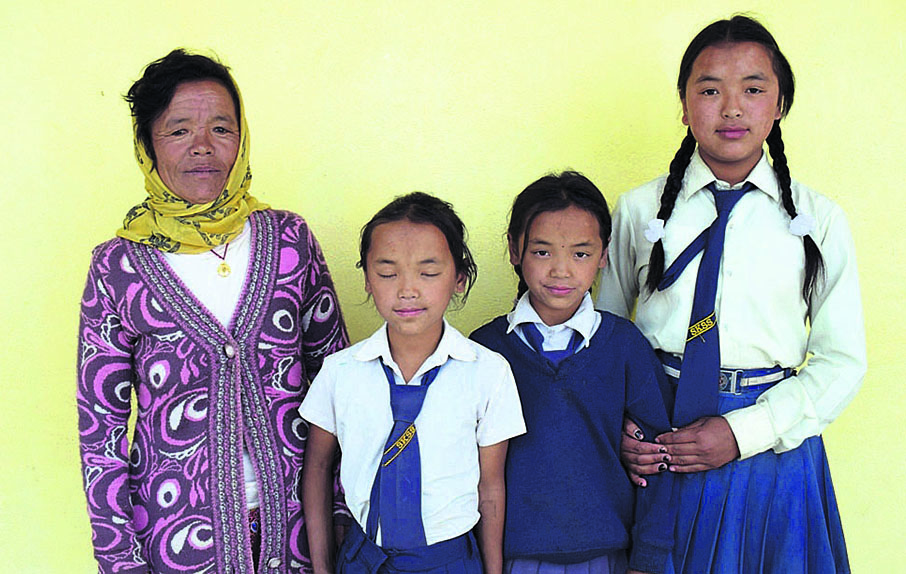 MYAGDI, May 21: After failing to provide two square meals to his children, Ambar Bahadur Ramjali of Annapurna Rural Municipality-1 committed suicide two years ago. He earned his living as a laborer. Extreme poverty compelled him to hang himself from a tree in a local community forest.

Since then, his five children have been living a miserable life. It has been a challenge for Ambar Bahadur’s wife Dalli to look after her five children, especially due to her poor health. The view of her husband hanging dead by the tree still haunts her and makes her weak. This family has been sleeping on empty stomach since years.

Their days worsened after the death of Ambar Bahadur. As Dalli is not physically capable of working, she has been currently sheltering in the house of her neighbors along with her children. Her children study in a community school of the village.

These children have been managing books and stationeries for them by working in the fields of others.
“We live in our neighbor’s house. We rarely get to eat good food,” said Kusum Ramjali, one the daughters. She laments that her family often sleeps on empty stomach as they feel ashamed to beg for food every day.

The eldest daughter Kumari started working at the fields of landlords as well as local hotels to feed her siblings after appearing for the Secondary Education Examination (SEE). She says she still can’t believe that her father committed suicide two years ago.

“It’s hard to see a young girl skipping her studies to feed her family,” says ward member Man Kumar Garbuja. According to Garbuja, Kumari was outstanding in her studies. The money earned by the elder sister has been utilized for the education of her sisters Kusum, a tenth grader, Kareena and Kajal both fourth graders, along with brother Kumar, who is an eighth grader at the local Kailash Secondary School.

Sher Bahadur Garbuja, principal of the school, stated that all the children have the ability of doing well if given better opportunities. He claimed that the school has been doing its bit to provide required help to the children. “They need help for further education,” said Principal Garbuja.

KATHMANDU, Jan 12: Amid growing concerns over the condition of Nepali children adopted abroad, the government has asked its diplomatic missions... Read More...

Woman dies after murdering her children

BHIMDUTTANAGAR, Aug 22: A woman has died after forcing her children to consume poison. ... Read More...