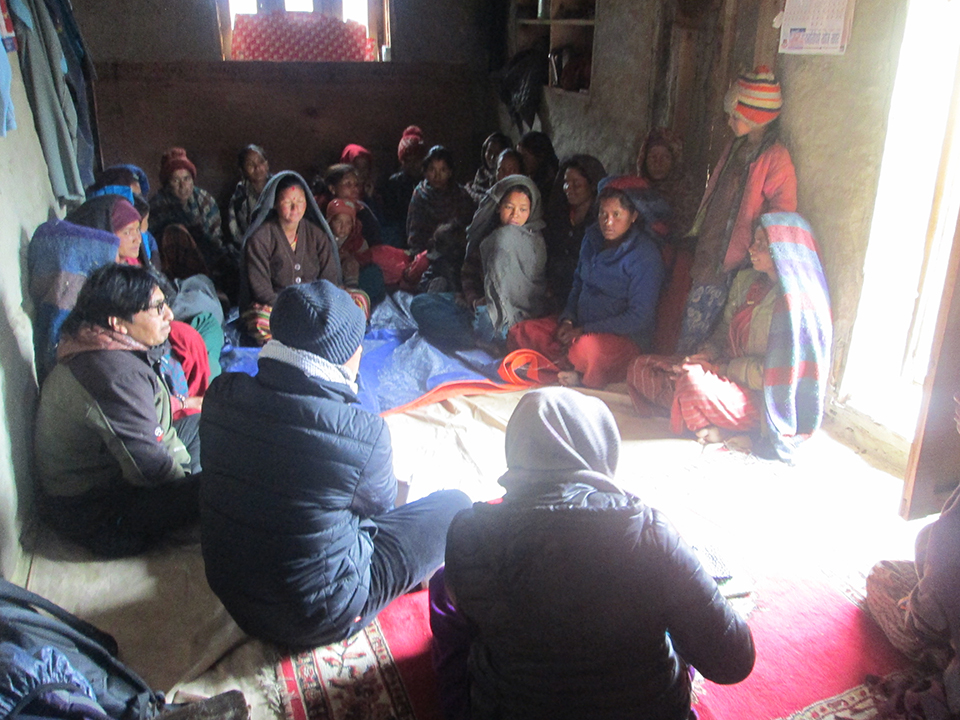 Representatives and officials of Guthichaur Rural Municipality discussing the disadvantages of child marriage.

JUMLA, Feb 24: Manita Nepali of Guthichaur Rural Municipality-4 got married at the tender age of 16. She delivered her first child when she was eighteen years old. "We had tied the nuptial knot by running away from home. There is no fault of our families in this," she said.

As youths in the rural parts are unaware that it is illegal to get married before 20 years, most of them get married while in school. Following in the footsteps of her friends, Manita, too got married early. But she says she, too, was unaware that she was breaching the law by getting married to her lover. "Only now, local units have been introducing new policies to discourage child marriage. This might put an end to this ill practice,"Similarly, now 19 years old, Bishnumaya Neupane had married her lover when she was 16. This mother of two is currently struggling with various health problems. Like many of her friends, she was unaware about the disadvantages of early marriage. Earlier, most villagers used to marry their daughters off after menstruation or sometimes even before that.

"The trend of teenagers finding their matches in schools and getting married to them has been increasing of late," said Bishnumaya. Keshavraj Sharma, chief administrative officer of Guthichaur, informed Republica that some women deliver their first child at 16 and manage to give birth to up to 13 children by the time they are 34 years old.

Health workers say early marriage and early motherhood harms the health of both child and mother. According to locals, easy access to mobile and internet has added to child marriage. As per the new civil code, a person becomes eligible for marriage only after reaching 20 years of age. If people choose to get married before reaching the eligible age, their marriage will be illegal.

"These days the number of youths practicing love marriage at young age has increased significantly," said CDO Sharma. Hari Bahadur Bhandari, Chairperson of Guthichaur says he will soon launch a campaign aimed at curbing child marriage. "Unlike in the past, teenagers don't run away from home but just go to temples and get married compelling their parents to accept them," said Bhandari, adding," We just want to convey the message that getting married at young age is not a right decision."

According to him, those getting married before the eligible age will be punished as per the law. Child marriage is equally prevalent in Patarasi, Tila, and Kankasundari rural municipalities as well. Though many social organizations claim to conduct various kinds of awareness programs in the district, there has been no fall in the number of child marriage.