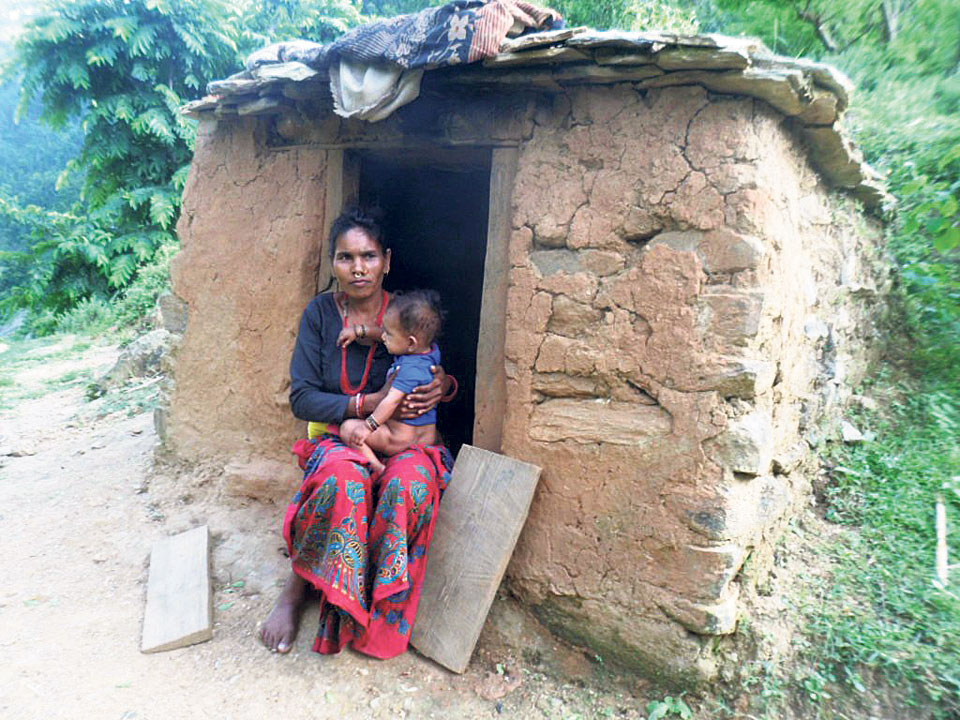 A woman with her child in lap sits in the entrance of a chhaugoth in a western village of Dailekh district in this file photo. Photo: Govinda KC/Republica

DAILEKH, July 8: On December 19 last year, a 15-year-old girl in Achham district was found dead in a Chhaugoth, a shed where girls and women are kept during their menstruation and post delivery. The deceased, Roshani Tiruwa's kin lamented her untimely death. However, few were apologetic for keeping her isolated during her fragile health condition. That was 'an unavoidable tradition' for them.

A month before that, on November 19, 21-year-old Dambara Upadhyaya also had succumbed to the same culture in the same district. Both Roshani and Dambara were reported to have died due to suffocation from fire smoke inside the tiny shed.

Chhaupadi death continues unabated in the western region. On May 22 this year, Lalsara BK, 20, died. The local of Chamundabindrasaini Municipality of Dailekh was suffering cold related ailments. However, she was still kept inside the Chhaugoth during her menstruation where cold gripped her even further. After her health deteriorated, she was taken to hospital but she died on the way.

On Thursday, Chhaupadi took toll on Shanta Shahi, 19, of the same municipality. That was her fourth day of menstruation and she was supposed to come out of the goth in the morning. However, she was bitten by snake during the night. Locals had immediately called for the shaman to treat her and though the locals said that the 'shaman did his best', her health deteriorated further. She died on the way to hospital in Dullu.

Despite claims of making efforts to root out the tradition by government and non-government organizations, Chhaupadi tradition continues to kill women here. Some deaths even go unreported. According to Bhawane BK, Lalsara's father, keeping women in a shed is a culture he cannot challenge alone. “How can I go against it when the whole society is for it?” he lamented. “If we do not go as per the will of the society, we will be ostracized,” he added.

Not every family, which practices Chhaupadi culture has own Chhaugoth. In Dailkeh and Accham, there are many houses which have common Chhaugoth. “Three or four houses make a common chhaugoth and women of those houses use it when necessary,” Bhawane said.

In his locality, Bhawane has never seen women staying indoors during their periods or post delivery period. He has however known that a number of women in his district have died during their Chhau period. “What is written in destiny happens,” he said apparently trying to console self.

Shahi's family members are not very sorry of her death either. They only wish that the shaman they called for help would have 'worked a little better'. Locals do not speak against the tradition univocally either. Only few say that they must resist the ill tradition.

A social activist in Dailekh, Durga Giri, stated that the fear of deity is so deep rooted in people's mind that they are simply not convinced that they must challenge the tradition. People generally believe in shaman and black magic rather than doctors and hospitals here, she said. “The shed made for women is so small and uncomfortable that suffocation is very natural when you stay there. They are vulnerable to animal attack, sometimes human attack as well. But little has changed over the years,” she reported.

As per the data of District Coordination Committee, Dailekh, there are 257 Chhaugoth in the district. Though some families had destroyed them, they were rebuilt. “NGOs, INGOs have spent millions of rupees to report that they have changed the scenario, but we see no change here,” noted Dipendra Bam of Pipalkot.

Following the death of Shanta Shahi, Chamundabindrasaini Municipality has announced to provide Rs 5,000 to the bereaved family. Social activists in the district have vowed to wage war against the chhaupadi culture. Newly elected mayor of the town, Surya Bahadur Shahi has also stressed that necessary steps would be taken in order to spread awareness among people.

He said that his office is planning to buy an ambulance for providing emergency health care to the people. “The Chhaupadi culture must be rooted out at any cost. We are going to take serious steps against it. In the 21st century our girls and women are dying so pathetically, this is not tolerable,” he told Republica.

Rabi Lamichhane was sued to change the balance of power: Pokharel
6 minutes ago

Gold price rises by Rs 200 per tola
38 minutes ago

Far West of Nepal  at high seismic risk
38 minutes ago