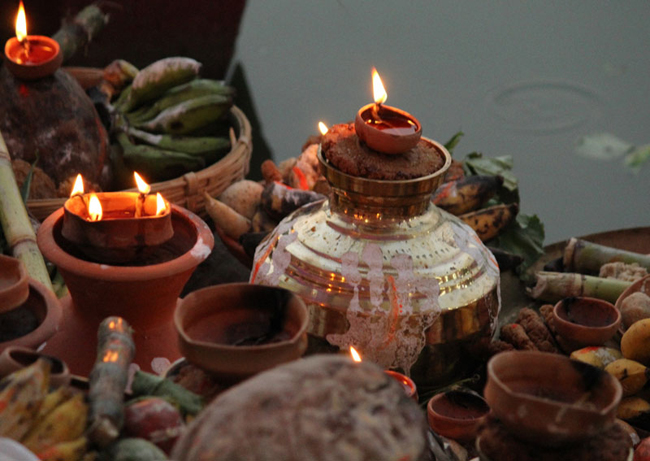 MAHOTTARI, Nov 7: The main ritual of the four-day Chhath festival was observed across the tarai and also  in hill districts on Sunday, with the worship of the sun and making of offerings to the setting sun at river banks and other bodies of water.

During the Chhath festival, devotees offer worship not only to the rising sun, but also to the sun as it sets. In Mahottari, people were in a celebratory mood throughout the day and offered special worship as the sun set.

Preparations for Chhath began in the district about a month ago. River banks and ponds were decorated for the occasion.

Devotees observed their 36-hour fast starting from Saturday. It is believed that fasting during Chhath brings much greater reward than fasting in other festivals. But fasting during this particular festival is also considered very difficult as devotees are not even allowed to drink water at any time during the fast.

Those observing the fast offered prayers to the setting sun on Saturday. They break the fast after worshipping the rising sun.

Of late, Chhath, which is normally celebrated in the tarai plains, is gradually spreading to the capital and other hill districts. Chhath is especially celebrated in Mithila culture, in which it is considered one of the biggest festivals.

The popularity of the festival is also due to the message of peace, harmony and coexistence it conveys.

The various items that are compulsory for Chhath worlship and observance are made by people from various castes, such as Kumhar, Dome, Mali, and Mukhiya.

The travails of the Madhes movement that hindered the development of the district were forgotten as the Chhath fervor gripped everyone. Traditional music was played everywhere while people prayed for peace and prosperity. The festival is observed especailly at Nahayakhari in the district. It concludes with the worship of the rising sun, Monday.