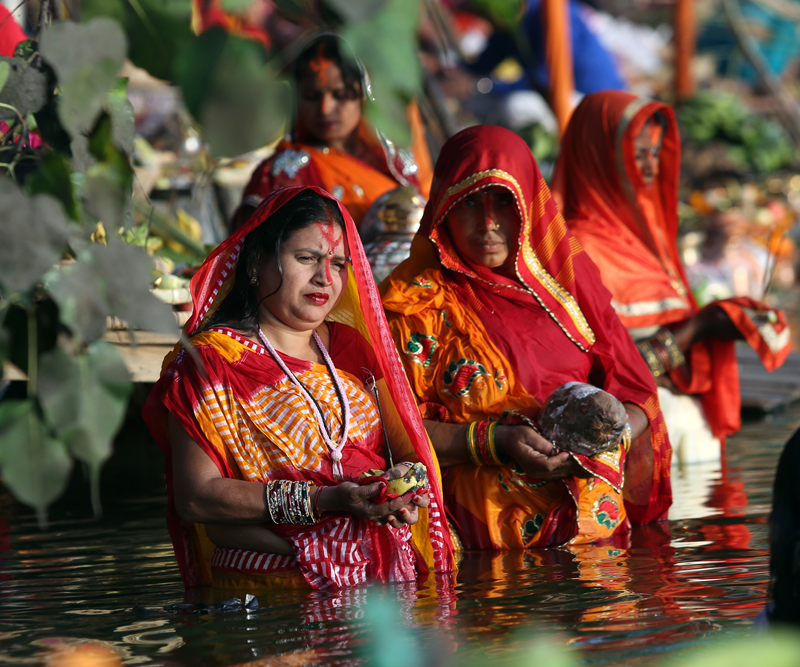 KATHMANDU, Nov 18: The Chhath festival began on Wednesday. The four-day-long festival is being celebrated mainly by Hindus in the Terai/Madhesh region of Nepal. People from Terai region are observing Chhath festival in various parts of the Kathmandu Valley including Ranipokhari, Gaurighat, Kupandole.

Chhath festival is celebrated in between Kartik Shukala Chaturthi and Kartik Shukla Saptami as per the lunar calendar.

It usually falls between October and November in the Gregorian calendar. The Sun considered as the God of energy and of the life-force, is worshiped during the Chhath festival to promote people’s well-being, prosperity and progress.

The ritual of Chhath festival includes taking holy bath, fasting and worshiping the Sun for a long time and offering prasad and argha (curd) to the ‘Rising and Setting Sun'.

Chhath is also the festival of bathing and worshipping that follows a period of abstinence and segregation of the worshiper from the main household for four days.

During this period, the worshiper observes purity, and sleeps on the floor on a single blanket. This is the only holy festival which has no involvement of any pandit (priest). The devotees offer their prayers to the setting sun, and then the rising sun in celebrating its glory as the cycle of birth starts with death. It is seen as the most glorious form of Sun worship.

Main rituals of the festival, observed in succession in a period of four days, include Arba-Arbain, kharana, offering argha to the setting sun and also offering argha to the rising sun. Arba-Arbain ritual is observed on the first day. This ritual is also called nahaya-khaya. Devotees start observing fast from this day and abstain from eating meat and fish, onion, garlic, millet and lentils. They take holy dips in ponds and rivers on this day in the early morning and start the fast.

On the second day (panchami), kharana ritual is observed, which is also known as ‘reduction of sins’. A paste prepared by mixing rice flour and holy water is sprinkled over the place and the altar for performing Chhath rituals. The devotees observe a complete fast on this day without drinking even water. They offer rice pudding to the moon and partake this offering. On the third day of the festival, various delicacies are prepared from flour of rice and wheat grains ground in traditional grinders.

All family members go to the ponds or the banks of the river, carrying a variety of offerings, amidst singing of devotional and folk songs. Parvan rituals are observed on the fourth day or the last day of the Chhath festival. On this day, the devotees go to the banks of the pond or the river, specially anointed for the rituals in the early morning.

As per the myth, human civilisation developed on the river banks and the sun and water are the most essential elements out of the five main elements that sustain life on earth.

JANAKPURDHAM, Oct 30: The rituals associated with the Chhath festival are commencing from Thursday. ... Read More...

Govt itself has obstructed construction of Gautam Buddha International Airport: Poudel
7 hours ago