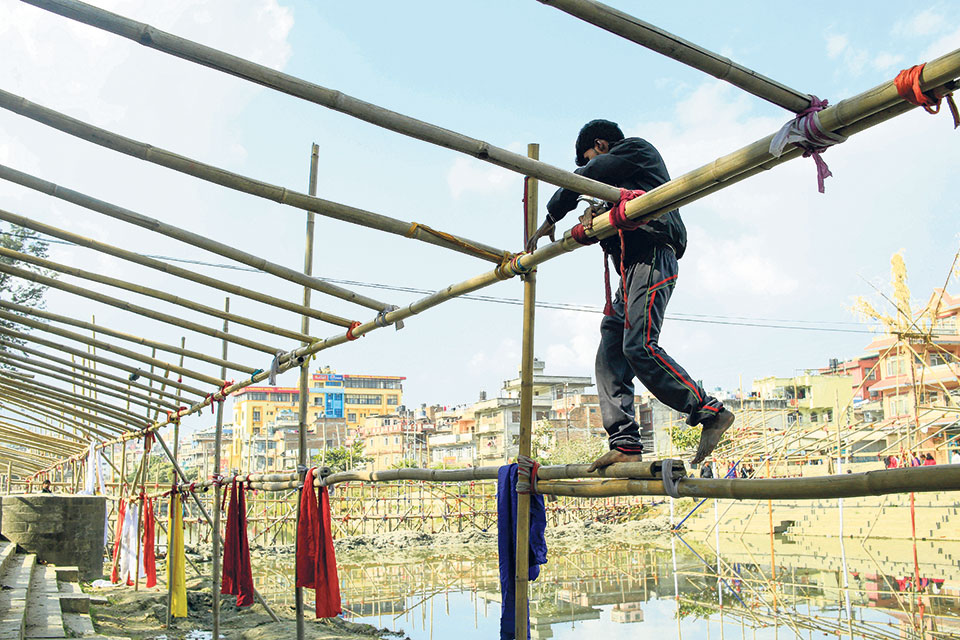 Workers busy in preparing a stage for the upcoming Chhath festival at Guheshwari in Kathmandu on Saturday. Photo: Dinesh Gole/Republica

LAHAN, Nov 11: Bhootnath  Upadhyaya, 65, of Lahan Municipality-10, has seen Chhath being celebrated in his family  since his childhood. Although his family is of hill origin, they have  been celebrating the festival of the Madhesi communities for a long  time.

“Since an early age I have seen my parents celebrate Chhath,” he said. “We will give continuity to the tradition.”

Dambar Kumari Shrestha, 70, of Golbazaar in Siraha district gave birth to her son 55 years ago after she had observed a fast during the festival. She has been celebrating Chhath ever since.

Although she is of hill origin she celebrates the festival and her daughter-in-law Ranju now helps her with the festivities. Ranju also wants to give continuity to the tradition which was started in the family by her  mother-in-law.

Dambar Kumari’s experience is one of lowering the barriers  between  Madhesi and Pahadi, Hindu and Muslim,  Dalit and non-Dalit while celebrating the festival. According to her, the beauty of Chhath is that it  brings all the communities and castes together.

While the Madhesi community celebrates  by undertaking fasts, the  hill communities  eat non-veg food items for the celebrations.

“At the ghat during Chhath, there is no indifference between people of Hill and Madhesi origins,” she said.

Chhath reducing social discrimination
Laljhari  Mallik of Siraha Municipality-2 has been celebrating Chhath at the  local public pond for several years. Women of various other castes also  celebrate at the same pond.

Even though people of  other castes discriminate against her all year round, they all  come together while celebrating  Chhath.

“We  pay no attention to caste during Chhath,” she  said. She added that  all the women offer  prayers to the same sun.

“Even though the Puja materials of people from different castes come in physical contact we pay no attention,” she said.

Social discrimination, which is now illegal,  is  still widespread in the Madhesi communities. But Chhath  has been  known to bring  people  from different castes together.

Dom is the most discriminated caste in the Maithili and Bhojpuri communities.

But Chhath is incomplete without them. Dhhaki, Daura, Koniya, and Daliya which  are prepared by them are all needed for  celebrating Chhath.

This tradition  helps to recognize this caste as an important part of the community.

Assistant Professor of Maithili at the Suryanarayan Satyanarayan  Marwaita Yadav Multiple Campus, Umesh Jha, claimed that the festival  strengthens  unity among various castes in the community.

With  Chhath now just around the corner, the Dom community is filled with energy.

They are all busy preparing the materials for the celebrations. They are also filled with happiness as Chhath puts social discrimination on  hold.

JANAKPURDHAM, Nov 2: The festival of purity, goodwill and faith, Chhat is being observed with high regard and much fanfare... Read More...

KATHMANDU, Oct 19: Prime Minister Pushpa Kamal Dahal has said that the government is working on forging an agreement among... Read More...

Mayor Shah’s clarification to Bhim Rawal: I held meeting with US envoy after permission from foreign ministry
19 hours ago

20 ‘unlucky’ candidates who lost HoR election even after securing 30,000 plus votes
10 hours ago

20 ‘unlucky’ candidates who lost HoR election even after securing 30,000 plus votes
10 hours ago
Import of EVs crosses 1,000 units during mid-July to mid-November
11 hours ago