Chepangs sing their hearts out to overcome Dashain blues 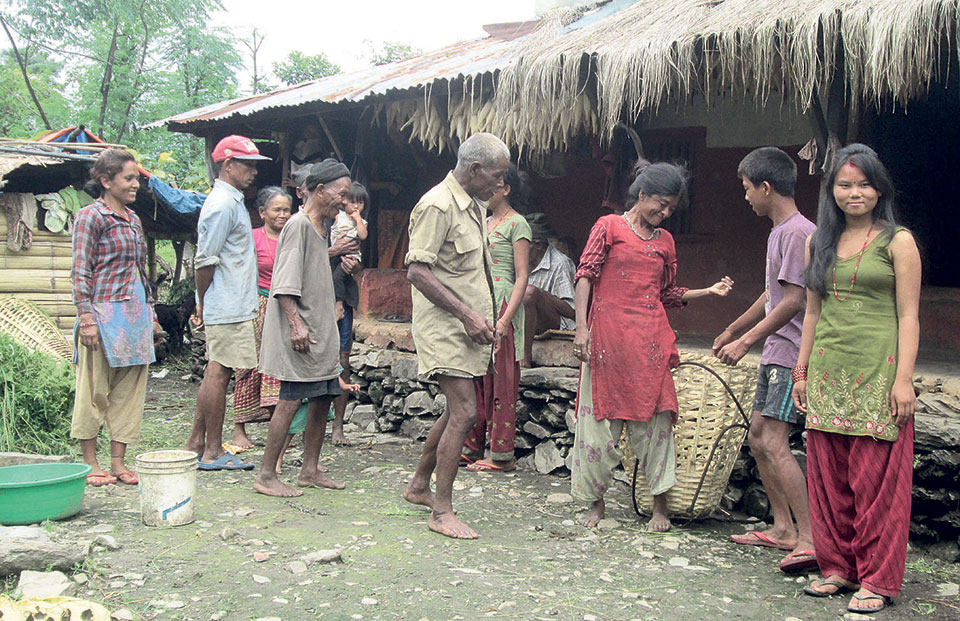 LAMJUNG, Sept 25: Sukaman Chepang was singing loudly while grazing cattle in a green pasture near Marsyangdi River on Friday. A day before it was Gatasthapana, the first day of the Dashain festival. Arrival of Dashain should have reflected happiness on his face.

However, he looked sad. And the song, which not everyone would understand due to the typicality of the language, seemed to reflect the same gloomy mood. “Dashain is here, but what to do. For poor like me, festivals bring a lot of tensions,” he said.

Upon insistence he interpreted the song. “Life has become synonymous to grievances and good food never comes my way. However, I would eat gratefully whatever comes my way, if my beloved offers it.”

Sukaman is quite aged and though he says his life has remained entrenched in sorrow, he is quite romantic. “I am 67. Life has passed just like this. It was always a struggle to survive,” he said. “We village folks sing songs because it takes away the pain for some time. Songs of love and nature make us feel good and help overcome grief,” he added.

The festival of Dashain has taken toll on his people’s happiness, he says. Chepangs are used to living in extreme poverty. Though on usual day it feels casual for them, they get sentimental about their poverty when festivals near, he said.

“Our food is just roots, air potato, among others from the jungle. We don’t have access to other eateries in the jungle. But as this is a huge festival, we feel worried for feeding delicacies to our children,” he explained.

As Sukaman said, the Chepang community in Lamgunj is not happy with the coming of the festival. The festive vibes have not touched them. Around their tiny huts are seen little children clad in dirty, worn out clothes.

Some are seen even naked. Youths and elders are not wearing anything better either.  If you ask them about Dashain, they will give a common answer - For poor people like us it does not matter if it is Dashain or Tihar? We have nothing to do with it.

According to Om Maya Chepang, 44, Dashain does not bring happiness to them whether they manage to celebrate or not celebrate it. Those who celebrate a little do so by borrowing money from somewhere. Right after Dashain, the debt starts dragging them into trouble. “So, we do not feel relieved whether we buy anything during Dashain or remain silent. We cannot keep our children starving in Dashain. That’s the problem,” she said.

Om Maya has memories of making some savings for Dashain in the past. But this time, she does not have a penny, she says. “I could not save anything for this Dashain. During the biggest festival of the year, we would also have loved to eat some delicacies. But as it is not easy to manage it, it’s better for us to remain satisfied with whatever we can afford,” she said.

Sukuman, being elder one in the community, often gets surrounded by others. Even on Friday, he was surrounded by his villagers. While answering the queries of Republica, the Chepang people were discussing among themselves as well. Though they need money to buy clothes and food, there was something they get for free and that was no less beautiful, they shared. “You like songs of our language?” asked a women from the group to this scribe. “We have songs, we dance and we enjoy,” she added.

Sukuman intervened. “Yes, she can sing very well. Along with her, some others also sing very well,” he said, adding that songs and music come for free and they enjoy it to.

Some women in the community started to blush out of shyness. They said they would like to sing a little, but were feeling odd. Amid this, Kanchhi Chepang started to sing - “Struggle has no end, no trace of comfort in life.” All the Chepangs, who could internalize the meaning of the song, then starting humming along. She added another line - What is Dashain, what is Tihar for poor people, my heart is always in tears.”

Though the song was seriously sad, they were enjoying the lyrical moment. As if they always longed for it, they were taking turns and singing numbers after numbers. Sukuman remarked that such kind of warmth and togetherness fills them with life.

There are around 11 households of Chepang in Chepetar 9. According to Hiramaya Chepang, the only comfort in the community is that ‘everyone is poor’. “When everyone is like you, it feels okay. No one has better condition than the other. We get to eat rice occasionally. Most of the times, we depend on cornmeal and fruits found in the jungle,” she narrated.

Just nearby their settlement, Bhramin and Chhetri families however always cook rice and spread around the sweet smell of rice, Hiramaya stated. “Here, in our place, some times we do have, some times we don’t have food to eat. It’s just like this,” she added.

The Chepangs have been living here since seven generation in extreme poverty.

Gearing up to launch novel 'Rani'
9 hours ago

12 culprits behind Baduwal’s murder made public
6 hours ago