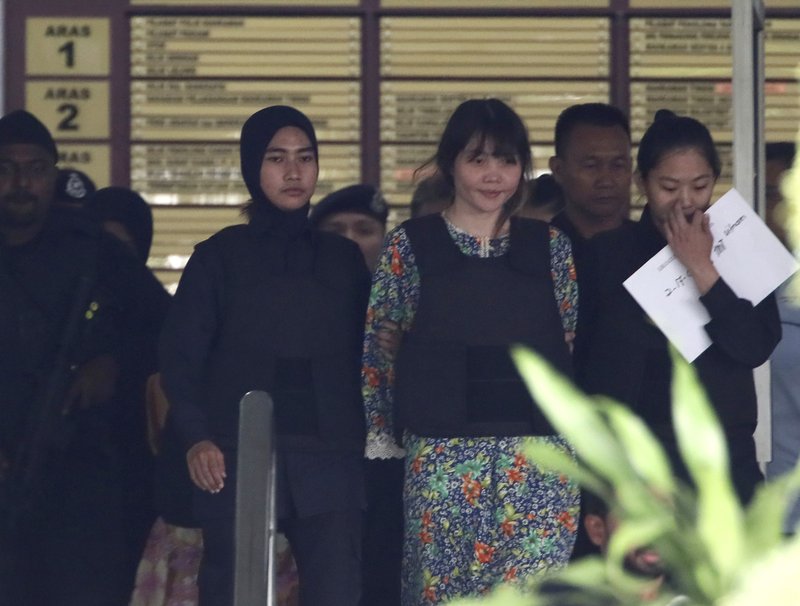 SHAH ALAM, Oct 5: A government chemist testified Thursday he found traces of the banned VX nerve agent on the two women who are standing trial in Malaysia on charges of murdering the estranged half-brother of North Korea’s leader.

The testimony was the first evidence linking VX to Indonesian Siti Aisyah and Doan Thi Huong of Vietnam, who are accused of smeared the nerve agent on Kim Jong Nam’s face in a brazen assassination inside a crowded airport terminal in Kuala Lumpur on Feb 13.

Raja Subramaniam, who heads the government’s Center of Chemical Weapon Analysis, said he found VX in its pure form and VX precursors on Huong’s white jumper and found a degraded product of VX on cuts of Huong’s fingernails.

Huong was seen on airport surveillance videos wearing a white jumper emblazoned with the big, black letters, “LOL,” the acronym for “laughing out loud.”

The chemist, who is the only Malaysian with a PhD in chemical weapons analysis, said earlier in the morning that laboratory tests detected VX acid, a degraded product of the nerve agent, on Aisyah’s sleeveless T-shirt.

He said VX will degrade once it is exposed to the atmosphere, leaving degraded products of VX, and the best decontamination method is to wash under running water and physical scrubbing within 15 minutes of exposure to VX.

Raja also confirmed that he found VX on Kim’s face, eyes, clothing and internally in his blood and urine.

Aisyah and Huong have pleaded not guilty to the murder charge that could bring the death penalty if they are convicted. They have not testified but their defense has said the women were duped by North Korean agents into believing they were playing a harmless prank for a hidden-camera TV show.

Gooi Soon Seng, lawyer for Aisyah, requested to view Huong’s LOL jumper which was sealed in a transparent plastic bag before it was officially admitted as evidence. But Raja told the court that the VX is still active and that it would be safer to view it in the laboratory.

Gooi told reporters outside court that detection of VX on the women was not enough to convict them.

“If I have the knife, it doesn’t mean I killed the person. They must have other stronger evidence,” he said.

He also said Raja was inconsistent and shouldn’t be afraid to open the bag with Huong’s shirt since he testified VX could be easily washed off and doesn’t evaporate quickly. The VX-tainted evidence from Kim’s body and clothing was presented in court Wednesday in sealed plastic bags and the lawyers and court officials wore surgical masks and gloves.

Raja earlier described VX as the “deadliest nerve agent created” and literature showed that 10 milligrams could be fatal. He said VX is oily and difficult to detect as it is colorless and odorless, and can be easily transported in a water bottle. He said Malaysia’s airports do not have the special equipment needed to detect VX.

Earlier witnesses have testified Kim suffered symptoms of chemical poisoning quickly and died from acute VX poisoning within two hours of the attack.

VX is banned by an international treaty as a weapon of mass destruction but is believed to be part of North Korea’s chemical weapons arsenal. Kim was the eldest son in the current generation of North Korea’s dynastic rulers but was believed to have been cast out by his father and had lived abroad for years. He reportedly never met current leader Kim Jong Un, who is widely believed to have perceived his older sibling as a threat and targeted him for assassination.

The trial is being closely watched by the Indonesian and Vietnamese governments, which hired the defense lawyers for both women.

CHITWAN, March 31: The father of a woman who was found hanging at her home in Devghat earlier this week... Read More...

DANG, July 11: The police have arrested three suspects including the mastermind of murder of Tulsipur-based businessman Rajkumar Shrestha from India. Read More...

BoK announces 25% cashback on mobile top-up
22 hours ago
Amid coronavirus outbreak in Japan, one Nepali man among 123 others rescued from Tokyo
6 hours ago

Dry landslide kills one, injuring four others in Dadeldhura
2 hours ago