Chelsea through on penalties, Bournemouth lose to Wigan 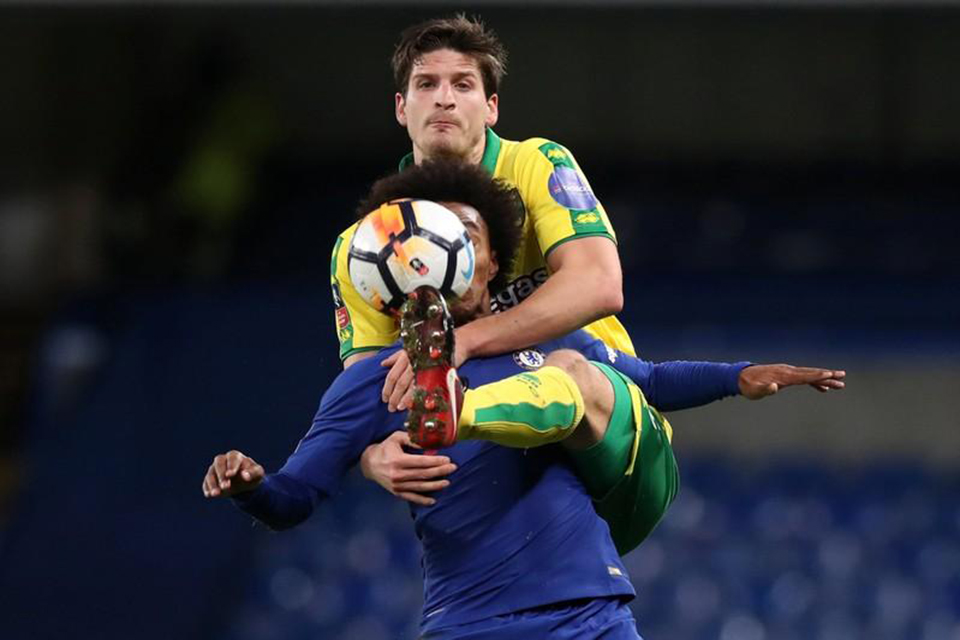 LONDON, Jan 18: Chelsea won a penalty shootout to beat second-tier Norwich City on Wednesday and sneak into the FA Cup fourth round following a tempestuous replay that ended 1-1 after extra time with the Premier League champions reduced to nine men.

Chelsea manager Antonio Conte was fuming at the final whistle after Pedro and Alvaro Morata were dismissed in extra time and two penalty appeals had been waved away, but the Premier League champions regained their composure to win the shootout 5-3.

Eden Hazard stroked home the winning penalty to decide what had begun as a dire spectacle until Michy Batshuayi gave Chelsea the lead in the 55th minute before Jamal Lewis leveled in stoppage time for the Championship side.

Swansea City, the Premier League’s bottom team, also reached the fourth round with Wilfried Bony grabbing the winner in a 2-1 victory over Championship leaders Wolverhampton Wanderers but it was a grim night for the top flight’s Bournemouth as they were dumped out after an embarrassing 3-0 replay defeat at third-tier Wigan Athletic.

It has been a dismal start to 2018 for Chelsea, who came into Wednesday’s match having drawn their previous four games, and the performance against Norwich will have done little to convince fans they have turned a corner.

They did at least find the net, however, which they had not done in their last three matches, with Batshuayi tapping home Kenedy’s cross from close range.

Yet most of the drama was still to come and Norwich leveled when Lewis headed home a devilish Timm Klose cross in stoppage time.

Chelsea was aggrieved not to get a penalty when Willian appeared to be tripped in the area only for referee Graham Scott to wave away his appeals, even after consulting the Video Assistant Referee (VAR).

Worse was to come for Chelsea as Pedro was dismissed for a second booking and Morata got his marching orders when he was adjudged to have dived in the box and received a second caution.

The shootout, however, went like clockwork for Chelsea as they converted all their kicks after Nelson Oliveira had failed to score Norwich’s first.

Norwich manager Daniel Farke thought the game was there for the taking.

“To be honest it’s big disappointment, some of the lads are sitting with tears in their eyes in the dressing room,” he told.

Wigan, who won the competition five years ago but have since slipped down the divisions, overcame a weakened Bournemouth side with a first-half effort from Sam Morsy and quick-fire second-half goals from Dan Burn and Callum Elder.

Bournemouth made eight changes to the side that had beaten Arsenal on Sunday, clearly signaling where the FA Cup lies in their priorities as they battle to steer clear of the Premier League relegation zone.

Morsy swept home after Will Grigg’s initial effort was saved, substitute Burn volleyed in from Max Power’s cross and Elder headed in at the far post to complete a superb victory for the lower league side.

Wolves, however, equalized after 66 minutes through Diogo Jota only for Bony to poke in at the other end three minutes later after the visitors failed to deal with Tom Carroll’s cross.