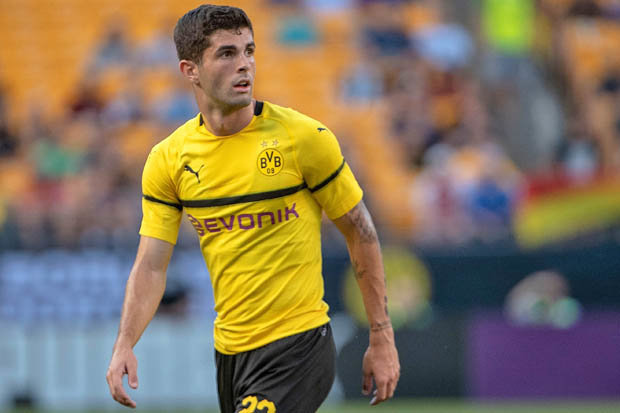 Chelsea have agreed a £57.6m deal with Borussia Dortmund to sign Liverpool and Manchester United target Christian Pulisic with the attacker being loaned back to the German club for the rest of the season.

Pulisic joined Dortmund from PA Classics in 2015 and has developed in to one of the most exciting young attackers in world football having provided 15 goals and 24 assists in his 115 appearances for the Bundesliga giants.

However, his future at the Westfalonstadion has been in serious doubt in recent months as his contract was due to expire in the summer of 2020 and Pulisic had made it clear he wasn’t going to sign an extension.

The situation led to interest from some of Europe’s top clubs with ESPN claiming that Liverpool, Manchester United and Bayern Munich are among those to have registered their interest in signing Pulisic.

Jurgen Klopp knows the United States international well from his time at Dortmund and at one stage Liverpool were regarded as favourites to sign the winger while United have also been touted as a possible destination after Pulisic admitted he was keen to play in the Premier League.

However, Chelsea have stolen a march on their rivals as it was confirmed today that they’ve agreed a deal to sign the 20-year-old with ESPN claiming the Blues have paid £57.6m for his services.

Dortmund were reluctant to lose Pulisic mid-season so Chelsea have agreed to loan the attacker back to the German outfit for the rest of the season as part of the deal, so he won’t link-up with his new team mates until the summer.

Dortmund sporting director Michael Zorc is quoted by ESPN as saying in a statement:

“It has always been Christian’s big dream to play in Premier League. This certainly has something to do with his American origin and thus we were not able to prolong his contract.

“Because of this background and with his contract running down in 2020, we decided to accept Chelsea’s incredibly lucrative offer.

“Christian Pulisic has a flawless character. I am sure he’ll will do all he can in the coming months to contribute his big qualities to the squad and achieve Borussia Dortmund’s sporting goals with his teammates.”

Pulisic has released a lengthy statement on social media thanking Dortmund and their fans but he also expressed his excitement at starting a new life in England at Chelsea. He said on Twitter:

“In the summer of 2019, I move on to Chelsea and to a new competition, the English Premier League. It’s a privilege to have signed for such a legendary club and I look forward to working hard towards being a contributor to their team of world class players, Looking forward to working with Maurizio Sarri and his technical team.”

This is certainly something of a coup from Chelsea to have signed one of the most talented young attackers in the world and Pulisic should prove to be an excellent addition to their squad over the coming years.

However, this deal is only going to fuel speculation surrounding the future of Eden Hazard with the Belgian international continuing to be linked with a move to Spain having so far failed to sign a new contract at Stamford Bridge.