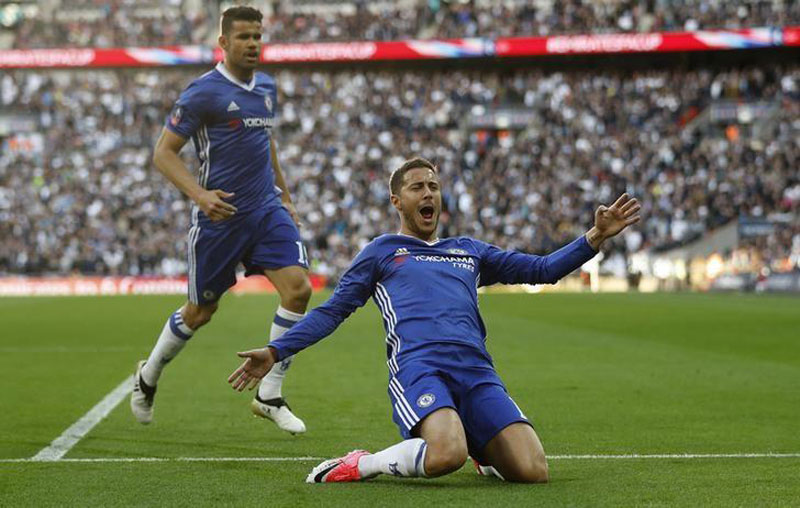 It was only the fourth time in the famous old knockout competition that a semi-final had featured the current top two in the top flight and it did not disappoint.

Brazilian Willian, surprisingly selected ahead of Hazard in the starting line-up, twice put Chelsea ahead in a sizzling contest, first after four minutes with a free kick and then close to halftime from the penalty spot.

Twice Tottenham roared back with Harry Kane heading them level after 18 minutes and fellow England international Dele Alli making it 2-2 with a superb finish in the 52nd minute.

Tottenham, who are four points behind Chelsea in the Premier League after a brilliant run of seven successive wins, dominated at times but their hopes of a first FA Cup final since 1991 were sunk late on by two moments of magic.

First Hazard, who replaced Willian, buried a low shot past Hugo Lloris after 75 minutes, then Matic's 25-metre piledriver sank Spurs who have won only one of their last nine matches at Wembley and have lost seven straight FA Cup semi-finals.

It was a huge win for Chelsea who have wobbled lately with two league defeats and they will face either Arsenal or Manchester City in the final when a "double" could be on offer.

"I am proud for this achievement," Chelsea boss Antonio Conte told reporters. "This is my first season in England and it is great to fight for the title and reach the final of the FA Cup."

After a resounding ovation for former England defender and Tottenham's Under-23 coach Ugo Ehiogu who died on Friday the semi-final did not take long to ignite.

Chelsea, with Diego Costa also on the bench, settled quickly and struck first.

Spurs defender Toby Alderweireld was fortunate to escape a red card when his desperate tackle ended Pedro's marauding run, but greater punishment was exacted by Willian who curled a beautiful free kick past a flat-footed Lloris.

Chelsea swarmed around the pitch threatening a second goal but their lead lasted only 13 minutes.

Christian Eriksen's corner was blocked but when the ball came back to the Dane he curled in a low cross and Kane, almost kneeling, feathered a delicate header beyond Thibaut Courtois for his 26th goal of the season.

As Tottenham assumed control Eric Dier went close to giving them the lead with a glancing header from Jan Vertonghen's teasing delivery that floated wide.

Chelsea regained the lead out of the blue.

Eating up the ground on a forward run N'Golo Kante slipped a ball towards the overlapping Victor Moses down the right and he was sent sprawling to the turf by Son Heung-min, playing as a left wing back, who needlessly slid in.

After a short delay referee Martin Atkinson pointed to the penalty spot and Willian rammed it past Lloris.

Tottenham hit back in brilliant fashion seven minutes after the break when Eriksen's teasing ball left Luiz floundering and Alli stole in to stabbed the ball high past Courtois.

Conte then played his trump card.

Costa and Hazard came on and it was Hazard who stunned Tottenham when he was allowed to much space to fire home after fellow substitute Cesc Fabregas's corner was only half cleared.

Matic then sent Chelsea's fans into ecstasy with an unstoppable fourth.