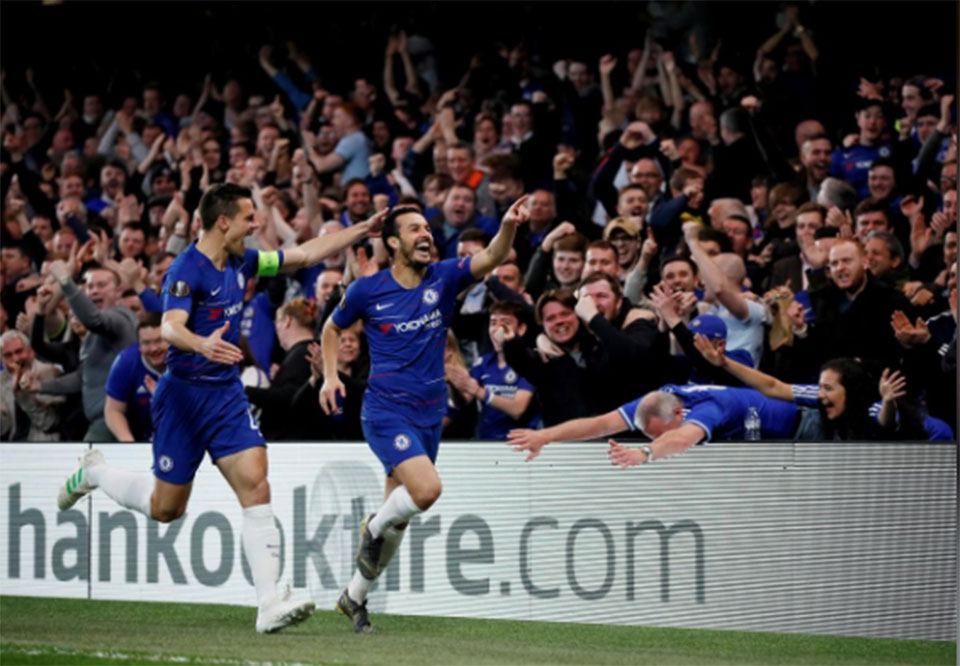 LONDON, April 19: Chelsea reached the Europa League semi-finals by beating Slavia Prague 4-3 in a roller-coaster game on Thursday, helped by a Pedro brace in a first-half onslaught before withstanding a comeback bid by the Czechs after the break.

Chelsea, who will face Eintracht Frankfurt in the last four, were cruising 4-1 at halftime but Slavia’s Petr Sevcik slammed home two strikes early in the second half, narrowing the aggregate score to 5-3.

With the Stamford Bridge crowd increasingly unsettled, and Slavia being roared on by their travelling fans, Sevcik spurned a chance to cut the deficit further.

But Chelsea, having won the first leg 1-0, held on to set up a semi against Eintracht, who beat visiting Benfica 2-0 to go through on away goals after a 4-4 aggregate scoreline.

A Chelsea triumph in the Europa League, a trophy they won in 2013, would secure a way back into the prestigious Champions League if they finish outside Premier League top four this season. They currently sit fifth in the table.

There was little hint of the tension to come when Chelsea raced into a 3-0 lead within 17 minutes, starting with Pedro chipping goalkeeper Ondrej Kolar after exchanging passes with Cesar Azpilicueta and Olivier Giroud in the fifth.

The Spain winger hit the post four minutes later only for the ball to rebound off Simon Deli’s face for an own goal.

It was Pedro who carved out Chelsea’s third when he squared for a simple finish by Giroud and the scurrying Spaniard claimed Chelsea’s fourth in the 27th minute when he converted a rebound after Kolar saved from Giroud.

A minute earlier, Slavia’s captain Tomas Soucek had given the boisterous Czech fans something to cheer when he powered in a header from a corner, leaving the door open for the visitors’ improbable attempt to turn the game around.

Chelsea coach Maurizio Sarri said he had to get to the bottom of the familiar problem of his side losing their way in the second half of matches.

On Sunday, Chelsea conceded two goals shortly after the break in a 2-0 defeat at Liverpool in the Premier League, a pattern seen in other games.

“As usual in the last two months we started very badly in the second half,” Sarri told reporters. “It’s a big problem... We need a solution, we need to solve this problem.”

Sarri, who has never won a major final as a coach, said he was determined to see his side triumph this time.

“If we had managed the first half better, I think we could have gone through,” he said. “Everyone says the English Premier League is the example to follow and that we cannot play against teams like this. But I think we showed today that we can.”

I think it's a goodbye, says Hazard

BAKU, May 30: After scoring twice in Chelsea’s 4-1 win over Arsenal in the Europa League final, Eden Hazard said... Read More...