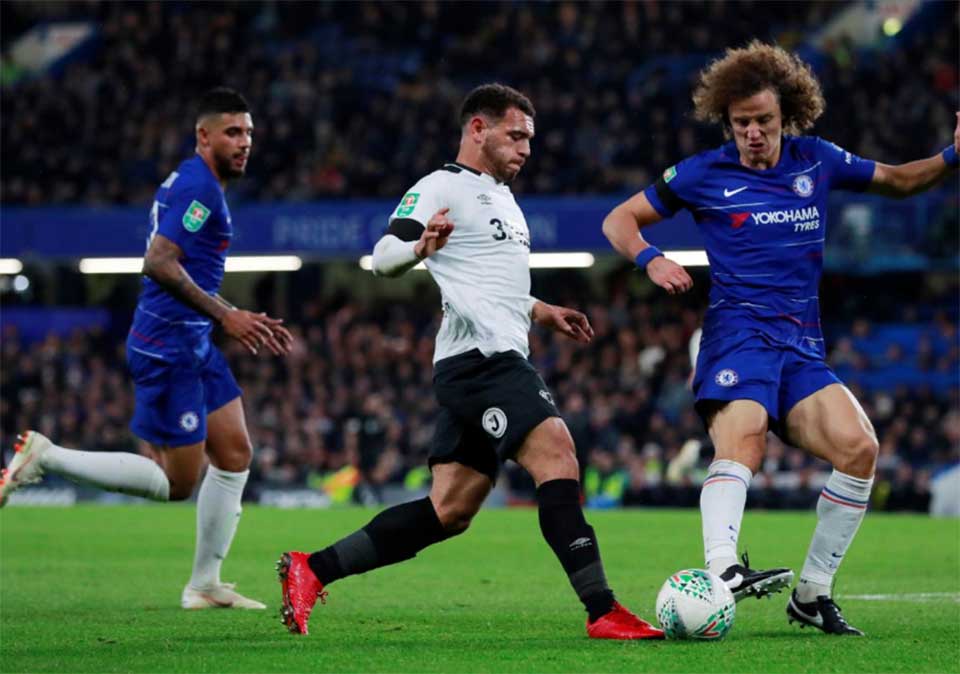 LONDON, Nov 1: Chelsea reached the League Cup quarter-finals thanks to two own goals in a 3-2 win over second-tier Derby County on Wednesday as Frank Lampard’s return to his former club ended in disappointment.

Tottenham Hotspur will join them after Son Heung-min scored twice in a 3-1 win over West Ham United and Arsenal reached the last eight after an uncomfortable 2-1 home victory over third-tier Blackpool in which both teams ended with 10 men.

Second tier Middlesbrough also reached the next round with a 1-0 win over Premier League Crystal Palace as manager Tony Pulis got one over his former club thanks to a thunderbolt finish from Lewis Wing.

Derby manager Lampard, who enjoyed 13 hugely successful years as a Chelsea player, watched his side put up a brave fight against their Premier League opponents, twice levelling the match after calamitous own goals.

On-loan Chelsea defender Fikayo Tomori missed his attempted clearance and watched in Halloween night horror as the ball ricocheted off his standing leg and deflected into the net to put the hosts ahead after five minutes.

Derby equalised when Jack Marriott made the most of a slip-up from Chelsea defender Gary Cahill to finish calmly into the far corner, but fell behind again as Richard Keogh poked a Davide Zappacosta cross from the right into his own net.

Derby refused to lie down and Martyn Waghorn’s close-range finish gave them renewed hope but Cesc Fabregas stroked home at the near post four minutes before halftime to make it 3-2, angering the visiting players, who felt there had been a foul in the build-up.

“I’m disappointed. I think we deserved a draw on chances created,” said Lampard, whose side knocked out Manchester United in the previous round.

“I’m so thankful to the Chelsea fans,” added Lampard, whose name was chanted by the home supporters throughout the match.

“I have nothing but great memories of this place and they thank me like that. I’m a lucky man to have a night like that and I feel it.”

Tottenham beat West Ham with Son scoring in each half before Fernando Llorente wrapped up the win after Lucas Perez had pulled one back at the London Stadium.

The visitors made several changes after losing to Manchester City in the Premier League at Wembley 48 hours earlier but managed to carve out a two-goal lead through South Korean Son.

He put Spurs ahead after 16 minutes with a left-foot shot into the top corner from just inside the area after fine build-up play involving Christian Eriksen and Dele Alli.

England midfielder Alli provided the assist for the second goal but West Ham’s Arthur Masuaku was at fault as he fluffed an attempt to block the pass, leaving Son to slot home in the 54th.

West Ham pulled a goal back with a header from substitute Perez but Tottenham’s Spanish striker Llorente ended the contest with a fine close-range volley from a corner 15 minutes from time.

Arsenal went 2-0 up against Blackpool after Stephan Lichsteiner stretched out a leg to convert into the far corner and Emile Smith Rowe found the net after Carl Jenkinson’s miscued cross came off the crossbar five minutes after the break.

Arsenal’s Matteo Guendouzi was sent off for a second booking after 56 minutes and on-loan Leeds defender Paudie O’Connor headed home for Blackpool with 25 minutes to play.

O’Connor, however, was sent off with six minutes remaining for clattering substitute Pierre-Emerick Aubameyang and Arsenal held out to reach the last eight.

Eden Hazard, on his first start this season for the Blues, netted from the penalty spot in the 76th minute... Read More...

A draw at Sunderland was not the end of the world for Liverpool as they attempt to chase down Chelsea... Read More...