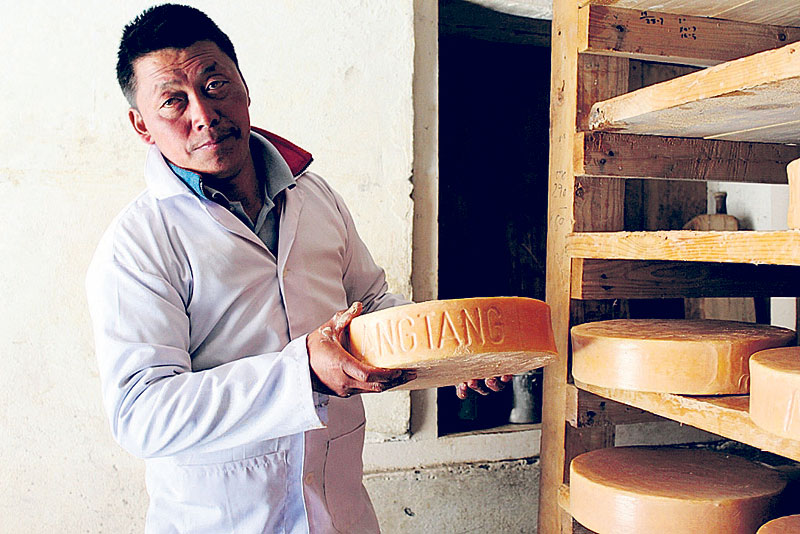 A worker of Langtang Cheese Production Center displays a product of the factory in this recent photo. (Nirajan Poudel/ Republica)

LANGTANG, Oct 29: Many inhabitants of Langtang village at the base of Mt Langtang lost their lives when the catastrophic earthquake struck the country last April. The village was in grief in the initial six months.

But now, the village is rising from the rubbles, thanks to the tireless efforts of the locals who have been busy restoring various old structures. Among other things, the locals have been successful in resuming production of Nepal's oldest cheese factory, Langtang Cheese Production Center, which had remained closed since the earthquake.

The center adopted a unique community-based approach to resume its production.

Various organizations provided aid to distribute two yaks to each family in the village, according to Gyalbo Tamang, chief of the production center. “The production is yet to reach the pre-earthquake level.”

Earlier, the center used to produce around 8,000 kg cheese every year, Tamang said.

“Now the production capacity has decreased and we can produce only 1700 kg cheese in a year due to decrease in the numbers of animal farmers,” he said.

The number of farmers has significantly reduced and the cheese production center cannot continue the production if more farmers are not attracted toward yak husbandry.

Locals of Langtang are now attracted toward hotel business than cow farming, according to Tamang. The locals were displaced after the earthquake fearing landslides and more destruction. Many yaks died after being buried under the rubbles. As a result, farmers stopped yak farming, Nerup Chhiring Tamang, a local of Langtang, said.

Generally, the center produces cheese from April to October. The cheese production process stops in other months due to excessive cold, according to the center.

“People from various parts of the country visit the center with the purpose of learning cheese production.”

KATHMANDU, Dec 5: Production of yak cheese has declined by almost 50 percent over the past three decades. ... Read More...