Chauri festival: A unique opportunity to be with the yaks in their abode 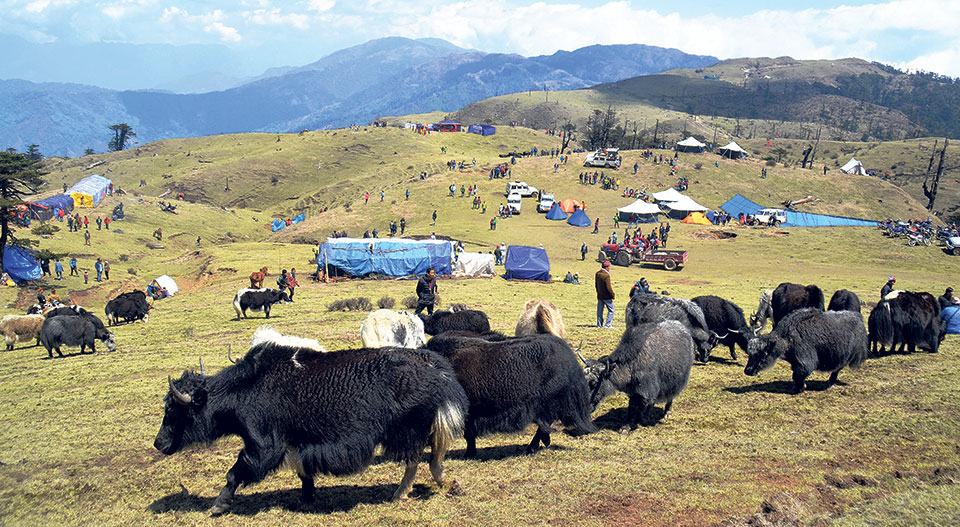 PANCHTHAR, April 15: Strong winds and thunder throughout the night had not allowed guests to sleep and had even scared some of them. Considering the weather, they felt that there was a bleak chance of the better weather in the morning. Without clear weather, their travel to this mountaintop would go in vain.

The morning dawned with perfect weather and the blossoming rhododendrons all around made the landscape spectacular.  Guests got out of their tents and started capturing the marvelous surrounding of Chartare of Panchthar in their camera. At this very moment, the much-awaited moment came: Herds of chauri (yak) rushed to hill.

This was the opening scene of the chauri festival organized on the top of a hill in Chartare. Organized by the local authority with support of several local bodies and the tourism board, the annual festival on Saturday marked its second year. Invitees included tourists from India and Bhutan as well.

Elated locals reported that the festival is amazing and tourists said that it’s one of its kind. Stakeholders had organized it last year with an aim to promote tourism by conserving biodiversity and nature conservation.

“It is mainly associated with Yak farming. The beautiful part is that farmers and entrepreneurs even from Indian and Bhutan participate in the festival,” noted Dilli Amjung, president of Falelung - Kanchanjangha Tourism Promotion Center, the main organizer. “This is the second year of the festival and it was better than last year. We look forward to make it grand in the days to come,” he added.

Amjung shared that preserving the traditional way of chauri farming is the main aim of the festival. He expressed optimism that the festival held at Chartare of Falelung Rural Municipality will help to revive love for chauri farming.

“Since the festival is celebrated on the occasion of New Year, it has received a special significance among its participants. Everyone, who participates in this festival, love to see the beautiful sight of yak heard grazing in the meadows against the backdrop of the rising sun,” Amjung said.

Apart from the majority of Indian and Butanes tourists, there were few European and American tourists as well. Amjung shared that they were spell bound with the scenery and topography offered by the site. “For them, the risk factor turned out to be amazing. If you fail to have balance or roam around in a carefree manner you could fall down the cliff. This is in fact a deadly place,” Amjung stated.

The hill stands at an altitude of 3,300 meters high from the sea level. To reach on the top of the hill, tourists had to walk through steep hills. “The way to the top of the hill is not easy. They trekked on risky paths to reach here and they were excited when they made it through,” Amjung shared. To make the festival grand, the organizing committee brought yaks from various regions.

Apart from the tourists, the festival was participated by political party leaders, government official, among others. “This is a very remote place. Since the markets are not near, organizing this festival here is not that easy,” said Amjung. “But since our guest lists included tourists and dignitaries, we did our best to make it grand,” he grinned.

The festival gave tourists close view of different types of yak along with yak milk products. “Stalls at the event showcased yak products like chhurpi (hard cheese) and ghee. These products are high in demand and stall owners were able to share the qualities of their products,” Amjung said.

Last year the festival drew international attention. This further excited the organizers. The festival has been so much inspirational that even the government of Bhutan has adopted it. “Learning from this, Bhutanese government has also started to organize chauri festival. It equally suits their agriculture and culture too,” Amjung stated.

Apart from the yak and their products, local cuisines at the festival equally enticed the participants. The provincial government has also taken keen interest in it. It has allocated Rs one million for the festival. According to a local farmer, Chandra Nepal, the support of the government is quite remarkable.