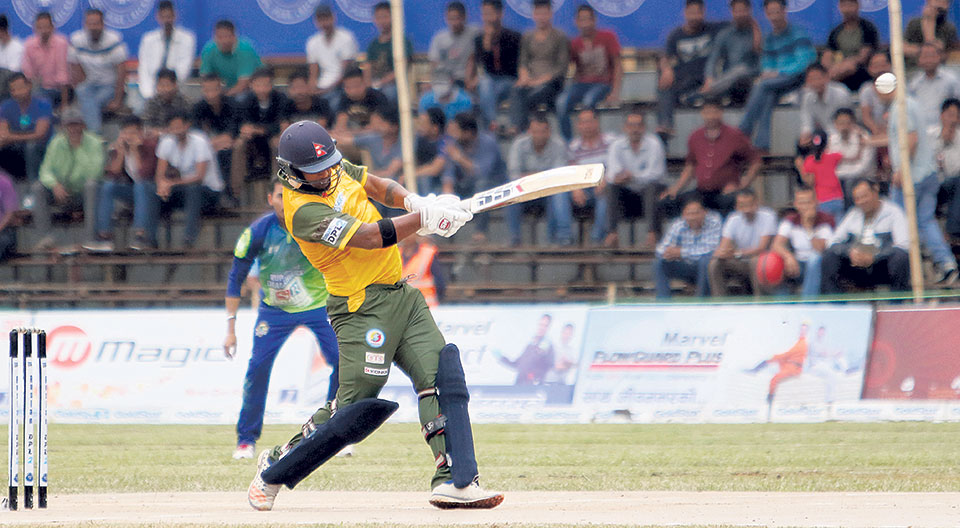 DHANGADHI, April 8: Team Chauraha Dhangadhi has moved closer to the playoffs of the ongoing second Dhangadhi Premier League with a three-run win over strugglers Rupandehi Challengers on Saturday.

The first match between CYC Attariya and Mahendranagar United was abandoned sharing a point between both the team, the second match which was also disturbed by the rain, was limited to eight overs.

Despite the match reducing to eight overs, Sonu Tamang was the highest run scorer of the day with his 34 off 14 balls which included four sixes and a four, while all the other batsmen simply failed to deliver for Chauraha. Likewise, the United Arab Emirates (UAE) recruit Rohan Mustafa hit 15 runs off 13 balls including a six, while Rajesh Pulami Magar added nine runs off five balls with a six. Sunil Dhamala hit six runs, Yogendra Singh Karki scored five, while captain Sompal Kami and Shankar Rana contributed two each.

Sushan Bhari was the pick of the Rupandehi bowlers as he pocketed three wickets giving away 14 runs in the two overs he bowled, while Dipesh Shrestha nicked two. Likewise, Sagar Pun and Shakti Gauchan picked up a wicket each.

In reply, only Sagar Pun of Rupandehi came close to Tamang’s tally as he hit 33 runs off 16 balls which included three sixes and three fours, while similar to Chauraha, the other batsmen failed to perform. Likewise, Dipak Prasad scored 16 off 15 balls including a six, while Sufyan Mehmood added not out eight runs off five balls with a six. Also, Pradeep Singh Airee added six, Siddhant Lohani hit three and Kushal Malla was not out for one. Also, Amar Singh Routela was out for a duck.

Mustafa picked the most wickets for Chauraha as he bowled Pun and Routela out giving away 12 runs in the two overs he bowled, while Lalit Bhandari pocketed a wicket in the win.

Chauraha’s Tamang was named the man-of-the-match and was rewarded with Rs 10,000.

With the win, Chauraha, after playing all the league games, has accumulated six points from five games and is at the second place.

Mahendranagar United will take on Kathmandu Goldens and will be looking to go into the second place with a win, while the latter will be hoping to extend its winning run in the tournament so far. Likewise, Biratnagar Kings will face CYC Attariya with Biratnagar aiming for at least third place, while Attariya will be vying for a playoff spot, at the least, with a win. 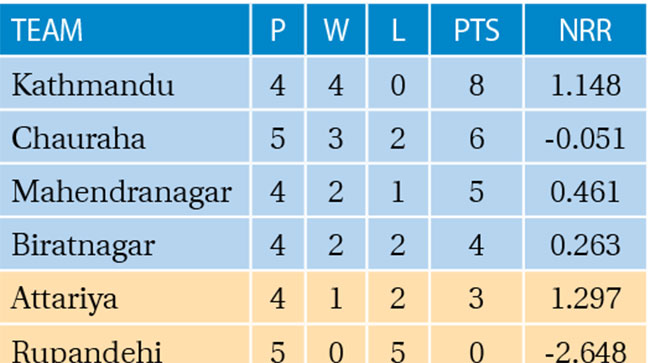 Chauraha risks crashing out after 40-run loss to Attariya