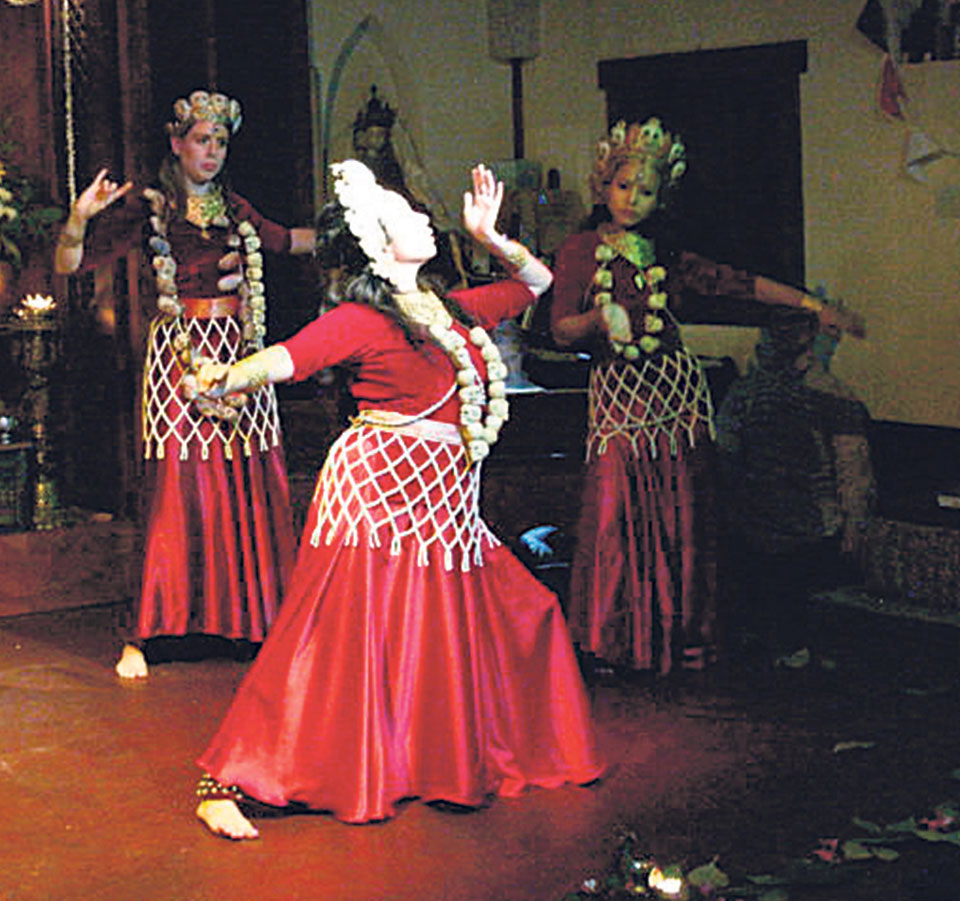 The essence of an ancient dance in a modern world
The common belief is that to experience enlightenment one must sit motionless and be completely still. Dance seems antithetical to enlightenment. But not many know of Charya Nritya, or Charya dance. Charya is a sacred form of Buddhist art, which, if done properly with right understanding, will lead to enlightenment, as per the Newar Buddhist tradition of Nepal.

“It is an important form of Buddhist yoga and a part of meditative practice that is unique to our Buddhist tradition,” said Prajwal Ratna Vajracharya, Nepal’s noted Charya master who is now based in Portland, Oregon, a costal U.S state. “But it’s not just dance. It has the potential to lead one to high levels of tantric realizations.”

More than just dance
Simply put, Charya is a traditional dance form of the Newar community of the Kathmandu Valley. But it is much more than that.

“It is a complete spiritual discipline requiring performance with deep devotion and right understanding,” said Prajwal. “It requires a solid foundation of Buddhism, which makes it a profound form of Sadhana.”

Done through graceful movements of the body, Charya is actually a method of deity yoga performed according to the Vajrayana system of Buddhism. The performers visualize themselves as one of the deities. They adorn their body – the visualized body of the deity – with ornaments. Then they take the threefold refuge – in Buddha, Dharma, and Sangha. A singer chants the deity’s Sloka, or song. And the performer starts dancing.

The dance is beyond conventional. The performer goes into a meditative state, and lets his body flow in movements. And that is not easy. There is a whole science of mudra (gestures of hands and body), that takes several years to master.

The hand mudras represent different energies and moods of the deities. The left hand symbolizes the female energy, which is associated with absolute reality and wisdom, and the right hand symbolizes the male energy, which is associated with conventional reality and skillful activity. When you are moving these two hands in mudra, you are actually creating certain energy fields. When done properly, these fields will remove your negativities and obstacles to spiritual progress.

The symbolism of the ornaments is also important. They are associated with the six paramitas (transcendental perfections) of Buddhism. The necklace expresses dana (generosity), while the bracelets and anklets symbolize sila (morality and self-discipline). Earrings represent ksanti (patience), the sash around the waist symbolizes virya (joyful effort and diligence), and the third eye signifies dhyana (meditative concentration). The crown with its five jewels (or skulls) stands for the integrity of the prajna (wisdom) of the five Buddha families.

“You don’t practice Charya as a form of entertainment. But you do it as a form of spiritual movement, as meditation, as prayer, as sadhana,” Prajwal told a group of 20 Nepali students in Kathmandu recently.

Taking it out to the world
Charya is a unique Nepali Buddhist heritage that is thriving these days. It started in the Kathmandu Valley more than a thousand years ago. But there are some experts elsewhere who are claiming ownership of Charya, which pains Prajwal.

“These days, some Indian and Bengali dancers are claiming that Charya is their dance. They have published books on Charya with claims that it started there,” he said. “These are totally baseless claims.”

Until a few decades ago, Charya was not known to the world. It was limited to Kathmandu’s bahas (Buddhist shrines) where Vajracharya priests performed it as a reserved spiritual practice. As people would not understand the symbolism surrounding it, wider public display was neither easy nor desired. However, along with the development of Buddhism in recent times, Charya dance is also slowly coming up.

Prajwal, through his US-based center Dance Mandal, is teaching Charya to thousands of students across the world. From Brazil to Japan, from Germany to Hong Kong, from Switzerland to Chile, he has students from all continents. He is sort of a lineage-holder of the trade, who learned from his father Ratna Kaji Vajracharya, one of Nepal’s top scholar-practitioners who put in a lot of effort to promote Charya in the modern world. Ratna Kaji wrote about 560 less known Charyas in his two volumes of Chacha Muna (collection of Charyas).

Prajwal has carried forward the knowledge from his father. He is often credited for his contribution to the popularization of dances such as Amoghasiddhi, Arya Tara, Pancha Buddha, and Yogini Mandala.

The tantra of dance
“In Charya, singing is the mantra, dancing is the meditation. When you combine the two – dance and song – that becomes the Hevajra Tantra, from where liberation comes,” Prajwal said. “Through it, you grow spiritually, and you can liberate yourself from the bondages and limitations.”

“You dance with full awareness. You don’t just dance to entertain yourself. If you have complete awareness when you are dancing, it becomes a deep spiritual exercise. If you sing and dance with total awareness, then you would be doing what the yogis and the yoginis did back in the old days.”

Besides the regular dances, Prajwal is also teaching some of the secret Charyas to his students including the Chakra Samvara, Hevajra, Vajravahari, Vajrasattva, and Vajradhateswari.

“I think time has come for people around the world to know about and benefit from the spiritual heritage of Nepal,” Prajwal said. “There is no point keeping it hidden forever.”

“But that doesn’t mean I teach these secret Charyas to anybody who just walks in. They have to study for many years, even up to 10 years, to be eligible for that. First they learn the Slokas (chants). Then they learn the Avalokiteshwora dance, and then the Tara dance. That way, they gradually build up their practice,” he said. “Ten years is a standard time for learning anything serious. Even to get a master’s degree at a university, you need to study for so many years.”

According to him, just doing the body movements, the dance alone, will not help. It is dharma, it is practice, and it is sadhana. “The tantric deities are there in Charya. You do their sadhana with the body movements, only then it becomes meaningful,” he said.

“And the perks are high. Complete liberation is not difficult for sincere practitioners,” he concluded. 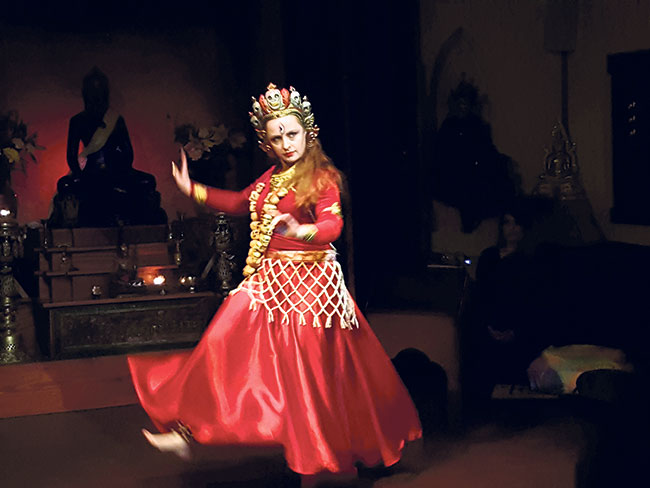 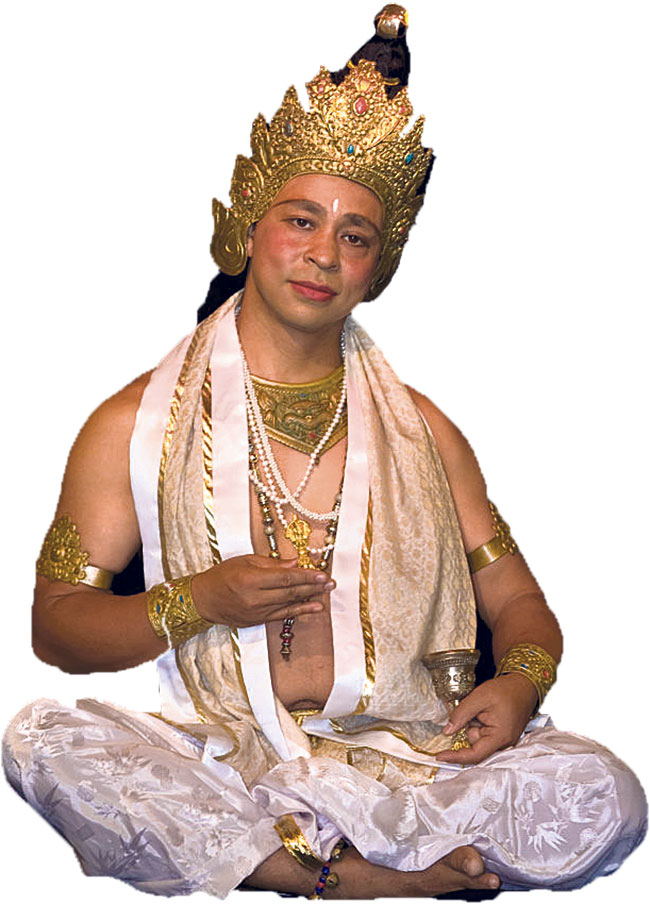 Mukesh Dhakal is your typical college boy. He goes to college, has a great time with his friends, studies when... Read More...

Dahal government hasn’t been able to handle the sensitivities of our northern neighbor with the seriousness the issue deserves ... Read More...

Dancing with the Gods

Like most 20 year olds in their second year of Certified Medical Laboratory Technician (CMLT) course, Rajan Bade too is... Read More...

Weather Alert: Chance of light rain across Nepal
29 minutes ago

Two arrested with 147 grams of brown sugar
47 minutes ago