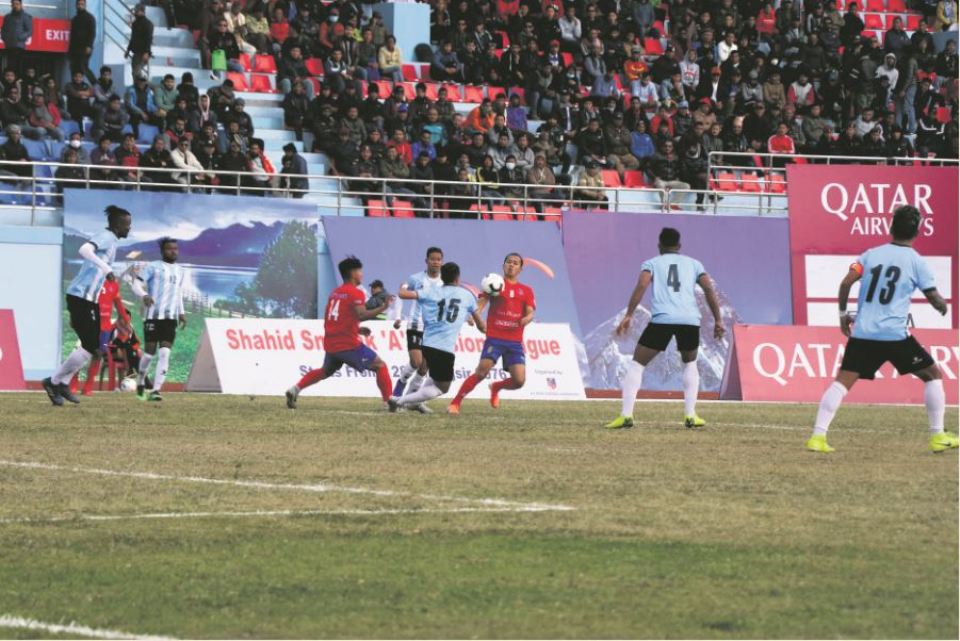 KATHMANDU, Jan 7: The top of the table clash between Manang Marshyangdi Club and Machhindra Club went bitterly sour at the final whistle as the team involved in brawls at the end of a 2-2 draw in the ongoing Qatar Airways Martyr’s Memorial A-Division League in Kathmandu on Monday.

In the second fourth round match played at the Dasharath Stadium in Tripureshwar, the fight started between the two sets of players after the referee blew the final whistle, and then the game saw the officials and security personnel come to the ground to control the players.

However, the game was really exciting between the two best teams of the league this season. Manang took the lead early on in the first half which saw Machhindra being disjointed with its attacking prowess in the start.

Anjan Bista, who served a 45-day suspension for partying late before Nepal national football team’s 2022 FIFA World Cup Qualification match against Kuwait in Thamel, crossed the ball inside the box, and a superb header from Femi Joshua Adewumi went inside the net for the first goal of the game.

But, Machhindra did not give in as it kept on pressurizing the Manang half and dominated the possession in the first half.

Manang, however, kept on creating chances and slowly started building momentum come the 15-minute mark. It got a chance in the 12th minute as the goalscorer Adewumi got a chance to double the lead, but his header from inside the box was off target.

Machhindra started pushing forward with wing play which was the difference in its other games as it utilized the crossing of former Manang man and captain Biraj Maharjan, but he was nullified very properly by the Manang backline.

It got a big chance to equalize in the first half as Bishal Rai have a good through ball to Adelaja Oluwawunmi Somide, but the forward could not reach the ball in time and missed a great opportunity to score in the 17th minute.

Rai had a chance to score a goal himself in the 31st minute, but his testing free-kick was punched away to safety by keeper Deep Karki.

Machhindra kept on pushing hard for an equalizer as the combat attack was too hot to handle for Manang. With the starpower clearly showing, Manang had to be good in defending and it did the work better in the first half.

Another former Manang player Sujal Shrestha hit a shot from a long distance in the 35th minute, but keeper Karki did not sweat to catch the ball easily. It got another chances four minutes later as Abhishek Rijal’s right-footed shot from outside the box was brilliantly turned away to safety by Karki.

Machhindra creating one chance after another, but Manang defended better again. Ranjit Dhimal, the former Three Star Club fullback, fed a good ball inside the box to Rijal, but his header from close range was wide in the 42nd minute. In the third minute of the first half injury time, Rejin Subba got another chance to head the ball from the box, but he could not convert for Machhindra.

Manang was lucky not to concede a goal in the first half, but it got the much-needed goal through Sujal as he hit a left-footed shot from inside the box after receiving a pass from Somide in the 46th minute. Sujal did not celebrate after scoring the goal as he spent eight years in Manang.

Manang started to attack in the second half as Ranjan Bista got a golden chance to retake the lead in the 49th minute, but his free-kick was turned away to safety by keeper Bishal Shrestha, who was also a former Manang player.

Somide headed the ball into the net as Machhindra took the lead in the game for the first time in the 81st minute as the holder Manang was left frustrated as it egded closer to its first loss in two seasons.

But, it is not easy to defeat the league leader as Bimal Rana converted a cross from Jagageet Shrestha as keeper Bishal made an error and could not catch the ball in the 89th minute.

In the other game played earlier on the same day, Jawalakhel Youth Club retained its unbeaten run in the league as it played a 0-0 stalemate with New Road Team.

There will be only one game on Tuesday as the two of the three bottom teams Himalayan Sherpa Club and Friends Club will be looking for their first win of the season.