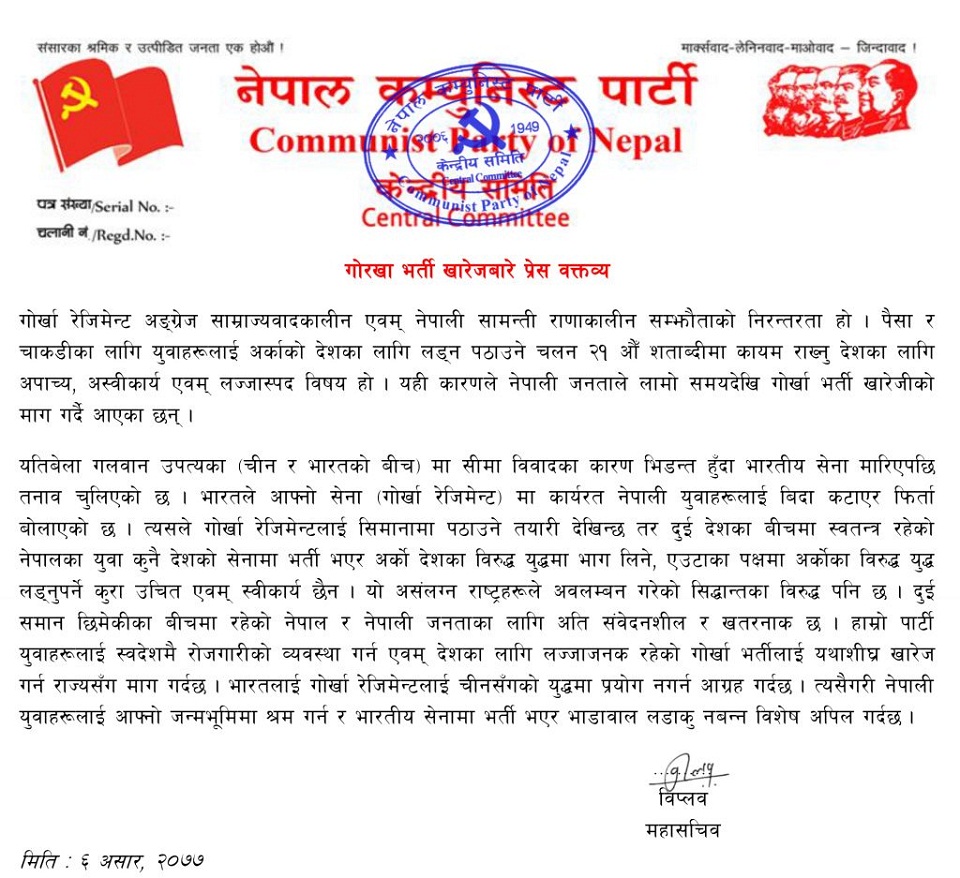 Issuing a press statement, the Netra Bikram Chand-led outfit said that the recruitment of Nepali nationals in Gurkha Regiment should no longer be continued.

The statement of the underground outfit comes in the wake of recent border skirmish between India and China in the bordering Galwan Valley in Ladakh.

"Amid India-China border tension followed by the killing of Indian troops in the Galwan Valley, India has recently asked Nepali nationals in the Gorkha Regiment to rejoin their duties who are currently on home leave. That means the Indian side is preparing to deploy our fellow Nepali nationals in the Indian Army in their battle against China," reads the press statement.

Pointing out that there is a likelihood of the Gorkha Regiment's deployment in the battle against China on behalf of India, the outfit said "Nepal is an independent nation and its youths working for the military of one country should not be used against the other. This will also be against Nepal's Non-aligned foreign policy. It will not be acceptable to our party."

In its press statement, the Chand-led outfit said that both neighboring countries China and India are equally important for Nepal.

"It is a matter of shame that our youths are being used as mercenaries in foreign armies. This is just the continuation of agreements reached between the feudal Ranas and the imperial powers in the past. We urge the government to bar the Nepali youths from joining the Gorkha Regiment and create employment opportunities at home itself," it said.

Moreover, the outfit urged the Indian government not to deploy the Gorkha Regiment in its battle against China. "We also appeal to our Nepali youths not to join the Indian Army in the days to come," it said.

On September 20, when everybody’s attention was on Tudikhel where the government had organized an official event for the celebration... Read More...