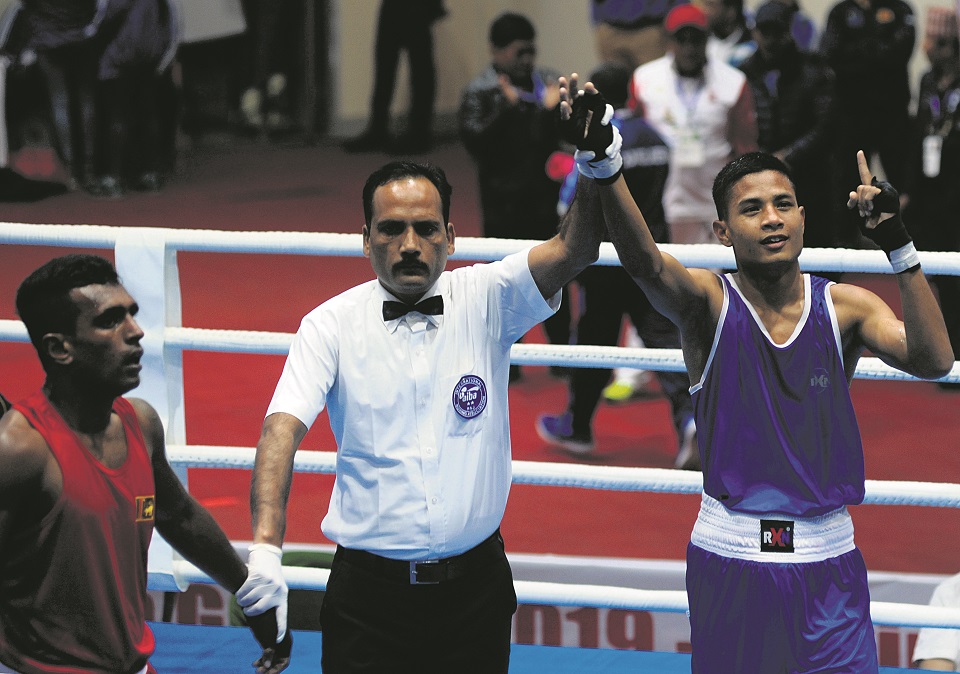 LALITPUR, Dec 9: Nepal will have a chance to end the 20 years of excruciating wait for the boxing glory when nine  boxers go into the ring on Monday and Tuesday.

Since Prakash Thapa Magar and Ram Chandra Thapa Magar won the gold medals in boxing at 1999 South Asian Games--held in Kathmandu, no Nepali boxers have been able to return the gold glory yet.

Shahi overcame Jeewantha Nisshanka of Sri Lanka in men’s light weight (60 kg) category in the semifinal bout. He will face Varinder Singh of India in the final.

Sachin Kumar was the first Indian to fall in the entire competition as he crashed out in the semifinal against Nepal’s Ganesh Pradhan in men’s light heavy weight (81) category. Pradhan will face Rumish Sandakelum Wanni of Sri Lanka in the final. Wanni knocked out Pakistan’s Awais Ali Khan earlier, who had to be stretchered off after he was unable to stand.

All of them will enter the ring in the finals with a single purpose—to return the gold glory in boxing, but it may not come easy as all the finals except one are against the dominating Indian opponents, who have reached the finals in 15 categories (including both men and women) of out 15.

Chandra Kala Thapa also fell to Sri Lankan Krismi Ayoma Lankapurayalage in women’s feather weight (57kg) category in the semis. Lankapurayalage will face Sonia Lather in the final, who advanced seeing off Mehreen of Pakistan in another semifinal.

The finals will take place on Monday and Tuesday.

KATHMANDU, Nov 28: With the wait for a gold medal in boxing stretching back to the eighth edition of the South... Read More...

A fitness center, Gymkhana organized ‘GymKhana Fight Night’ at its premise, Maharagunj on Friday. The night had three boxing and... Read More...