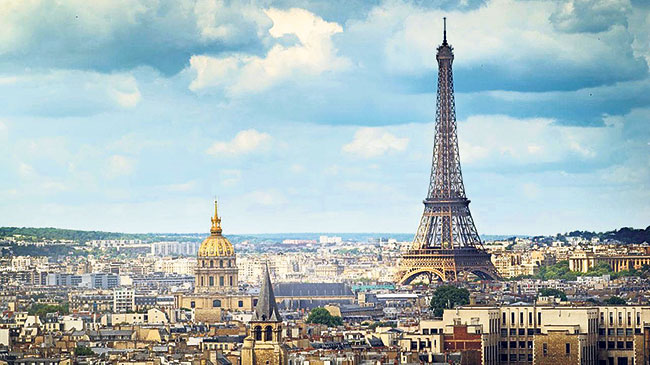 PARIS, April 22: The gunman who shot and killed a police officer on the famed Champs-Elysees just days before the French presidential vote spent 14 years in prison, including for attacking other officers, Frances's anti-terrorism prosecutor said Friday — a lengthy criminal history that gave a jolt to an already nail-biting election and fueled growing security concerns.

Yet, despite an arrest as recently as February, the 39-year-old assailant, Karim Cheurfi, had shown no signs of radicalization, Paris Prosecutor Francois Molins said, and was released for lack of evidence of a threat.

That all changed Thursday when Cheurfi, a Frenchman born in the Paris suburbs, opened fire with a Kalashnikov assault rifle on the crowded boutique-lined boulevard synonymous with French glamour, striking a police officer with two bullets to the head and wounding two others before being shot and killed by police.

Security forces found a note praising the Islamic State group at the scene of the attack, which apparently fell from the gunman's pocket. That, along with an unusually quick claim of responsibility by the Islamic State group were the only signs that he had entered the world of Islamic extremists, Molins said. Scraps of paper scrawled with the addresses of police stations and a satchel of weapons, munitions and the Muslim holy book were discovered in his car.

Thursday's shootings followed the arrest this week of two men in Marseille on suspicion of plotting an attack around Sunday's hotly contested first-round presidential vote, fueling France's worst fear: a terrorist attack as crowds gather at polling stations across the nation.

Polls suggest a tight race among the four top contenders, with far-right nationalist Marine Le Pen — who rails at France's Socialist government for being lax on crime — and Emmanuel Macron, an independent centrist and former economy minister, in the lead.

However, conservative former Prime Minister Francois Fillon, whose campaign was initially derailed by corruption allegations that his wife was paid as his parliamentary aide, appeared to be closing the gap, as was far-leftist, Jean-Luc Melenchon.

The attack in Paris appeared a perfect fit for Le Pen and her barbed criticism of authorities she accuses of being naive on terrorism. The outcome of the election was being closely watched for signs that Europe is moving toward nationalist candidates like Le Pen.

U.S. President Donald Trump waded into the fray Friday, asserting in an interview with The Associated Press that the attack will stoke Le Pen's chances.

Le Pen, who wants France to exit the EU, says her first move if elected will be to regain control of the nation's borders, something she says is a critical component of sovereignty and a way to end what she calls a "sieve" for terrorists.

France is part of a treaty for a borderless Europe, allowing travelers to freely come and go.

Le Pen has hammered at the security issue, and on Friday she demanded the government immediately re-establish border controls. Bernard Cazeneuve, the Socialist prime minister, accused Le Pen of electoral opportunism in the face of a tragedy. He noted that Le Pen's National Front party voted against an anti-terrorism law in 2014 and, in 2015, against a law that beefed up resources for French intelligence services.

Campaigning by the 11 presidential candidates got off to a slow start, bogged down by corruption charges around once-top candidate Fillon before belatedly switching focus to France's biggest fear: a new attack.

The French president will be chosen in a runoff of the top two candidates on May 7.

Sunday's vote is being held under a state of emergency, in place since terror attacks in 2015. Security is tight, with some 50,000 police and gendarmes joining 7,000 soldiers deployed around the nation for the vote. However, it was unclear whether Thursday's deadly assault would sway or dissuade the legions of undecided voters.

"Nothing must hamper this democratic moment, essential for our country," Cazeneuve said after a high-level meeting Friday that reviewed the government's security plans.

But Molins, the prosecutor for terrorism cases in France, underscored the challenge of defeating an enemy hiding within.

"This last dramatic event shows, I believe, that we must remain humble" despite the extraordinary mobilization of anti-terrorism forces, he said.

The attack appeared to fit a pattern of European extremists targeting security forces and symbols of state to discredit, take vengeance on or destabilize society. It recalled recent attacks on French soldiers providing security at prominent locations around Paris: at the Louvre museum in February and at Paris' Orly airport last month.

Whether voters will cast a ballot for security, normalcy or not at all is up for grabs. But pollsters are doubtful the attack will sway the vote.

"What could have an impact is if the candidates try to use the attack" for political gain, he said. "They would pay a heavy price for that."

The slain policeman was identified as Xavier Jugele by a French association of LGBT police officers. Its president, Mickael Bucheron, told AP he would have celebrated his 38th birthday at the beginning of May.

Jugele was among the officers who responded to the gun-and-bomb attack on Paris' Bataclan concert hall on Nov. 13, 2015, among a wave of assaults that night. He returned to the concert venue for its reopening a year later with a concert by Sting.

On Friday, police officers gathered at the spot where their colleague was killed to lay flowers and say farewell.

"This is the moment of paying respect, solidarity and support," said Dennis Jacob of the Alternative Police Union. "To express our sadness and anger facing this new attack in which one of our own has died for France, serving the French population."

BARA, Jan 19: It has been revealed that the two Indian youths found murdered in Karaiya of the district some... Read More...