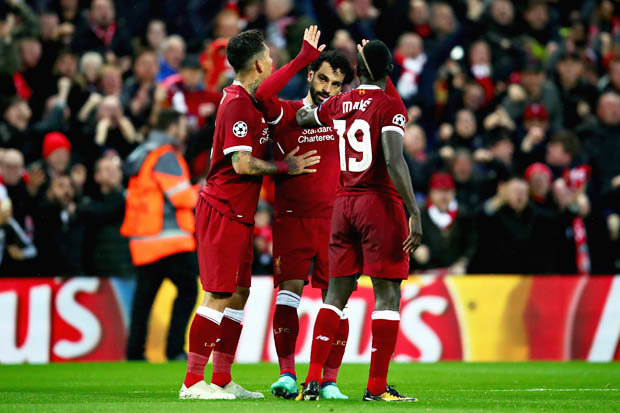 Two men from Rome were arrested by Merseyside Police on suspicion of attempted murder after a man was left with serious injuries following an incident ahead of Liverpool's 5-2 win over Roma at Anfield.

Police said in a statement that a 53-year-old man from Ireland had suffered a head injury and was in a critical condition in hospital.

And it led to a backlash from football supporters who have called on Roma to be expelled from the competition before the second leg.

One wrote: “Roma should be kicked out of champions league and banned for a few years scummy fans they have.”

Another tweeted: “Disgraceful and unacceptable behaviour, Roma should be kicked out of the competition now as a punishment to these idiot fans."

“Roma should be ashamed and kicked out of the champions league they only have their fans to blame!!!” added another.

UEFA have form for banning clubs from their top competition.

Only this week, Greece's oldest football club Panathinaikos were banned for three seasons for failing to pay their debts.

UEFA today moved to condemn the attack and released a statement where they pledged to “deciding on potential disciplinary charges” imminently.

A UEFA statement read: "UEFA is deeply shocked by the vile attack that occurred ahead of the Liverpool FC v AS Roma match and our thoughts are with the victim and his family.

"The perpetrators of this ignominious attack have no place in and around football and we trust they will be dealt with utmost severity by the authorities.

"UEFA is waiting to receive full reports before deciding on potential disciplinary charges."

Liverpool, who won the match 5-2, said they had been in touch with the emergency services and would offer any support they could to the fan and his family.

"Liverpool Football Club is shocked and appalled after a Liverpool supporter was left in a critical condition having been attacked prior to the Champions League fixture against AS Roma," the club said on their website.

"Our thoughts, in the first instance, are with the victim and his family at this very traumatic time."

Television images from the BBC showed groups of youths fighting outside the stadium before the game, with one person seen lying in the street receiving attention while fighting continued. One male was filmed carrying a hammer.

There were also violent scenes before Liverpool's Champions League quarter-final game against Manchester City at Anfield earlier this month, when the home supporters attacked the visiting team's bus with bottles, cans and flares which resulted in the Merseyside club being charged by UEFA.

The police added: "We believe the victim was in Liverpool with his brother for the Liverpool v Roma semi-final and was assaulted during an altercation between Roma and Liverpool fans near to the Albert pub at about 7.35pm.

"Witnesses report that the victim was hit with a belt and then fell to the ground."