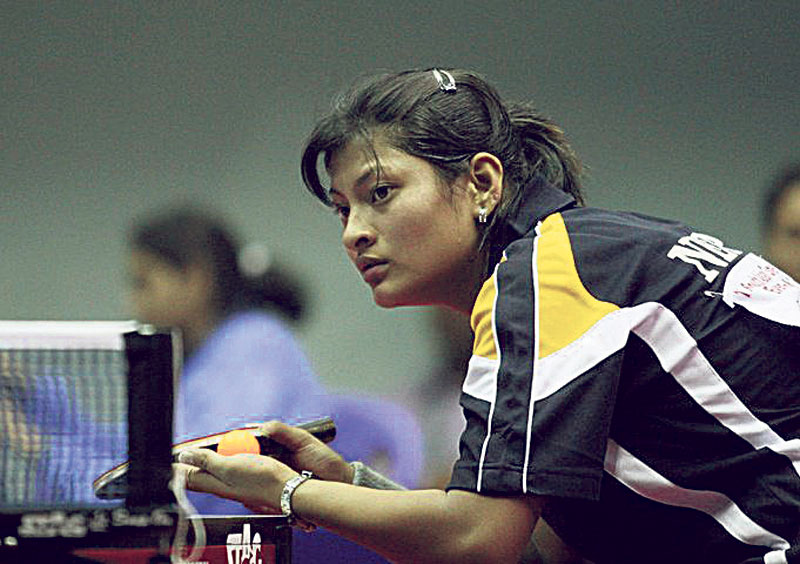 KATHMANDU, July 15: Nabita Shrestha, one of the five nominees of the People's Choice Award category of Pulsar Sports Award 2072, is at her career best. The tennis queen has ruled the board at domestic level since last seven years remaining unbeaten.

She will be competing alongside with youth cricketer Sandeep Lamichhane, footballer Nawayug Shrestha, weightlifter Tara Devi Pun and volleyball player Prativa Mali in the category of Sports Award to be held in the capital on July 21. The winner among them will be decided on the basis of number of SMS votes and Facebook likes. Four Facebook likes will be equivalent to one SMS vote.

The 24-year old stamped her status as number one female tennis player since Gita Thapa announced her retirement from the game in 2067 (BS) and the year 2072 turned to be special one in her career as a player.

Pairing with her sister-in-law Elina Maharjan she won bronze medal in women's double event of the 12th South Asian Games (SAG). Nabita not only emerged champion in five national tournaments in a row but also won eighth title in women's singles. Her success has even crossed the South Asian frontier.  She was the key player of Team Nepal when it defeated 59th ranked Estonia and Pakistan during World Team Table Tennis Championship in Kuala Lumpur. She had won two matches each against both the teams. Similarly, Nabita had also won a match each against Congo and Algeria which Nepal eventually lost.

Nabita also earned winning results in women's singles event against Venezuela and Pakistan players during World Table Tennis Championship held last year. She also made to the knockout rounds of 28th Universiade Games defeating Algeria and Sierra Leone players. With one after another success she leapfrogged to 423 in the World Ranking. Ranking within 500 is considered remarkable achievement in table tennis.

“I am here due to the support of family and coach, especially my husband Rakesh Maharjan and I thank him,” she said. Rakesh is also a table tennis coach.

Commenting on Nabita, table tennis coach Nabin Suwal said, “Nabita has positive thinking with strong physical and mental aspect. Other female players are far behind her level. Thus she is likely to rule women table tennis for few more years. Her competitors have to double their effort to match her level.”

The Sports Award will reward sportsperson in various eight categories. The winners of male, female and peoples' choice award will be rewarded with a motorbike and the winners of remaining five categories - youth, coach, para, special and lifetime achievement award will get Rs 50,000 each.

ITAHARI, June 22: The water level in the Saptakoshi River has reached at danger mark on Wednesday morning due to... Read More...