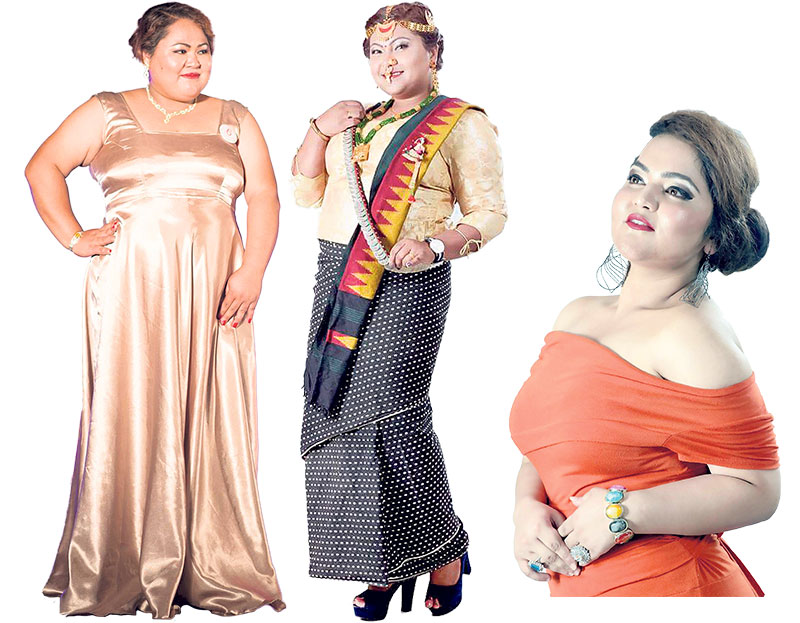 Despite many women struggling to fit into the societal standards of being ‘perfect’ and a certain shape (read skinny), some women are trying to challenge this idea of ‘beauty’, forcing the society to see it for what it is and not what they think it should be.

“What’s your idea of a good model?” When this scribe asked this question to people around town, a majority of them said it should be someone with first, a good body, and second, that person should have distinct facial features. When questioned what if the person was a little on the heavier side, many were surprised and even a little appalled. Driven by a stereotypical definition of beauty – one that involves size zero figures and high cheekbones – many people even said that plus size models aren’t really ‘models’. Some went a step further and said that these women were only good for the ‘before section’ of gym or weight loss advertisements.

To change this mindset was one of the main reasons why plus size women like Kriti Bartaula ventured into the world of modeling. “I have always been very comfortable with my body and am also quite confident about my abilities. But there are many girls who are very insecure about their bodies. I want to show these women that there’s nothing wrong about being a size too big,” says Bartaula, who is the second runner up of Nepal’s Chubby Models 2017.

While Bartaula’s first and foremost reason for becoming a model was to encourage other plus size people to be more accepting of their bodies, others like Minu Tamang wanted to give modeling a shot just to see if it could give her some much-needed confidence boost. Tamang always had a problem being out in the public because of her size. And though her family was kind and supportive, it didn’t do much where her self esteem was concerned.

But now, after months of training and learning how to model, she is at a better place, she says. As the first runner up of Nepal’s Chubby Models 2017, she believes she has come a long way but there’s a longer way to map out. However, it wasn’t an easy journey and she doesn’t expect things to get any easier. It never is for plus size people, says Tamang who believes our society’s mindset regarding models is set in stone. Also, as it is, modeling still isn’t considered a respectable career choice in many Nepali households and if you are on the chubbier side then people are even more opposed to the idea.

Aashish Kumar Mishra, event manager and choreographer of Nepal’s Chubby Models, says that it is the mentality that unless you are a certain size you can’t be a model that hinders most plus size women’s chances of even considering modeling as a career. Mishra says it’s common for women to be concerned about their looks but for those who don’t fit the society’s ideals of beauty, things are even harder.

“Only a few plus size women consider taking up modeling. And when they gather the courage to do so, they get to hear so many snide and hurtful comments that the journey becomes tougher than they anticipated. And that’s if they don’t give up midway,” he says.

Sapana Rai, winner of Super Plus Size Models 2018, agrees with Mishra and says that she always wanted to try modeling especially after watching Miss Nepal shows on TV but her family didn’t want her to get into, what they considered, the murky world of modeling and she chose to become an RJ instead.

Whether it is for an ad campaign of a brand or to endorse some beauty products, history shows certain types of models are preferred. We rarely see plus size women on hoarding boards or advertisements on TV. Mishra is of the opinion that it’s because companies don’t want to risk trying anything new as they fear their target audience will not appreciate it.

“As modeling agencies, we also have to listen to our clients’ demands and hire models accordingly and the sad fact is that, even though we want to encourage plus size models, the opportunities are limited,” he adds. According to him, the problem here is that we continue to see fashion predominately on thin bodies because we think that’s what sells. The fact is we have been fed that idea for so long that we don’t know what the alternative would look like or how it will be received.

However, he is also quick to point out that the scenario is slowly changing and there are a lot of positive changes underway. Take, for instance, the Nepal Chubby Model contest that was organized in 2017 with an aim to provide a platform to plus size women who wanted to dabble in modeling. Mishra adds that the pageant was also a way for the public to get used to the idea of plus size models. Likewise, Super Plus Size Models was another beauty pageant organized in 2018 for similar reasons.

Though these beauty competitions have helped many plus size women be confident and at ease with their bodies, do they actually open some doors and help them further a career in modeling? Tamang says there’s still a lot of work to be done for that. Though she considers herself lucky to have been able to shoot for a clothing brand, she hasn’t received other modeling offers as yet.

Rai, however, believes change is imminent. As the winner of Super Plus Size Models 2018, she has received offers for roles in serials, music videos, and movies as well. She says the Nepali film industry, barring a few, doesn’t have many petite or size zero female actors, and that the industry definitely seems to prioritize talent over looks. And this, she considers, to be a sign for a better future for plus size models.

“Your size shouldn’t dictate your life and your abilities. Who said plus size women can’t be models? After all, there is no size requirement for a lipstick or a mascara,” says Rai. And Mishra too feels that change, albeit slow, is definitely on the cards. “I have seen many skinny models obsessing about their weight but now that plus size models are a global trend, they, on some level, seem to understand that weight alone has nothing to do with being a good model,” he says.

Even though, globally, plus size fashion and its models have been getting a lot of press, the modeling industry at large has always been known for having issues with setting examples of a healthy body image. This is even truer in Nepal’s context where the concept of plus size models has yet to catch up. In a culture where body or ‘fat’ shaming dominates and the synonym of beautiful seems to be skinny, it will take a lot more than a handful of plus size models and beauty pageants to change this narrow minded attitude and for the society to become truly accepting of beauty as it is.

UML Chair Oli contracts COVID-19
5 hours ago
Moderate snowfall, rain predicted in most parts of Nepal till Monday
6 hours ago