Challenge to democracy: Lessons from Myanmar 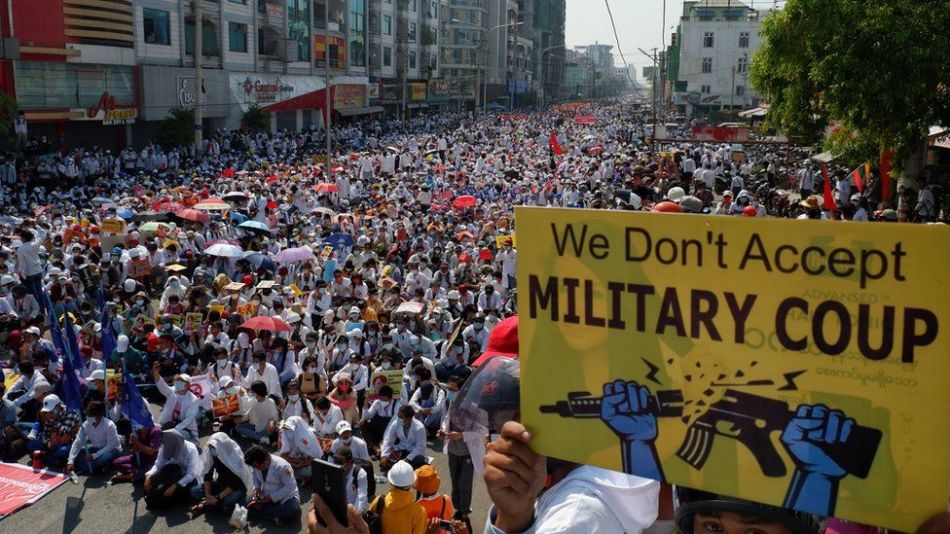 PM Oli’s assault on democracy is no less than that of any autocrats. Though the Supreme Court has restored the House, the country is trapped in uncertainty and vicious cycle of instability.

One month after Myanmar military known as Tatmadaw staged a coup on February 1 against the elected government, civilian protests have intensified countrywide with increasing number of casualties. As the Army responds with sophisticated weapons of repression to stifle any dissent and eliminate any possible election bid and civilian return to power, Myanmar’s  envoy to the United Nations  U Kyaw Moe Tun, denounced the army coup and pleaded for restoring democracy  before the United Nations General Assembly. This has raised stakes for regional countries and international community.

Freshly elected parliament was set to begin its fresh term on February 1.  Tatmadaw put  an end to a decade long democratic transition, and announced a state of emergency for one year, detained elected National League for Democracy (NLD) leaders and officials including State Counselor Aung San Suu Kyi, and the country’s president Win Myint, to restore what it called “order and stability.” Army transferred all executive, judicial, and legislative powers to the commander in-chief of defence services Senior General Min Aung Hlaing and said it would control the government to examine the alleged electoral irregularities before holding a new election.

Myanmar (previously Burma) had a brief democratic experiment in the 1950s. In military held elections in 1990, NLD had won but was refused power. The 2015   elections gave 322 seats to NLD out of 476, and transition from military to civilian government came under the 2008 military-drafted constitution which guarantees 25 percent representation for army in national and regional assemblies. Three key ministries—Home, Defense and Border Affairs—are to remain with the Army.

The 2008 constitution has provision for Army to take power to prevent any situation that “may disintegrate the Union or disintegrate national solidarity or that may cause the loss of sovereignty.” On November 8, 2020  elections, NLD overwhelmingly won 396 seats out of 476, while army-backed Union Solidarity and Development Party (USDP) just got 33 seats. Suu Kyi had gone to the people promising to amend the constitution and reduce the power of the Army.  Alarmed by the election results and fearing loss of its power grip, the army acted citing election fraud. The voter fraud case reached the Election Commission which said there was no evidence of any fraud.

Journalist and the author of The Burmese Labyrinth,  Carlos Sardina Galache wrote in twitter: The coup in Burma is partly a self-coup that, on the face of it, doesn’t make much sense, as the system designed by the military has been working pretty well for them, even with an elected NLD that has given ample proof that doesn’t threaten their interests.

How the world reacted

Geopolitical weight is shifting to the Indo-Pacific region. Myanmar shares border with China and India. Its strategic location in the region makes it a key country of the great power rivalry between the US and China in Southeast Asia. The strategic importance of Myanmar is growing for China, India and the United States.

In recent years, there has been no countries in the Southeast Asia to be able to compete with what China is offering and able to deliver. India is no match to China. China’s initiatives are far wider and larger. Beijing’s intensified engagements with countries across the region seek to contain  any powers gaining an upper hand. Military coup coming against the backdrop of a deepening US-China rivalry makes Myanmar a front-line state in Southeast Asia, which has witnessed geopolitical competition for global leadership.

State Counselor and Foreign Minister of China Wang Yi was in Myanmar’s Nay Pyi Taw on January 11 and met with both civilian and military leaders. In his meeting with chief of defense forces Hlaing, Yi appreciated that Military takes revitalization as its mission, thinks about the future development of its country from a long-term perspective, makes commitment to the traditional friendship between China and Myanmar and promotes the “Paukphaw” (fraternal) friendship between the two countries. Hlaing said Myanmar is very pleased to witness China’s rising’s international status and influence… Myanmar military stands ready to continuously play an active role.”

China hopes all sides in Myanmar can properly manage their differences under the constitution and legal framework to uphold political and social stability. It has stayed away from calling on the military to reverse the military action. Beijing vetoed earlier UN Security Council resolution that would condemn the coup in Myanmar. Later it allowed the UNSC to issue a statement on Myanmar’s internal political crisis instead of military coup. As a rising power, China would like to secure for itself its energy security, extended corridor connectivity and border security.

The United States expressed grave concern and alarm and called on Burmese military leaders to release all government officials and civil society leaders and respect the will of the people of Burma as expressed in democratic elections on November 8. It condemned the military coup and called upon to reverse these actions immediately, and respect people’s aspirations for democracy, freedom, peace, and development. The US has imposed sanctions and put a freeze on the funds which military rulers tried to move out of the US. However, these sanctions are believed to have only marginal impact. In past also, despite the lifting of sanctions, the Western businesses and US companies did not go that far to make progress.  However, investments continued to flow from China and other Asian countries, including Japan, India and South Korea.

India noted the developments in Myanmar with deep concern and said it has always been steadfast in its support to the process of democratic transition in Myanmar. It called upon to uphold the rule of law and the democratic process. Myanmar shares 1,640 kilometers border with India.  Security relations and army-to-army contacts between Myanmar and India are good, as reflected in Indian army chief’s visit to Myanmar last year. India is concerned about maintenance of security and stability in their border areas. Both Myanmar and India have reiterated their mutual commitment not to allow their respective territories to be used for activities inimical to each other.

Burma has many ethnic groups with their armies with closer links across the borders. The cross-border links in Myanmar makes its northern border a perpetually unstable geopolitical landscape. The ethnic armies remain the biggest threat to the central government. China’s support is critical to advance peace process with armed ethnic groups along the northern border. Some of these groups are said to be listed as the world's largest narcotics trafficking organization. The brutal operation to drive 740,000 members of the Rohingya minority, now sheltered in neighboring Bangladesh, was said to have been carried out in 2017 under the command of General Min Aung Hlaing. Suu Kyi’s defense of army action made her a less sympathetic figure in the eyes of human rights world. China has offered to mediate in the Rohingya crisis.

Expanding economic interests and several leverages give China political weight making it a key player to Myanmar’s nation-building efforts. This gives opportunities to China for expanding its diplomatic, economic, and political footprints. China is worried that instability and fractured political scene will raise questions about its numerous projects in the country.

Myint-U Thant, Burmese historian, in his book Where China Meets India: Burma and the New Crossroads, quotes a former Burmese officer telling him, “we know that India cannot really balance China for us. We would like better relations with the Americans, but as long as they are only interested in ‘regime change’ there is really nothing to talk about. They say ‘release Aung San Suu Kyi or do this or that and then we will see how we might improve ties with you, how we might decrease sanctions.’ We do not like sanctions, but we can live with them. We are asked to make risky concessions in return for vague promises. May be this works with other countries but won’t work with us.”

Burma stands as a test case for the Biden administration.  President Biden has said that he would reach out partners in the region to marshal the world’s democracies against authoritarian states. China’s focus has been on economic and strategic interests, and US’s more on democracy and human rights. The US looks catious not to lose space to China.

Nepal reacted to the coup cautiously and called upon all parties to respect the will of the Myanmar people. It called for the immediate release of civilian leaders including President U Win Myint and State Counselor Aung San Suu Kyi. It also hoped that the democratic and constitutional process will be restored soon.

Nepal has historical, cultural, emotional, political and democratic links with Myanmar. A significant number of people of Nepali origin have chosen Myanmar as their permanent home. Democratic leaders of the two countries enjoyed good relations.  Aung San Suu Kyi was invited to Nepal to be the chief guest of a program to mark the 100th birth anniversary of the first elected Prime Minister of Nepal BP Koirala in 2014. She delivered a keynote address on the “relevance of social democracy’. Then Prime Minister Sushil Koirala had spoken of Aung San Suu Kyi as a “power of powerless,” and symbol of moderation, toleration, reconciliation, and commitment to non-violence.

Myanmar Army is moving back to the armed approach for nation-building—a failed approach in Myanmar and elsewhere. Nation building is inconceivable without people’s participation. In 2005 Nepal’s King Gyanendra trampled the 1990 constitution in the name of restoring “meaningful multiparty democracy.” When king decided to compete with political parties for power, nothing was under control when the people’s movement reached its climax.

Now Prime Minister KP Sharma Oli has shown little tolerance of democratic institutions, norms, and processes. His assault on democracy is no less identical than that of any autocrats. Though the Supreme Court has restored the House, the country is trapped in uncertainty and vicious cycle of instability.

Burmese historian U Thant Myint wrote on twitter after coup on February 1: “I have a sinking feeling that no one will really be able to control what comes next.”

The situation of geo-strategically important Nepal looks no different.