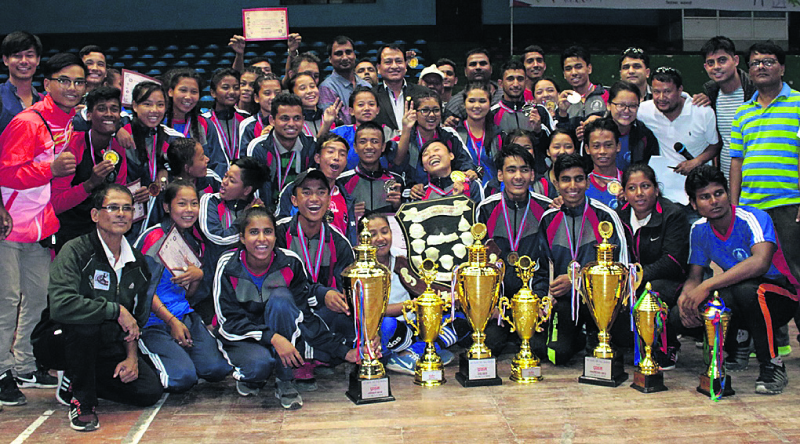 KATHMANDU, July 8: The Central Region became the champion of the 9th President’s Running Shield and School Sports on Saturday with total points of 293 from different categories.

Karate, wushu, taekwondo, cricket and football were other events featured in the running shield. Points of these categories were not calculated.

VOLLEYBALL
Western Region and Central Region clinched gold medals in boy’s and girl’s volleyball events on Saturday. To become the champion in the boy’s section, unbeaten West accumulated 12 points in the completion held in round robin league format while the Central Region and Mid-western Region finished in second and third positions with eight and five points respectively.

ATHLETICS
Prakash Danuwar of Eastern Region set new national record at the school level in boy’s 400m sprint in the ninth President’s Running Shield and School Sports on Saturday. He completed the race in 50.20 seconds to surpass the record set by Krishna Mahato of 52.8 seconds in 2001. Similarly, Central Region’s Bhuwan Mahato and Western Region’s Sandip Chaudhary wrapped up the race in second and third positions respectively.
In the girl’s 400m sprint, Anita Bhul of Far-western Region secured first position completing the race as she clocked one minute 07.25seconds while Kalpana Shrestha of Western Region and Kajol Bista of Central Region finished the race in second and third positions respectively.

Central Region’s Birendra Chaudhary bagged gold in the boy’s javelin throw with a throw of 45.65 meters. In the same event, Ramesh Pokharel of Far-west and Santa Ram Majhi of Central won silver and bronze respectively.

Similarly in the girl’s javelin throw, Far-west’s Khageswari Thagunna clinched the gold with a throw of 25.19 meters while the silver and bronze medals went to West’s Sunita Thapa and Central’s Alina Khadka respectively.