Celebrations across towns and villages as VNY 2020 kicks off 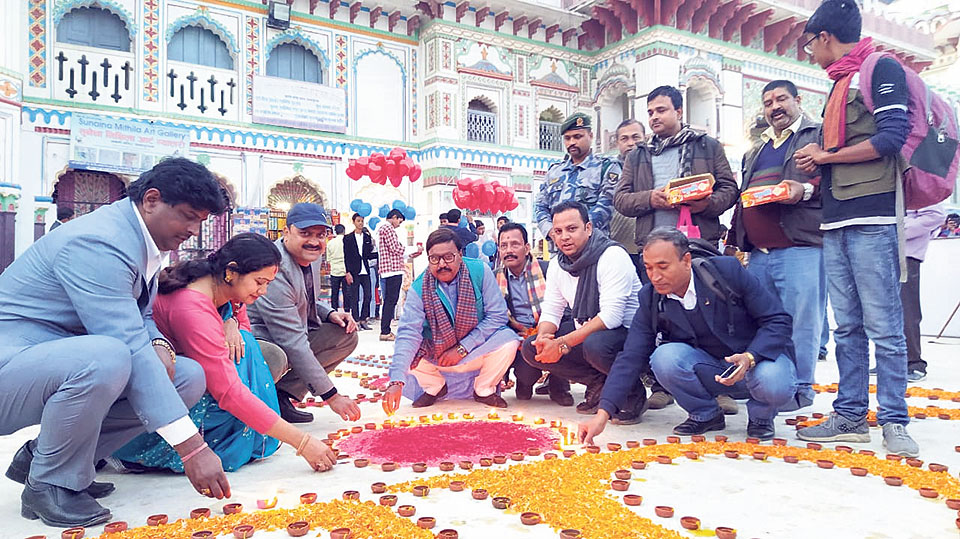 People lighting lamps to mark the launch of the Visit Nepal 2020 campaign on the premises of Janaki Temple in Janakpur on Wednesday. Photo: Republica

KATHMANDU, Jan 2: Thakurdwara of Bardiya on Wednesday morning witnessed a huge crowd as they gathered to celebrate the commencement of the Visit Nepal Year 2020. People from all walks of life had taken interest in the initiative while the presence of key persons from government offices and social sector had graced the event.

Tourism entrepreneurs had tried their best to draw the attention of the people to the activities that ranged from showcasing of culture to foods to local productions in stalls set up in the area.

Speaking at the program, chief minister of Province 5 stated that the province should take VNY as a great opportunity to promote the flora and fauna of the region. He had arrived at the stage later than the schedule drawing instant criticism though. "We have to utilize 2020 to promote our place to the maximum. The government and public should work hand in hand to make the year a grand success," he said. He was however not precise about what kinds of plans the government has in order to draw tourists to the region.

Meanwhile, the ambiance of Janaki temple and the surrounding area was different on Wednesday. Cultural shows on the premises of the temple stole the people's attention throughout the day. In the evening, the lightening of lamps around the temple created even more spectacular moment. Interestingly, the organizers offered 2020 laddus (sweet) to the temple to mark the beginning of the year 2020. Indigenous music and dance performed by seasoned artists had made it a memorable event. From the temple premises, 2020 balloons were also released in the air.

"In the morning, we had carried out a procession, which was joined by a huge number of people," said Manish Jha, the province coordinator for VNY. "We have lots of expectations from the VNY. We are working hard to make it a success," he added.

In Bara, 60 bicycles and 192 motorcycles organized a rally in the morning. The riders had covered 26 kilometers with flags of VNY. This was looked upon by thousands of onlookers with a great amazement.

Many other villages and towns of Province 2 witnessed colorful events to mark the beginning of VNY on Wednesday.

To welcome VNY on Wednesday, flowers were thrown off at Shahid Gangalal Stadium in eastern Nepal from helicopters. A huge crowd had participated in the event. Speaking at the program, chief minister of Province 1 Sherdhan Rai stated that 'the much-awaited time has come'. He stated that the government is ready to do everything possible to help the tourism sector prosper.

Among 100 top tourist destinations, Province  1 boasts of having 36 of them. "We have Mt Everest and many other high mountains. Similarly, we are very rich in wildlife," said Rai, during his speech.

PANCHTHAR, Dec 16: Poor infrastructure in eastern Nepal will be a major hurdle as it prepares to celebrate Visit Nepal... Read More...