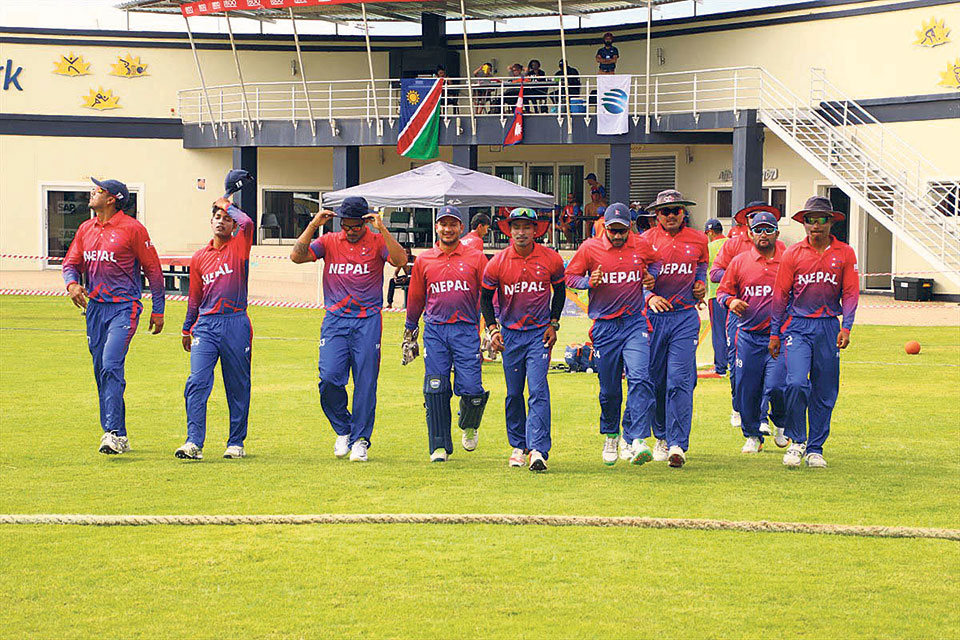 Nepal’s cricket players enter the ground during their ICC World Cricket League Division Two match against Namibia at the Affies Park in Windhoek, Namibia on Thursday.

KATHMANDU, Feb 9: A conservative batting approach by Nepal chasing the target of 139 set by Namibia saw them win the first match of the ICC World Cricket League Division Two by a wicket at Windhoek, Namibia on Thursday.

The aptly nick-named ‘crisis-man’ Basant Regmi held his nerve scoring an unbeaten run-a-ball 24 to secure the win for Nepal in the last over of the match. He smashed a crucial six in the penultimate over followed by a four in the last to seal two points.

Nepal started cautiously after losing the early wicket of wicket-keeper batsman Dilip Nath for naught. He was dismissed by left-arm pace bowler Johannes Smith in his fourth delivery of the match. Skipper Paras Khadka promoted himself to bat at number three and managed 19 runs from 35 deliveries with two boundaries before losing his stumps to Craig Williams as the lunch break was taken in the 13th over. Gyanendra Malla crawled his way to 10 runs from 38 deliveries opening the batting for Nepal and remained not out to resume his innings after the lunch.

After resuming, Nepal lost the next four wickets adding only 23 runs to the total. Malla was dismissed for 15 runs from 45 deliveries falling to Williams caught by the substitute fielder. Left arm spinner Bernard Scholtz dismissed Aarif Sheikh for a duck, clean bowled Dipendra Singh Airee for six runs and Karan KC for three runs to leave Nepal reeling at 6 for 56 at the end of 24th over.

The match continued despite drizzle around 30th over. Sharad Vesawkar combined with debutant Rohit Paudel to stitch a partnership of 37 runs before being caught excellently by Williams at second slip. Vesawkar scored 29 runs from 67 deliveries including three boundaries. Paudel, joined by Sompal Kami at crease, fell for 17 runs playing 60 deliveries being the fourth wicket for Scholtz in the match. Heavy rain arrived at the end of 43rd over as Nepal was left struggling on nelson figure 111/8 with Sompal not out on 11 runs and Basant Regmi joining him at the crease.

Play resumed after a slight break to see Sompal lose his stumps to Williams in the 47th over. Sompal made 13 runs from 29 deliveries but could not take Nepal over the line. Williams picked up three wickets in the match. The left arm spinner Bernard Scholtz bagged a 4-wicket-haul conceding 11 runs from his nine overs in the match.

With 18 runs to win, player of the match Sandeep Lamichhane played second fiddle to Regmi’s exploits at the other end which eventually sealed the match for Nepal in the last over.

Earlier, Nepal won the toss and invited Namibia to bat first. Sompal Kami, the opening fast bowler dismissed Louis van der Westhuizen in his first over of the match. Stephen Baard then tried to keep things moving with three fours before conceding a catch to keeper Dilip Nath off Sompal.

Baard scored 18 runs from 16 deliveries with three boundaries opening the innings for Namibia.
The in-form batsman Craig Williams then launched a counter attack to unsettle the opening bowlers. Williams made 41 runs from 34 deliveries before falling LBW to IPL starlet Sandeep Lamichhane. He smashed eight boundaries in his innings.

The host team was reduced to 81/6 at the end of 17th over losing wickets of Jean-Pierre Kotze, Gerhard Erasamus and Sarel Burger adding six runs to the total from being 75/2 in the 12th over. They kept loosing wickets as Nepal skipper Paras Khadka rotated his bowlers not letting the batsmen to settle.

Sixth bowler of the day Sharad Vesawkar, Basant Regmi, and the skipper himself picked up a wicket each to limit the African nation to 7 for 116 in the 26th over. Jan Frylinck added crucial 22 runs towards the end of the Namibia innings stretching the total to 138 runs before getting all out in the 35th over.

Sandeep Lamichhane was pick of the bowlers scalping four wickets conceding 18 runs in his 8.2 overs. Sompal complemented the leg-spinner dismissing top three batsmen in the Namibian batting order. Karan KC was wicket-less and conceded 22 runs bowling three overs in the match.
Elsewhere, the United Arab Emirates (UAE) skipper and player of the match Rohan Mustafa scored 73 runs and picked up two wickets to deliver a memorable win by 218 runs against Kenya.

The UAE scored 309 runs in their 50 overs before dismissing Kenya for 91 runs. Similarly, Canada bowlers had a field day against promoted team Oman bundling them for 106 runs before completing the chase in 15.4 overs by eight wickets. Canada skipper Nitish Kumar scored an unbeaten 53 runs including four sixes and three fours to guide his team home during the chase. Canada’s Nikhil Dutta who picked up three wickets in the match conceding 11 runs was adjudged player of the match.

Nepal will face Oman in the second match of the ICC WCL Division Two on Friday. Canada will face the UAE and host team Namibia will take on Kenya on the same day.