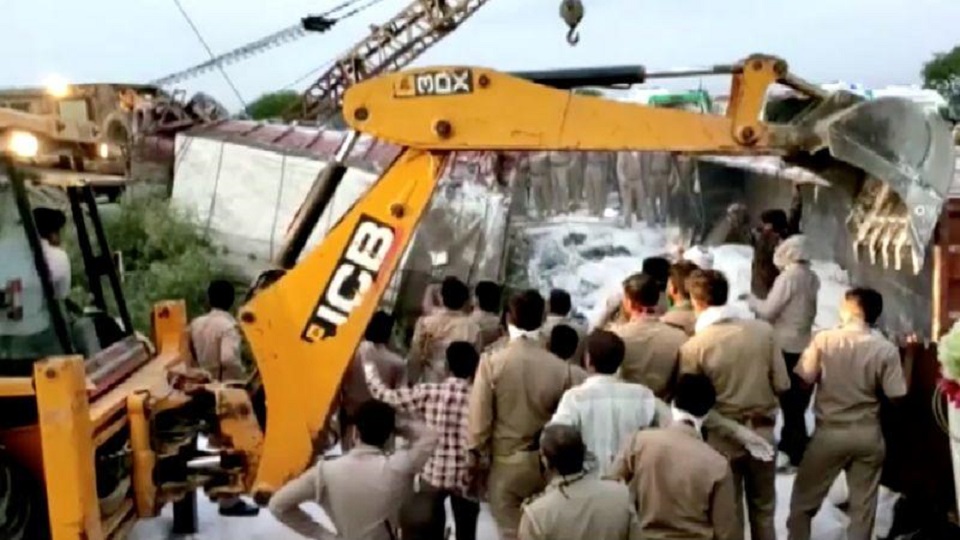 A police rescue team work to lift a truck at the site of an accident where a truck carrying migrant labourers collided with another, killing and injuring several people in Auraiya, Uttar Pradesh, India, May 16, 2020 in this still image taken from video. ANI via REUTERS TV

LUCKNOW, India, May 16: A truck crammed with migrant labourers trying to reach their distant homes amid a nationwide lockdown crashed in northern India on Saturday, killing at least 23 and injuring 35.

The accident occurred before daybreak, when the truck collided with another truck that was parked by a roadside eatery in the Auraiya district of Uttar Pradesh state, Abhishek Singh Meena, the top district official said.

“The rescue operation is almost complete and 23 people have been killed in the accident,” Singh told Reuters, adding that 20 people had suffered serious injuries, while the rest had minor wounds.

The migrants mainly hailed from the states of Bihar, Jharkhand and West Bengal.

India locked down its 1.3 billion citizens almost seven weeks ago in an attempt to prevent the spread of the novel coronavirus, sparking a crisis for the hundreds of millions of Indians that rely on daily wages to survive.

With no work - and little public transport - many urban migrants attempting to return to their home villages have set out on gruelling journeys on foot, or hitching rides in the back of trucks.

On May 13, six migrants walking to their homes in Bihar were crushed to death by a speeding truck in Muzaffarnagar, also in Uttar Pradesh. Three others sustained serious injuries. The driver was arrested.

On Friday, UP’s Chief Minister Yogi Adityanath ordered bureaucrats and police officers across the state to arrange buses and taxi cabs to ferry migrants back to their hometowns. No one should walk, cycle or travel by trucks, he said.

Coronavirus infections in India crossed 85,000 on Saturday, surpassing China, though officials credited the lockdown for slowing the contagion.

Indian state and federal governments have provided additional funds to feed and house migrants, as well as some special buses and trains.

Coronavirus pandemic has engulfed almost all countries around the world. The number of infected person and subsequent death has reached... Read More...